The First Results of the European CIK-FIA Championship Challenge 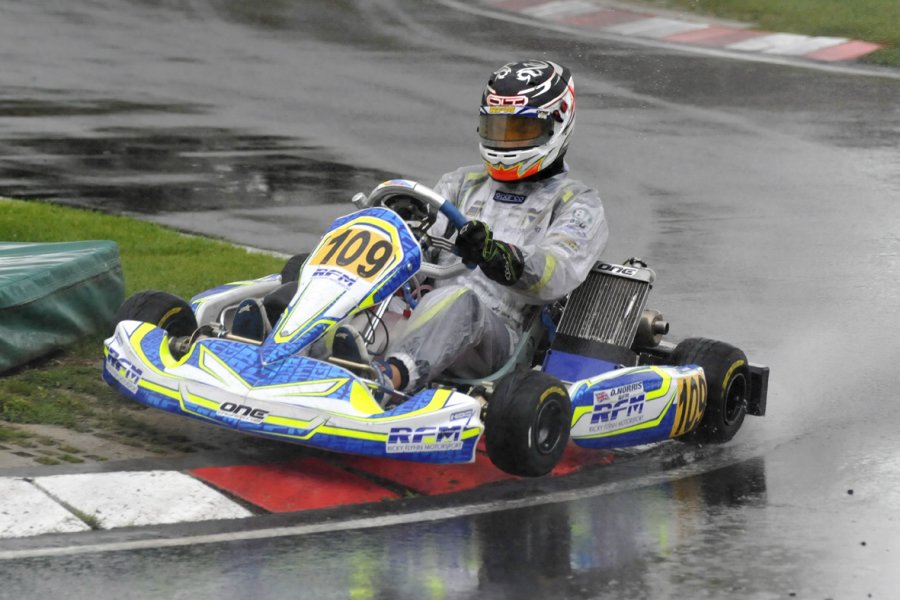 At the PF International Circuit of Brandon, the final assault to the European CIK-FIA Championship for KF and KFJ has started. On the circuit set in Lincolnshire, in the heart of England, today’s qualifying has given a first picture of the situation: the definitive battle for the top positions of the Championship is at its turning point, just before Sunday’s great finale. The Championship is at its fourth and last appointment of the season, after the rounds both categories ran in Italy, in Muro Leccese, and in Spain, in Zuera. The KF, then, raced in Genk, in Belgium, while the KFJ ran recently in Kristianstad, in Sweden. So, The two direct-drive categories are going to race together again in England, under the typical British weather: low temperatures and light showers have been today another test for the 107 scrutineered drivers. The 2014 season has been demanding and selective: the Champions that will be crowned next Sunday will have deserved their title.

Oliver Norris hits the first target
The driver who managed to master a suddenly slippery track was the English Oliver Norris (FA Kart-Vortex-Dunlop): the driver from Gastonbury drove under a heavy drizzle stopping the clock at 1’13”470, 111 milliseconds faster than the Italian Alessio Lorandi (Tony Kart-Parilla-Dunlop). The sudden and heavy rainfall deeply changed the technical programme of every driver, after this morning’s free practice had taken place on dry track. The wet asphalt was the ideal playground also for the French Julien Darras (ArtGP-TM-Dunlop), third at 0”171. Fourth place for the English Oliver Hodgson (Kosmic-TM-Dunlop), who finished ahead of the Irish John Norris (Mach1-TM-Dunlop). Surprisingly, we find none of the top drivers of the Championship in the first positions: 12th position for the leader, the Danish Nicklas Nielsen (Kosmic-Vortex-Dunlop), while the English Callum Ilott (Zanardi-Parilla-Dunlop), his direct rival, is 7th. The British Tom Joyner, reigning World Champion and third in the Championship standing, is only 13th. There are great expectations for the remaining races of the weekend, beginning with tomorrow’s qualifying heats.

In KFJ Beckmann is the best on wet asphalt
Even if it is very hard, David Beckmann (Tony Kart-Parilla-Vega) still stands a chance to close the gap in KFJ. He is currently in 10th position in the Championship, but his recovery could start from today’s result: the German driver set the best time thanks to his 1’14”038. On the wet track he was a tenth of a second faster than the Brazilian Felipe Drugovich (Kosmic-Vortex-Vega). Third place for the English Daniel Ticktum (Zanardi-Parilla-Vega), 0”410 behind, followed by the American Logan Sargeant (FA Kart-Vortex-Vega) at 0”418 and by the Brazilian Gabriel Sereia (Exprit-LKE-Vega) at 0”518. With the exception of Ticktum, second in the Championship, also in KFJ the top drivers did not perform brilliantly: the English Enaam Ahmed (Tony Kart-Vortex-Vega), the current leader, is seventh, while the American Devlin Defrancesco (Tony Kart-Vortex-Vega), third in the Championship standings, will have to close the gap starting from the last rows of the grids. Great expectations for  a great finale in KFJ too.

The final sprint of the European Champs live in streaming

Such a gripping programme deserves the great commitment of WSK Promotion. The live streaming of the event will be available on Sunday from 11.00 (local time) – with the drivers’ parade – until the end of the Finals. The delayed broadcast of the races will be aired on Wednesday 3rd September at 18.00 on Rai Sport 2. Always on Rai Sport 2, on Friday 5th, the special TV report with the recap of the whole British weekend.