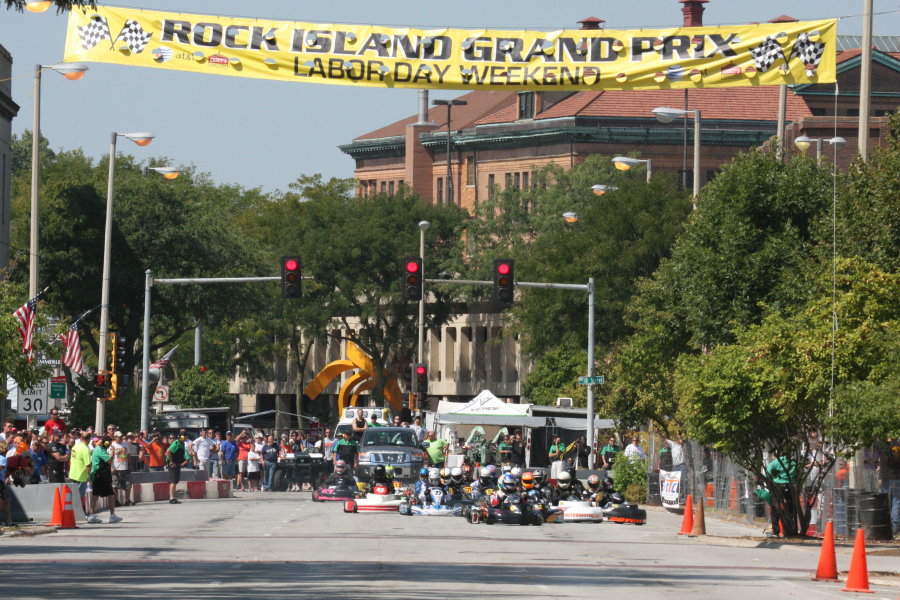 For the 20th time, karters will converge on the Quad City area to celebrate the Labor Day weekend, competing in the annual Rock Island Grand Prix presented by AT&T. The streets along the Mississippi River will convert the Illinois city Friday evening into a two-day karting festival. The event brings together a large pool of racers from many different genres of the spot, from club, regional to national level talent, along with those from dirt, oval, sprint and road racing. With the theme of ‘The Most Fun You Will Have in Karting On and Off the Track’, the weekend is shaping up to be an exciting event.

eKartingNews.com will once again provide the Trackside Live program, allowing those who are unable to attend to catch the action live. Play-by-play of EKN’s Rob Howden will be streamed on the eKartingNews.com/live, which includes live timing courtesy of Race Monitor. Daily reports, paddock insider notes, and forum updates on the Official Discussion Thread will be published throughout the weekend. For those on the move, you can listen directly from your phone with the EKN Mobile Link. Watch for updates to be published on Facebook, Twitter and Instagram. 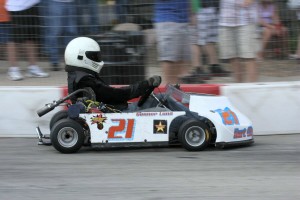 The event is put on by a long list of volunteers, as the RIGP continues its run as a non-profit organization. Jumer’s Casino & Hotel is the sponsor of the cash purse, which is scheduled at over $10,000 to be paid out to the 13 categories competing. A special TaG Senior race on Saturday – the Valspar Race Against Hunger – will benefit the River Bend Foodbank. Racers will donate non-perishable food, with their starting lineup determined by the number of pounds they provide. Food will be collected both Saturday and Sunday at the three main crosswalks around the course. Cash donations can also be sent to River Bend Foodbank on behalf of the Grand Prix. Saturday will also feature a vintage kart race, featuring machines from the 1950s, 60s, 70s and 80s.

The largest categories of the past three years has been the Briggs & Stratton LO206 divisions. This year, three classes will be provided after just one was offered in 2012. The 2014 edition will field a Medium, Heavy and Masters divisions. The Heavy category currently has 23 racers, with 2012 inaugural winner Connor Lund the favorite. He will be racing four categories, including Briggs Medium at 17 drivers, along with the Clone Medium and Heavy. Lund won the Clone Heavy event in 2012, and is looking to pull off a ‘Gary Lawson-like’ weekend by winning all four races he is entered in.

Some of the best racing took place in the Yamaha Can divisions last year, as you can see by the EKN On-Board from veteran Todd Bolton.

Last year’s Medium and Heavy wins were split by RIGP veterans Tony Neilson and Michael Dittmer. For Neilson, it was his first victory after numerous attempts in the Can division, while Dittmer notched his fifth in the Heavy category. 2012 winner Tony Jump is making his return back after a year off, as will former two-time winner Tim Goettsch.

The King of the Streets title was once the most coveted victory in shifterkart ranks. Unfortunately, the participation numbers have continued to fall, and this year’s field is among the lowest. One of the more intriguing stories of the weekend will be the arrival of Illinois native Josh Lane. The DRT Racing/DR Kart driver is scheduled to arrive Sunday morning after competing in Pittsburgh for a North East Shifter Kart Series finale on Friday and Saturday. Always among the quick drivers, and winner of the 125 Open category last year, Lane will need to be able to make it to Rock Island, and then try to compete come Sunday afternoon. 2011 winner Derek Crockett is making a return trip back, along with longtime competitor Scott ‘Skitchy’ Barnes from Bermuda. 2014 could mark a third straight win for a S4 competitor as two-time 125 Masters winner Lance Lane will also compete. Colton Aldridge was involved in a series wreck after a part failure sent him into the barriers. After suffering a couple broken ribs and a punctured lung, he’s returning back to the RIGP for redemption.

TaG Senior, Leopard, and TaG Masters will provide the three categories for the ‘Touch and Go’ division, which was brought into the United States by former RIGP race director Tom Argy Jr. 125 Masters and 125 Open Shifter round out this year’s class lineup. Two rounds of practice is scheduled to open up Saturday’s on-track with qualifying to take place in the afternoon. Sunday will be a warm-up with the 13 categories competing in the main events.