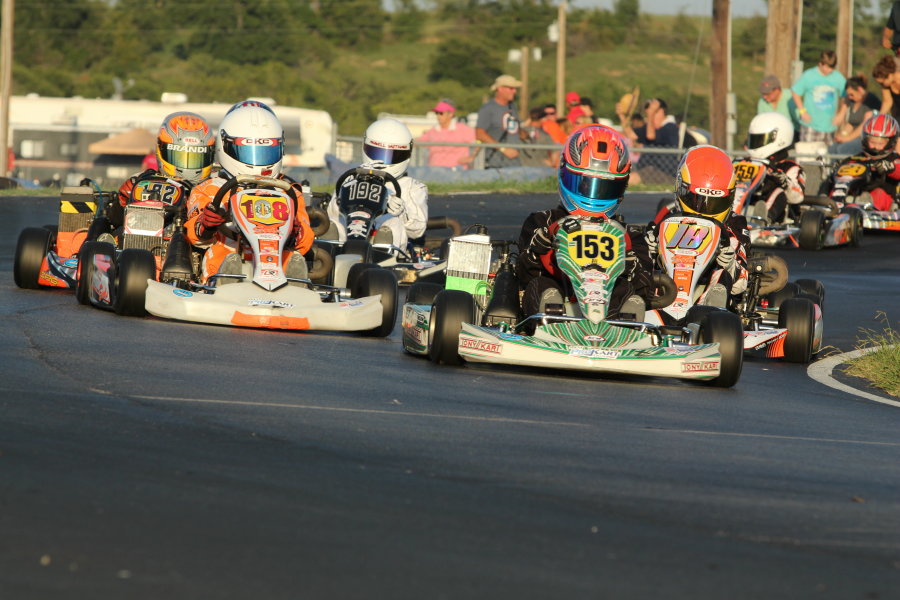 The 2014 Texas ProKart Challenge – presented by 3G Kart Racing/Burger King®/Chase Racing/Dallas Karting Complex/Fernelius Alvarez Attorneys – entered the second half of the season following the August 14-16 event at the North Texas Kartways. The Denton, Texas facility hosted a unique Thursday through Saturday event, featuring racing under the lights for all three days to escape the Texas summer heat. The weather was perfect for racing, until Saturday morning when rain made it way across the area. It quickly went away and racing continued in dry conditions, closing out the fifth and sixth rounds of the series.

Miguel Lopez entered the Denton weekend looking to add to his Pole Position/DR Kart S2 Semi-Pro Stock Motochampionship lead, and did so with two main event victories. Friday’s Round Five was a complete sweep, leading from qualifying to the final checkered flag. Lopez had the lone S1 Pro Stock Moto driver Jake French to keep chasing, and used it to secure the S2 win. The margin of victory was over two seconds, with Luke Shanahan runner-up and Sky Finley completing the podium. Sunday welcomed a wet track for qualifying, as Nathan Adds laid down the quickest lap of the session. The S2 rookie kept the top spot through the opening heat race, as Lopez fought his way into second from eighth on the grid. Lopez led all 10 laps of Heat #2, and went wire-to-wire in the main event for his fourth victory of the season. Shanahan was second with Adds securing the third step of the podium. 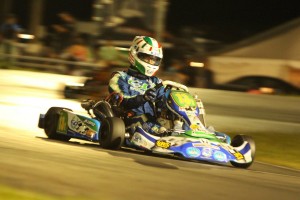 Chris Jennings moved his win total on the season to three with his first double-win weekend in the HPD/Honda S4 Master Stock Moto class. He and defending Pro Tour champion Jordon Musser have gone back and forth since last year, and continued this weekend with Jennings holding the advantage. The defending series champion swept Saturday’s Round Five, finishing the main event with a half-second margin of victory over Musser and Venkat Reddy in third. Musser stopped a weekend sweep, earning the fast time in the wet qualifying session on Sunday. Jennings returned to the top spot the rest of the day, winning both heat races and earning the main event victory by two tenths of a second. Musser and Reddy completed the podium.

Riley Dickinson put in a perfect weekend in Denton, sweeping the action in the Chase Racing Mini Max category. The point leader extended his by leading every session on Friday and recording a perfect score on Saturday. Chasing Dickinson in Round Five was Brandon Warwas – who recorded the fast lap in the main event to steal 10 bonus points toward the championship chase – and Alejandro Jaramillo. The result was the same in the main event for Round Six, except this time Warwas was just 86 thousandths of a second back at the checkered flag.

Nathan Adds made it three straight in the Dallas Karting Complex DD2 division, winning both main events at North Texas Kartways. Adds was the top qualifier Friday, winning the opening heat only to see him miss the second heat. That allowed CJ Cramm to take over the top spot and the pole position for the main event. Adds came storming back in the main event, taking over the lead early on and stretching out to a three-second advantage over Cramm with point leader Nathan Mauel in third. Ricardo Gonzalez set the pace in the wet qualifying session on Saturday, while Cramm took the win in the opening heat race. Adds returned to the point in Heat #2, and then drove away once again in the main event for his third straight in the series. Cramm and Gonzalez completed the podium. 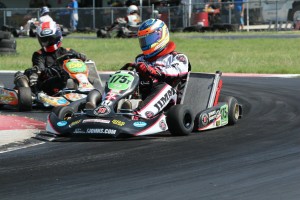 Chris Jennings put himself in the right path toward defending his championship with two wins in the S4 Master Stock Moto category (Photo: Dreams Captured Photography)

The RPM Race Karts S3 Novice Stock Moto category welcomed another first time winner with Garrett Ramirez taking the checkered flag both days. Ramirez swept Friday’s action, leading Austin Jeffries and two-time race winner AJ Hayes. Saturday began with Hayes at the point following the wet qualifying session before point Kyle Counts won his first heat race of the season. Ramirez picked up the win in Heat #2, and never looked back in the main event with a five-second advantage over Hayes and Jeffries. Paige Evans ran uncontested in the Turbo Lube/Motul TaG Junior category to extend her win streak to four on the season.

The Dreams Captured Photography TaG Master championship chase has been a duel in the first half of the season, with Juan David Gomez moving ahead in the race for the title. Gomez began as the top qualifier but was relegated back by his point standings rival Mathew Souza in the two heat races. Gomez outlasted Souza in the main event, as the heat race winner retired on lap nine. Souza opened up Round Six as the driver to beat, and continued to show the way through the two heats. Gomez got the jump on Souza as the 16-lap main event began, and held off the pressure to cross the line first by a slim 52 thousandths of a second. Doug Gruenberg finished third both days.

Maryland driver Kaylen Rex Frederick doubled up in his Kart Life TaG Cadet debut. Frederick swept the opening day of action, edging out point leader Jak Crawford at the line for the main event victory with Matthew Stretch in third. Saturday began where Frederick left off, posting fast time in qualifying and leading the way in the first heat. Crawford fought back in Heat #2, ending Frederick’s win streak on the weekend. He led nearly the entire way in the main event, until Frederick worked past for the lead on the final circuit to secure the victory. Crawford settled for second with Stretch once again in third. 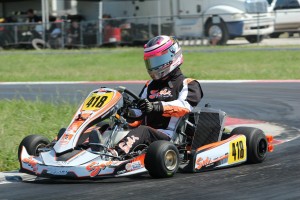 Nathan Adds made it three straight in DD2 competition with a double win weekend at NTK (Photo: Dreams Captured Photography)

A solid 12-driver field in the Fernelius Alvarez Attorneys TaG Senior saw a lot of racing for the top spot in each on-track session. Point leader Luke Waller opened up the weekend on top. Waller was the top qualifier on Friday, but was bested by Anthony Honeywell, a TaG Master driver moving into the Senior category for the weekend. Waller came back in the second heat for the win, and lead 14 of the 16 laps of the feature for his second victory of the season. Michael Bartholomew and Derek Proctor moved past Honeywell to steal the podium positions. Saturday was nearly the same, except this time it was Austin Osborne at the point. The Senior rookie was the top qualifier and won the opening heat before Honeywell once again crashed the party to steal another heat race win. Honeywell led the way early in the feature race until Osborne worked his way up from fourth and into the lead. The top two were nose to tail the entire second half of the race, with Osborne edging out Honeywell by 53 thousandths of a second at the line for his first series victory. Waller was a close third with Round Four winner Nick Martin in fourth.

It was another near sweep in the Gaddy Web Design Rotax Senior for Louie Pagano, as the California driver fell short Saturday. Friday was a perfect score, leading every session on the day that was capped off by an eight-second margin of victory over point leader Jesse Woodyard and Conner Ford. Pagano continued to show the way Saturday through qualifying and the two heat races. Trouble early on in the main event dropped him down the order and he eventually retired. That opened the door for Ford to secure his third victory of the season. Thomas Beaudoin was runner-up with Gabe Bargas back to third after leading early on. 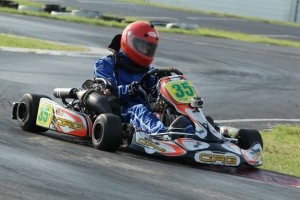 The wins in the SwedeTech Racing Engines S5 Junior Stock Moto division were split by Raul Guzman and SKUSA Pro Tour point leader Trenton Estep. Guzman, leading the series championship standings going into Denton, swept the on-track sessions Friday. The margin of victory was 1.4 seconds over Estep with Hannah Williams earning her first podium of the season. Jacob Loomis led things in the wet qualifying session Saturday, with Guzman back to the point in Heat #1. Estep won the second heat to even the score, setting up a head to head battle in the main event between he and Guzman. The holeshot went to Guzman, but Estep took control on lap seven, going on to earn his first victory of the season. Guzman settled for second with Loomis in third.

The Dallas Karting Complex DD2 Masters class welcome another two-time winner along with a fourth different driver to stand on top of the podium. Lance Lehrman triumphed Friday for his second victory of the season. Mike Wherley set the pace through qualifying and the opening heat race. Lehrman took over the top spot in Heat #2, and edged out Wherley at the checkered flag with Phillip Stoelman in third. Lehrman remained at the front end of the field Saturday, setting the fast lap in qualifying and leading the way in Heat #1. Wherley moved to the point in the second heat, and drove to a four-second advantage in the main event for his first victory of the season. Lehrman was second with Jason Morski matching his best result of the year.

Championship contenders Parker Chase and Luis Alfonso Perez Pena added to their win total in the Enertech Rotax Junior. Chase swept the action on Friday, leading all on-track sessions and securing the main event victory by two seconds over Brett Mitchell and Ryan C. Lewis with Pena in fourth. Chase was quickest on Saturday in the wet qualifying session, but saw Lewis lead the way in both heat races. The main event began with Chase getting the jump and leading early until Pena charged his way forward. Taking over the lead on lap six, Pena led the remainder of the race for his second victory of the year. Lewis was able to work past Chase for the runner-up position. 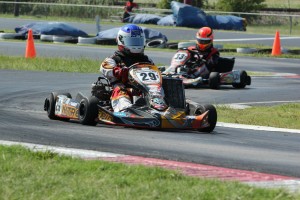 Two wins for Juan David Gomez put him at the top of the TaG Master standings (Photo: Dreams Captured Photography)

Jak Crawford saw his win streak in the Ribtect Micro Max category come to an end during Friday’s round of action. Crawford was the top qualifier and won both heat races. Noel Leon Vasquez finished second in both races, and got the jump over Crawford at the beginning of the main event. Leading all 12 laps, Vasquez edged out Crawford at the line by 61 thousandths of a second for the victory. Crawford returned to the point Saturday in qualifying and Heat #1. Vasquez won the battle in Heat #2, edging out Crawford once again. The two went back and forth in the feature race, with Crawford able to escape in the closing laps to secure his fifth victory of the year with Vasquez settling for second. Branyon Tiner finished third in both main events.

The series will take off the month of September to prepare for the final two rounds of the 2014 season, scheduled for the Gulf Coast Kartway in Katy, Texas on October 3-5. A special thanks to all the companies that support the 2014 program. Visit texasprokartchallenge.com and ‘Like’ them at Facebook for more information on the 2014 Texas ProKart Challenge program.