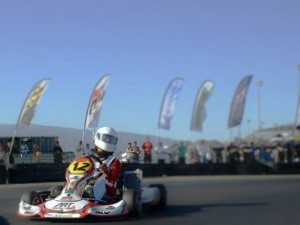 While the national racing scene has been in full swing throughout the summer, local karting series have also been busy with races up and down the California coast. ART Grand Prix America drivers competed in three different series in four different categories, scoring podiums in each one.

Enzo Prevost started the month off competing in Rotax Junior at the Redline Oil Karting Championship. Prevost would capture his fifth podium of the year in as many races. Prevost would start on the front row after winning the second pre-final, only to have an issue at the start that would drop him down the order. Prevost would battle back to a third place finish and will look to close out the season strong to win the championship.

The team would be onto their local championship, the LAKC event, with five drivers competing in the top club series in the state. Matias Podboj would return to the series in S1 and was in the battle for victory before a loose coil ended his main event early. Kalvin Chen was running top 5 in a very competitive S4 category, but would come up just short of the finish. Brad Harvey consistently improved all day in PRD Masters to score another top 10. Chance Skaufel and Aaron Aguirre would be competing in the most competitive class of the series, PRD Junior. Skaufel would collect his fourth podium of the season with a strong third place result and close the gap to the points leader to just five points going into the final two races of the year. Aguirre would be running in the top 5 before being sidelined by a mechanical DNF.

The final event of the month would be the F100 Series at the Apex Karting Center. Three drivers would represent five entries for the team at the growing local championship. Steve Wetterau would take pole in both the 125 Shifter and FK2 categories, making his series debut. Wetterau would struggle to get off the starting line all day in the shifter, but would come across the line 3rd in both heats and the final, setting fast lap in each session. In FK2, Wetterau would finish 2nd in the opening heat in his first ever race in a 100cc class, but opening corner incidents would take him out of both the second heat and the final. Kalvin Chen qualified 2nd in 125 Shifter and took pole in FK3, the 100cc Advanced class. Chen would win the opening heat and then fall back to 2nd in the second heat and the final in the shifter class, crossing the line right behind the winner. Chen would get taken out in the first heat of FK3, but battle back to a 3rd place podium result by the end of the final. Team Manager Kyle Kuntze would also compete in FK3. After timing in 2nd in qualifying, Kuntze would go on to lead every lap of both heats and the final to collect his second straight event sweep in a row.

After a string of successful events, the team will continue preparations for the final two SKUSA Prokart Challenge races and the SKUSA Supernationals. With limited arrive and drive opportunities available for each series make sure to contact artgpamerica@gmail.com or visit www.artgpamerica.com to secure your spot with the team as well as to inquire for dealer opportunities and locating a dealer nearest you. Stay up to date with the team on Facebook at: ART Grand Prix America.