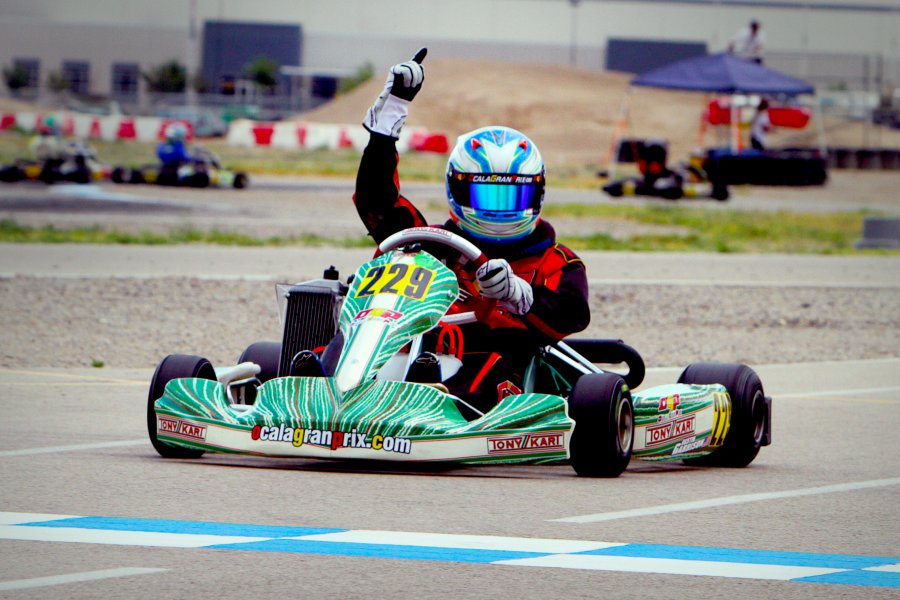 Garrison crossing the line at the Cold Stone US Grand Nationals for the Junior Max victory (Photo: Ken Johnson - Studio52.us) 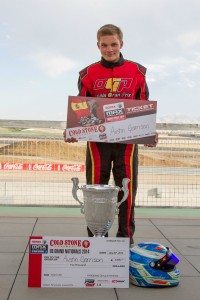 Austin will compete at the Rotax Grand Finals as part of Team USA for the first time (Photo: Ken Johnson – Studio52.us)

You would be hard pressed to find another driver who has had as enjoyable of month this summer than Austin Garrison. The Ocala Gran Prix driver has had a run for the ages as he rolled through July by earning three major karting victories. Garrison’s historic month began by being crowned the Junior Max champion at the US Cold Stone Rotax Grand Nationals. Garrison then traveled to the west coast two weeks later, where he made a major statement by dominating the Superkarts! USA SummerNationals, winning the feature races in the S2 Semi-Pro Stock Moto class.

Garrison’s stellar stretch began with ‘Rotax Week’. As an avid Rotax racer back home in Florida, Garrison headed to Miller Motorsports Park ready to race his way to the Rotax Max Challenge Grand Finals. Upon arriving in Tooele, Utah the competition was insanely close. Through official practice on Thursday, Garrison was no less than a half second off the top time, but was 18th quick in the final session of the day. Garrison and the OGP team found the speed they were searching for by qualifying Friday morning. Two tenths of a second off the top time placed Austin seventh in the second qualifying group, just one spot away from the SuperPole qualifying session. Heat #1 ended Friday action, as Garrison secured a third place finish. In the second heat race of the weekend Saturday morning, Garrison ran third most of the race before advancing up to second late. The third heat race was another solid performance for Garrison as he drove to another third place result, setting him up for a row two starting spot for the Prefinal. Garrison drove well in the Prefinal, fighting off several battles at different times on the track, before ultimately driving to the Prefinal win and the pole position for the Final. Garrison was perfect in the Junior Max final. Utilizing his inside row one starting spot, Garrison – along with second and third place – broke away from the field early. As the other two began to battle, Garrison laid down consistent laps and drove away to a five second win, and his first ever Rotax Grand Nationals title.

After a very short week at home, Garrison was back in the seat, this time trading in his Rotax for a six-speed Stock Moto. The freshly crowned Rotax champion was in Modesto, California for the SKUSA SummerNationals at the inaugural Modesto Grand Prix competing in the wildly-competitive S2 category. Garrison began the weekend by occupying the top-10 most of the night Friday during official practice. Qualifying for Round Three of the Pro Tour Saturday afternoon is where Garrison once again pulled out the necessary speed. Two tenths of a second off the pole place, Garrison was third on the starting grid for the first heat race. After leading for an early portion of the race, Garrison slipped to eighth after contact on lap four. Redeeming himself, Garrison drove to a second place finish in Heat #2, giving him a front row starting spot for the main event. Grabbing the holeshot gave Garrison an easy path to the victory Saturday night, leading an Ocala Gran Prix 1-2-3 finish. Sunday began with Garrison qualifying fourth to line up on the second row for the day’s one and only heat race. After moving up to second early in the heat race, Garrison was able to take over the top spot after race leader Kyle Kirkwood clipped a barrier and fell from the lead. Garrison grabbed the heat race win and the pole position for the Final. Garrison went on to lead each and every lap of the main event, and locked up the a second victory in Modesto.

The wins placed Garrison in the championship hunt for the S2 Pro Tour title. The plan as of now is to attempt the back-to-back weeks of the Superkarts! USA SuperNationals – the Pro Tour finale – on November 19-23 and head over to Valencia, Spain for the 2014 Rotax Grand Finals at the Kartodromo Internacional Lucas Guerrero Chiva on November 25-29 to be part of Team USA for the first time. 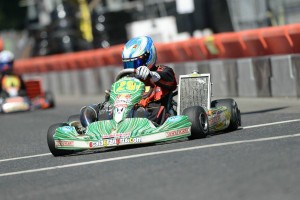 Chassis: Tony Kart
Engine/Engine Builder: Ocala Gran Prix
Sponsors: Ocala Gran Prix
Series You Compete In: Florida Karting Championship Series, Florida Winter Tour, SKUSA Pro Tour, Rok Cup USA
Years Karting: 11
How did you get started in karting? My dad raced when he was young so I kept on seeing all of his trophies around the house and I always wanted one, so when I turned 5 I got a kid kart and raced ever sence.
What has been the high point in your racing career? Winning the U.S Grand Nationals.
What are your goals in racing? To get into some type of race car.
In a few words, how would you describe your driving style? I would put myself on more of the aggressive side haha.
Funniest moment at the race track?  When its somebody’s Birth day and they get pied. 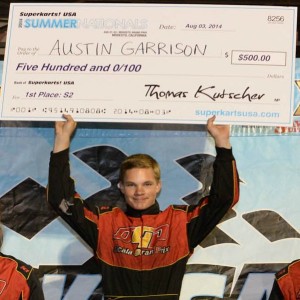 Austin won $500 for scoring the most points at the Modesto Grand Prix (Photo: On Track Promotions – otp.ca)

What do you do when not at the track? Fishing, riding four wheelers and hunting.
What are your goals outside of karting? Being a professional Fisherman
What type of street car do you drive? None
What type of street car would you like to drive? A dodge cummins with a 6 inch lift with extended swing arms lol.
What are your pet peeves or things that irritate you? When people crash me out, when people run there mouth and when people smack there lips when eating. The first two get me angry and the third one irritates me haha.
What do you think could be done to improve the sport of karting? Make it less expensive.
What are your favorite aspects about the sport of karting? Winning