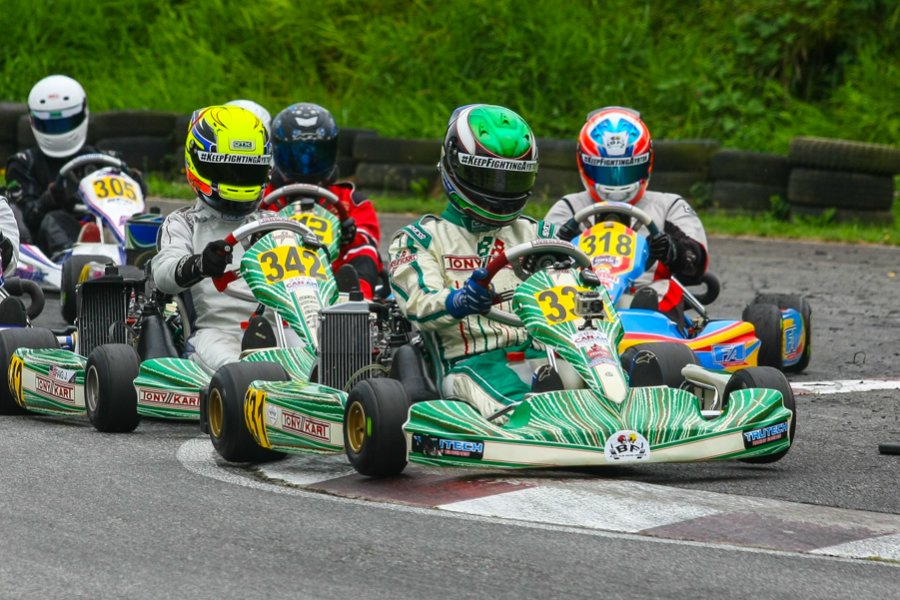 Artie Carpenter swept the final round of the Senior Max category for his first victory at the Can-Am series (Photo: SeanBuur.com)

The 2014 Rotax Can-Am ProKart Challenge came to an end during the third weekend of August, taking racers north of the United States/Canada border for the first time in 2014. The historic Greg Moore Raceway in British Columbia was the site of the August 15-17, hosting the final two rounds of the four-race weekend season. Aside from the class championships on the line in Chilliwack, four 2014 Rotax Max Challenge Grand Finals tickets were decided following the action on Sunday. Jake Craig and Derek Wang defended their titles from last year, John Buzza became a new member to the Team Canada squad, while Austin Versteeg’s ticket in Junior went to Sting Ray Robb. 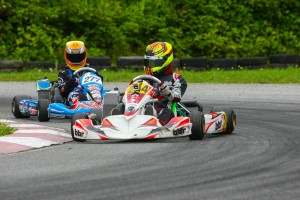 Racing in the Black Flag Racing Senior Max class was top notch in Chilliwack. The one driver who stood out all season however was defending champion Jake Craig. A victory Saturday clinched him the championship and the Rotax Grand Finals ticket. Artie Carpenter was the quick driver early, earning the pole position in qualifying, edging out Marco Eakins and Craig by less than a tenth of a second. Carpenter led all 15 laps of the Prefinal, with championship contender Luke Selliken slotting into the second spot ahead of Craig. At the start of the 20-lap main event, Carpenter was shuffled back to fourth in the order while Craig assumed the point. He led the entire distance for his fourth victory of the season. Carpenter charged back with the fast laps of the race to finish runner-up for his first podium result of the season. Selliken was third with Eakins and Dalton Egger making up the top-five. Carpenter stepped up his game on Sunday, sweeping the day’s on-track sessions. Squeaking out another pole position, this time ahead of Selliken, Carpenter led all 15 laps of the Prefinal. He fought off an early challenge from Eakins to score a near five-second victory, his first at the Can-Am series. Selliken stormed back to finish second with Eakins in third. Kris Hoffbeck and Derek Wang rounded out the top-five for their best results of the season. 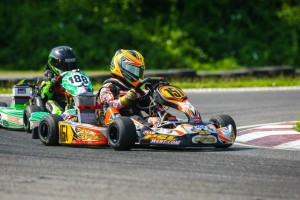 In the Wicked Fabrication Junior Max class, Austin Versteeg and Sting Ray Robb dueled over the final two rounds. Versteeg began the weekend by edging out Robb in qualifying for Round Seven on Saturday. Robb went on to win the Prefinal and held off Versteeg for the main event victory, his first of the season. Kyle Wick completed the podium, coming home third. The roles were reversed at the end of Sunday. Robb started the day off by clocking in with the fastest lap in qualifying over Versteeg. For the second time that weekend, Robb scored the Prefinal win. The main event would belong to Versteeg, capturing his fifth victory of the season to secure the championship. Due to earning a Rotax Grand Finals ticket earlier in the season at the Rotax Challenge of the Americas, Versteeg’s championship ticket was deferred to the second place driver in the championship standings – Sting Ray Robb. Two-time race winner Wick finished Sunday’s main event in the third position, where he would end up in the final point tally. 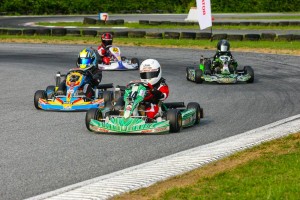 Possibly the biggest championship shakeup in the final weekend, took place in the Monster X Tour Mini Max class. Heading into the final weekend Edward Portz led the championship by three points over Conner Wick, with Austin Torgerson back in third place. Portz lost ground to his competition off the bat to start Round Seven on Saturday. Qualifying saw Portz lay down the fourth fastest lap, while Torgerson and Wick both qualified ahead of him, in second and third, as Marco Kacic secured the pole position. Kacic let the championship racers battle amongst themselves as he drove on to score the Prefinal win. Torgerson hung on to finish second while Portz got around Wick to finish third. The main event saw an end to Kacic’s dominance, as Torgerson made his championship bid known. On lap four, Torgerson took the led from Kacic and checked out, scoring the main event win by half a second. Kacic held off Wick for second with Portz in fourth. Torgenson had obviously found his footing at Greg Moore Raceway, and pushed on. Fast time in qualifying for Round Eight on Sunday went to Torgerson. The Prefinal was the same, as Torgerson beat Portz to the line by half a second. The main event saw Kacic return to the top, after a 15-lap long battle with Torgerson. On the final lap, Torgerson slipped back to the fifth position after contact, leaving Kacic alone to take his first victory of the season. Portz finished second with Wick next to him on the podium in third. Factoring in the drop race, Torgerson was crowned the champion by just nine points over Portz. 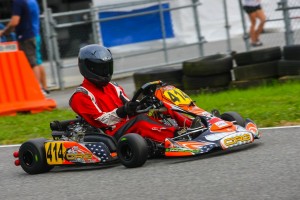 Josh Pierson entered the championship weekend leading the points in the GoKart Hero Micro Max category and left with the title in hand following a sweep in both rounds of racing, scoring the pole position, Prefinal, and Final wins each day. Behind Pierson, the championship podium saw a major change. Max Wright held second place in the points coming into Chilliwack, with Ryan Dezall behind him in third. Due to Wright not making the trip to the last weekend of the year, the door was opened for a new addition to the champion’s podium. While the results do not show it, the field kept the pressure on Pierson throughout the two days, with a number of lead changes taking place throughout the Prefinal and Final events. In the end, Pierson was the only driver to occupy the top spot at the checkered flag all weekend. Following suit, Cooper Becklin was the only driver to finish second in the final two rounds. Thanks to Becklin’s consistency and ability to hold off charges from Dezall on Saturday, and Ashton Torgerson on Sunday, Becklin earned himself a runner-up finish in the final points tally while Dezall would earn third place honors. 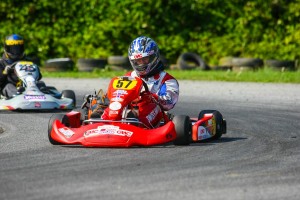 Winnipeg, Manitoba’s John Buzza was the victor in DD2 on Saturday, helping him to earn the class championship and the ticket to Valencia, Spain as part of Team Canada at the Rotax Grand Finals. Having already locked up the DD2 Masters title for a second straight year, including the 2014 Rotax Grand Finals ticket, Derek Wang competed in the MVP LO206 Senior class this past weekend. Wang ran second to David Schorn all day Saturday, until the main event where he emerged as the winner. Schorn came back though on Sunday, and bested Wang, beating him by five seconds for the final win. Bryan Green finished third both days, and was crowned the class champion. Jacob Gulick swept the competition over Kyle Adams in the RLV LO206 Junior class, which handed him the class championship. Andrew Alfonso scored back-to-back main event wins at the final weekend in the Rolison Performance Group Masters Max category, beating John Breidinger and Chad Wallace both days. Wallace, however, would leave Chilliwack having won the war as he secured the Masters Max championship. 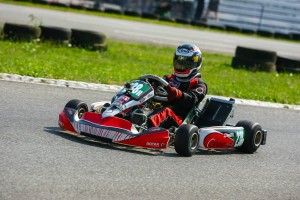 The Superkarts! USA Stock Moto classes offered within the Can-Am ProKart Challenge also finished up their 2014 season at Chilliwack. Evan White was the top dog most of the day on Saturday in the S5 Junior Stock Moto class, before Austin Versteeg took the main event win. Sunday was White’s day as he swept the day over Sara Brinkac. Versteeg left Chilliwack with his second championship of 2014 earning the class title. Kory Estell put in a perfect weekend, sweeping both days of the championship finale weekend in the S2 Semi-Pro Stock Moto category, a performance worthy of the class championship. Double duty racer Marco Eakins ran second to Estell both days. Also scoring a perfect weekend was newly crowned class champion Tyler Shepard, as he dominated in the S4 Master Stock Moto class over Doug Taylor.

The Rotax Can-Am ProKart Challenge would like to congratulate all the 2014 champions and all the competitors for another exciting and fun season. Plans for the 2015 edition of the program are underway. Be sure to keep visiting rotaxcanamprokartchallenge.com and follow the series on Facebook as the 2015 season nears.