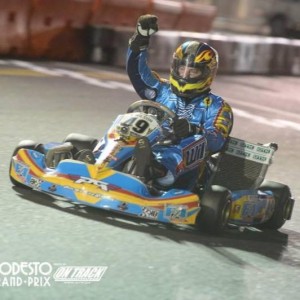 After a successful SKUSA Springnationals, PR Engines powered drivers to three podiums and headed to Modesto with momentum. The SKUSA Summernationals would be historic as it would the first Pro Tour event held on a street course. With a successful history in street racing, PR Engines would be the power of choice for six drivers spread amongst TAG Senior, Junior, and Masters for the weekend. The very fast track would prove difficult and surviving was the key of the event.

Louie Pagano (SodiKart/DKC) and Chris Cricca (ART GP/ART GP America) would lead the charge in TAG Senior. Pagano would compete on an IAME Leopard while Cricca on a Vortex Rok TT. Pagano would open the weekend qualifying 10th in the 31 kart category, while Cricca would time in a very impressive 3rd place. Cricca would lose some ground in the first heat to finish 6th and Pagano, the double podium finisher from Dallas, would move up to 4th. The chaotic nature of the track led for a lot of moving up and down the order and Cricca would line up 5th for the main event and Pagano in 9th. After a number of red flags and major incidents, the main event would be difficult to gain track position and Cricca would finish a disappointing 9th place and Pagano would see his chassis endure a lot of damage after a big crash during the middle of the race. Sunday’s pre-final would see both drivers improve from their qualifying efforts with Cricca finishing 6th and Pagano 8th. The final would be a battle as most of the competition was similar in time at this point in the weekend and passing was nearly impossible. Cricca would do a great job to score his first career Pro Tour top 5 and finish 5th while Pagano would follow gaining valuable points in 6th place. Pagano will enter the SKUSA Supernationals, the season finale, 2nd in the championship and will still have a fighting chance to capture PR Engines its third title in five years in the category, as he has been one of the fastest drivers year in and year out at this event.

TAG Junior would also have a 31 kart field and featured many of the top young drivers from around the country. Sting Ray Robb (Tony Kart/BBR Karting) and Luis Perez (Tony Kart/Falcone GP) would both be competing with PR Engines IAME Leopards. Coming off a podium in Dallas, confidence was high for Sting Ray. The junior rookie would show consistent improvement all weekend in tackling the street course, but could never quite work his way to the sharp end of the grid. Saturday would see him qualify and maintain an 11th place result throughout the day while Sunday he would improve to qualify 7th and finish 6th in the final. Sitting 6th in the points, Sting Ray will look to build on last year’s 13th place result to step onto the podium at this year’s Supernationals. Perez would show great pace all weekend and used the PR Engines power to have his best national event. After qualifying 9th Saturday, Perez would have a crash in the first heat. He would then battle his way from 29th to 9th by the end of the main event. Looking for a more consistent day Sunday, Perez would qualify an impressive 5th place, maintain his position in the pre-final, and finish 7th in the final after battling all race long in the front pack vying for a podium. Look for Perez to continue improving and to be a threat for a strong run at the Supernationals.

Ethan Wilson and Vatche Tatikian would both compete in the TAG Master category on FA Karts with Phil Giebler Racing using their PR Engines Vortex ROK TT’s. Known for his street racing prowess, Wilson would not disappoint as he utterly dominated the 21 kart field on Saturday. After qualifying second, Wilson would win both heat races and then go on to a thrilling victory in the main. After losing ground at the beginning, Wilson would power his way back to the front with a late race pass for the win. Tatikian would have his best national event of his career finishing 4th and even had fast lap honors in the opening heat race. Sunday would be a bit tougher for Wilson as he would qualify down in 4th. He would then go on to set the fastest lap in both the pre-final and the final and come up just short of the weekend sweep finishing 2nd in the final. Tatikian was poised for an even better day Sunday would end with an early crash in the final. Wilson will head to the Supernationals 2nd in the championship and will look to cash in on another victory with the same PR Engines ROK TT package that he crossed the line first with last year.

PR Engines is the defending TAG Senior National Champions and Vice-Champions and will have winning IAME Leopard and Vortex Rok TT packages available for rent for the SKUSA Supernationals this November in Las Vegas. A number of national and regional championship have made PR Engines one of the most respected engine builders in the United States. Specializing in all TAG builds, head engineer Daniel Patino, has been spending the last few months developing a quick X30 package. Anyone interested in purchasing a new and fully blueprinted package are encouraged to act quickly. For more information on PR Engines visit www.pr-engines.com or contact pr-engines@dpowerracing.com. Make sure to follow on Facebook: PR Engines to keep up with all the latest news and updates.