The 2014 Rotax Can-Am Pro Kart Challenge came to a conclusion this past weekend just over the border in Chilliwack, B.C. Canada.  The Can-Am Challenge hosts 8 rounds at four tracks across the Pacific Northwest and Western Canada with the champions of Junior Max, Senior Max, and DD2 being awarded a Rotax World Finals ticket.  Tru Tech Racing Engines Jake Craig looked to close out the series with his second Senior Max championship.

Saturday action would be run under cloudy cool conditions with a threat of rain.  Tru Tech Racing Engines drivers went 1-2-3 in qualifying with Artie Carpenter (Black Flag Racing Products) taking the pole position over Marco Eakins (Black Flag Racing Products) and Jake Craig (2Wild Karting).  Carpenter started from the pole after capturing the heat race victory.  An early race shuffle at the front found Craig come out with the lead pulling a sizable gap on the pack.  After falling back at the start Carpenter worked back up to 2nd to pursue Craig.  With laps winding down Carpenter posted the fastest lap to catch Craig.  The two would run together with Craig cross the strip in 1st.  Eakins would settle for 4th.

With warmer weather on Sunday Carpenter would set the early pace taking the pole position with Eakins qualifying 5th.  Carpenter walked away with the pre-final win with Eakins moving up to 3rd.  The main event provided more excitement with Eakins and Carpenter trading the top spot through the first few circuits.  Carpenter would get the upper hand and begin to stretch out a lead while Eakins began to defend 2nd.  A slip in turn 3 would move Eakins well back to 7th.  With Carpenter leading the way clicking of consecutive fast laps, Eakins worked his way back up from 7th to finish on the podium in 3rd in the 20 lap feature event.

With his win on Saturday, Craig was crowned the 2014 Rotax Can-Am Challenge Senior Rotax champion for the second year in a row.  Craig will take the Can-Am World Finals ticket relinquishing his US Rotax Nationals ticket to Mason Marotta. 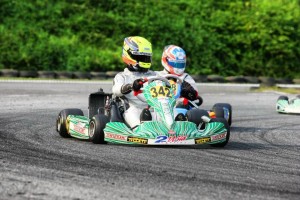 Jake Craig takes another victory on Saturday on his way to locking up the 2014 Rotax Senior Can-Am Challenge championship (Photo: SeanBuur.com)

Under the lights in Texas was the Texas Pro Kart Challenge.  Mini RoK competitor Matthew Stretch reached the podium both Friday and Saturday night placing 3rd both days.  TaG Senior competitor Jason Dempster (IAME Leopard) had a tough go Friday night but rebounded with a 5th on Saturday night.