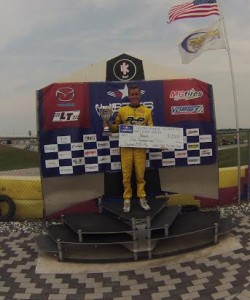 Checkered Motorsports has once again showed their dominance in the United States Pro Kart Series.  The Ohio based team tallied up four podiums, a pole, a victory, and ultimately securing the national title in Leopard Pro.

All eyes were set on AJ Myers going into the final round of the series.  With a mere 50 point lead in Leopard Pro, consistency was a factor.  Myers put his PCR Mxk8 chassis on pole in Saturday’s action.  Unfortunately, a DNF in the first heat race and a victory in the second heat race would grid Myers in 9th.The 18 lap main event consisted of a damp track where utilizing slicks or rains were optional.  The decision to go slicks paid off where Myers would go on to win the main event by over 7 seconds.  Andrew Bujdoso ran as high as seventh, but an on track incident ended his run early settling with a DNF.  Sunday’s action Bujdoso qualified his PCR chassis in the fourth spot while Myers suffered a broken hub in the opening laps and as a result qualified 23rd.  Myers bounced back and advanced the black and yellow colors to a 9th place finish in the main event and securing the Leopard Pro championship.   Bujdoso did not have luck goes his way where an engine issue cost the 16 year old pilot to finish 23rd.

Fielding a total of four pilots in Leopard Junior, Ryan Norberg led the way in Saturday’s action.  After a disappointing qualifying run, Norberg backed up his win from round 5 to finish in the third spot while setting fast lap of the race in the main event.  J.P. Southern Jr. making his first start in the Junior category impressed the team with his pace.  Although contact in the opening laps of the main event had the young pilot fall back to 17th, but worked his way through the field to secure a solid 7th place finish.  Sasha Brun-Wibaux and Nolan Ruocco finished 12th and 13th respectively. Sunday’s action consisted of both wet and dry conditions.  Norberg utilizing his PCR Super Strillo chassis once again led the team to a solid 9th place finish with Ruocco and Wibaux finishing 10th and 11th respectively.  Luck would not go for Southern Jr. where a first lap incident resulted in a DNF.

In Yamaha 100 Junior J.P. Southern Jr. and Nick Luedeke came home with hardware.  The two drivers took advantage of the wet track conditions on Saturday’s main event.  Southern Jr. took no time to get accustomed to his PCR Super Strillo chassis where a last lap pace for the lead would send the driver off course and eventually merge back on the track to finish third.  Luedeke took advantage of the opportunity and crossed the line to finish second.  Unfortunately, Evan Fritts was sent off course on lap 2 and retired with a DNF.  Luedeke and Southern Jr. repeated their performance where both pilots qualified in second and third on Sunday’s action with Fritts not far behind in 9th.  The main event once again had the PCR colors up front with Southern Jr. securing yet another podium finish with a fourth place result.  Fritts battled his way to a solid 10th place finish while Luedeke scored a respectable 9th.

Francois Brun-Wibaux entered in the Parilla 125 challenge came home short from a victory.  The Florida based driver made a move for the lead on the last lap, but would not execute the pass costing him a victory on Sunday’s action.

“It feels great to secure yet another championship title, “explained an ecstatic team owner Csaba Bujdoso.  “The PCR chassis demonstrated speed and consistency throughout the year, and that wins championships.  We are looking forward for the 2015 season and expect better results to come.”