Statistics Don’t Lie, and BBR Karting Has Enough of Them to Go Around 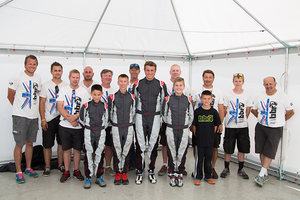 Team BBR has had a successful 2014 to date
(Photo: BBR Karting)

Over the past two months BBR Karting has had an amazing journey traveling through North America competing for various national, and even international championships. The logistics speak for themselves. The team currently has over 9,100 kilometers, 43 days on the road, 28 podiums, 9 wins, and 11 poles throughout the Rotax Summer Shootout, Rotax Can-Am, Western Canadian Championship, and the US Nationals. On top of all that, the team took away a US Rotax Nationals Super Pole, 2 championships and 2 tickets to the Rotax Grand Finals. To say it’s been an impressive season for BBR Karting would be a drastic understatement.

The team would like to highlight within the above listed accomplishments, these individual drivers who each make up a key element in the successful formula this team has sustained this season:

Bryce Choquer has become one of the top drivers in North America in Rotax. He has taken the podium at every event he has participated in this season. Every event Choquer also took home 3rd at the Rotax Summer Shootout. The following weekend he took the win and points lead in the Western Canadian Championship. However, racing is not without its incidents, and Choquer suffered a major rib injury, resulting in mandatory time taken off to heal and to regain his strength through therapy. Choquer made a showing in the final round, and although he was still in pain, this thriving driver managed to finish on the podium and gain enough points to represent Team Canada in Spain. Choquer finished 6th at the 2010 Rotax Grand Finals and has full intention to repeat a top 10 finish in Spain later this year. 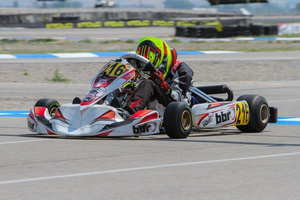 Sting Ray Robb has been at the front of the Rotax Junior field all season long
(Photo: BBR Karting)

“Mr. Apex”moved up from being the #1 Mini max driver in 2013 and has never looked back. Sting Ray Robb has been strong all year and a front runner at every major event. Robb clinched the Super Pole at the 2014 Rotax US Nationals, which was certainly a highlight of the year. However, nothing is more exciting then Robb’s qualifying for Worlds through Can Am after getting a pole, a win, a second place finish, and also extra points for fast lap in both finals. Robb won the ticket by 3 points over his good friend Kyle Wick, who he also had a great battle with all year. This will be his first time competing at Worlds in Junior.

Kellen Ritter had a rough start to 2014. After making the switch after the 1st round of the Challenge of the Americas to BBR, the team began extensive driver training and as hard work tends to result in, Ritter became stronger and stronger. We set goals in place and slowly started crossing them off. First with a top 15 finish, then a top 10, and his first big result was his 5th position finish in the Rotax Can-Am at Pats Acres. He didn’t stop there though, and at the Western Canadian Championship he had a 2nd place and earned his first podium finish at a National event. Kellen has done such an amazing job, and to see him progress from the beginning of the season to where he is now is so impressive and inspiring to the entire team. We put the time in and focused on his weak areas, and his results speak for themselves.

Carson Vogel did not put a wheel wrong at the opening round of the Western Canadian karting Championship. Receiving three poles and three wins gave him a definite lead heading into the final round. Vogel had the opportunity to compete at the Rotax Grand Finals mini Invitation last year and continues to develop as one of Canada’s top mini max drivers. Vogel went on to take the WCC Championship, and now has his sights set on the ASN Canadian Nationals.

There are races in history that you will remember forever and always talk about. Edward Portz had one of the best performances during the final at the 2014 US Nationals. A riveting tale, Portz started 27th and went through the field to finally take 7th place. To top it all off Portz also finished 2nd in the Rotax Can-Am Mini Max Championship. 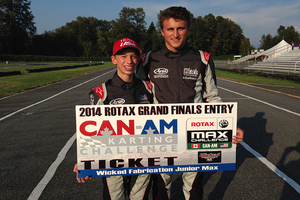 “When I look back I am so happy for our team and all the results they achieved. Out of our seven drivers, all at some point achieved podiums, and some were even for the first time. The team has worked very hard on driver development, and the overall program and the results speak for themselves. You couldn’t ask for a harder working group of talented, focused team drivers. I am so excited to have Sting Ray Robb and Bryce Choquer going to the Rotax Grand Finals this year. It will be Bryce’s fourth time and Sting Ray’s second.

Moving forward we have two major events coming up. These include this week’s ASN Canadian Nationals and the Rotax Pan-Am which have began to prep for and schedule driver training.” Blake Choquer – Driving Coach

BBR Karting is one of the leading karting teams in North America, and focuses on driver development, data and video analysis and has one of the best engine programs. BBR has been in operation since 2001 and have had a total of 11 drivers qualify for the Rotax Grand Finals since we started running Rotax in 2004.

The 2014 Rotax Pan Am Challenge is just over a month away and if you are looking to improve your results and performance, as our drivers have, or wish to win, we have the winning combination of coaching, data analysis, engine tuning and chassis analysis to take you to victory lane. BBR Karting also provides a competitively priced arrive and drive program with one of their BBR/OTK race winning packages, so give us a call and learn how we can help get you the results you want. Phone (604) 783-6474 or by email blakechoquer@mac.com.

One Goal. One Team. BBR.