Round Seven of the Los Angeles Karting Championship in the Books 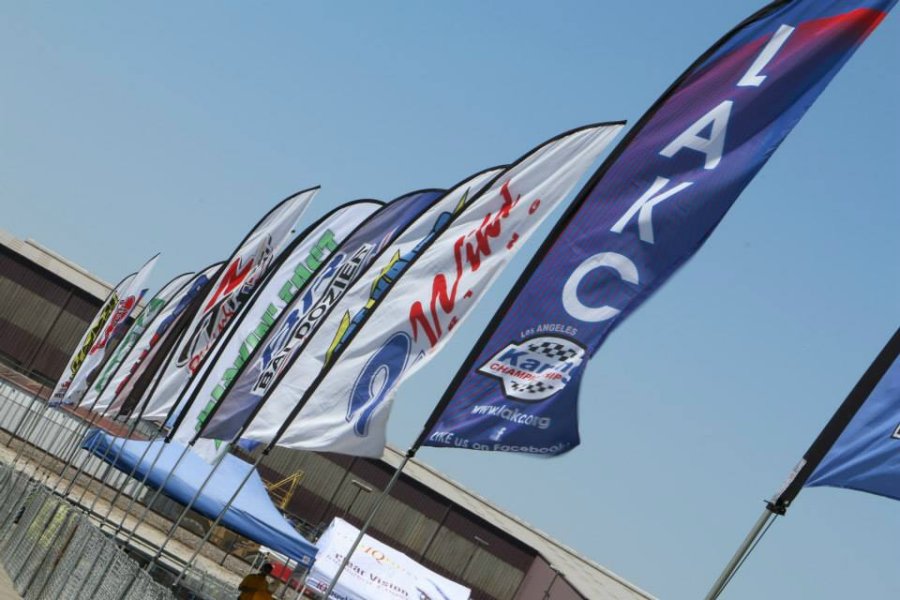 The seventh round of the Los Angeles Karting Championship took place this past weekend (August 17) at the CalSpeed Karting Complex and once again, the paddock was full with talent from California and surrounding states. Set adjacent to the Auto Club Speedway in Fontana, California, the CalSpeed facility is a fantastic venue that offers five unique and challenging configurations. On this weekend, over 160 LAKC racers competed on the 3/4–mile long ‘Grande’ configuration. The normally quick day of racing was stretched out, unfortunately, due to a stoppage in racing after a nasty crash in the Junior 1 Comer Pilot class. Tyler Schlappatha crashed in the Prefinal and was transported to the hospital. Upon examination, Tyler had broken his femur bone and had surgery on it immediately. Doctors expect Tyler to be back and racing in time for next season. Everyone at the LAKC wishes him a speedy recovery.

The racing was epic, as usual, with the championship battles now starting to form. KC Cook did a very good job in stretching out his point lead in the Mike Manning Karting PRD Senior Pilot class at round seven. Cook scored a clean sweep of the day, from grabbing the pole position to narrowly holding off Luis Perez for a six tenths of a second win. Perez ran second all day, while Jacob Pope was a constant in third. With the top three in points running the exact same way in the day’s racing, not too much change is expected in the post-race point standings.

Perfect weekends were also had in three of the five shifter classes offered by the LAKC. Christian Brooks joined the Nash Motorsportz S5 Junior Stock Moto field this past weekend. Brooks began the day impressively by outrunning Anthony Sawyer by eight tenths of a second for the pole in qualifying. Following up with a Prefinal win, Brooks ran to a seven-second victory in the seventh main event of 2014. Class point leader Nicky Hays finished second, while Sawyer completed the podium. Slava Prikhodko continued his winning streak at Round Seven, by sweeping the day in the TM Racing USA Open 125 Shifter class. When the 14-lap main event concluded, Prikhodko had checked out to an astonishing 16-second victory over Kris Valdez and Jesse Romer.

Kolton Griffin collected his sixth win of the season in the 2 Wild Karting S2 Semi-Pro Stock Moto category. Griffin has been dominant throughout 2014, winning all but one race, the April round in which he did not compete. The Arizona shifter pilot kept his theme of domination rolling on Sunday as he swept the round. After beating out Pete Yerkovich by a just over a tenth of a second in qualifying, Griffin was only eight hundredths of a second off S1 polesitter Billy Musgrave’s best time. The Prefinal was another stellar performance by Griffin as he ran away from the S2 field, and hung with S1 point man Musgrave, finishing second overall. The main event began with Griffin coming from the back of the combined grid, giving the early lead to Yerkovich. As Griffin made his way up the leaderboard, he would not have enough laps to claim the lead, with Yerkovich crossing the line first. But a one-position penalty for rolling the start was handed to Yerkovich, awarding Griffin his sixth win of the season. Billy Musgrave swept the day on the way to his sixth win of the season in the 7G S1 Pro Stock Moto class.

The two remaining classes of shifter karts were the S4 and S4 Magnum classes. Willy Musgrave scored the win at the last round in July, and looked to be on the path to do it again this weekend in the Musgrave Racing Company S4 Master Stock Moto class. Musgrave grabbed the pole in qualifying, and then went on to hold off point leader Erik Jackson for the win in the Prefinal. The main event began with Musgrave out front, but it didn’t take long for Jackson to show his hand. By the fourth circuit of the 14-lap feature, Jackson found his way around Musgrave and held the point until the end, motoring to his third victory of the year. Musgrave would have to settle for second, while Cris Araujo completed the podium. John Reikes claimed his first victory of 2014 this past Sunday in the Acceleration Kart Racing S4 Magnum Stock Moto field. It may have been his first win, but Reikes did not just sneak out of anywhere, he earned the Round Seven victory after winning the class pole position in qualifying and running second in the Prefinal. Steve Donia and Jeff Krogstad joined Reikes on the podium.

A different driver stood atop the leaderboard in each session on Sunday in the PureKarting.com Honda Kid Karts class. Cooper Hicks entered the weekend third in points, and impressed by laying down the top time in qualifying. Behind Hicks were Carson Morgan and Dane Idelson. Hicks slid a few spots at the start and had to work his way back to the lead. After taking over the top spot on lap three, he would settle for a third place finish, while Nick Curry advanced forward to take the win. Morgan jumped from the outside of row one into the lead off the green flag in the main event, and never looked back. Morgan grabbed the victory, with Curry in second and Hicks in third.

Racing was great as always in the PRD classes at the LAKC this past weekend. Paul Bonilla made good headway in his championship chase in the Phil Giebler Racing PRD Masters class. Bonilla came to Round Seven trailing Mike Johnson by 24 points, and cut into his lead by winning on Sunday. Johnson got things going by grabbing the pole position in qualifying with Bonilla in second and John Bush in third. In the Prefinal, both Johnson and Bonilla spent time at the front, but neither were the victor. Johnson led early, and Bonilla took over at the halfway point. In the end, it was Bush who grabbed the Prefinal win. The main event began with Bush leading the way for the first two laps. On lap three, Bonilla took control of the top spot and drove away to the victory. Bush hung tough in second place, and finished two seconds behind Bonilla while Johnson completed the podium in third.

Hannah Grisham bested the 17 other drivers who filled the grid on Sunday in the Mack Motorsports PRD Junior 2 class, scoring her first class victory of the season. Grisham started the day second after qualifying behind fast driver Anthony Sawyer. The Prefinal belonged to Sawyer as he led every lap and beat Jake Drew to the line by four seconds. In the main event, Sawyer looked to be running away from the field, and he was, until the last lap. Sawyer led every circuit of the final, until Grisham stole the lead to earn her first victory. Sawyer settled for second with Chance Skaufel in third. 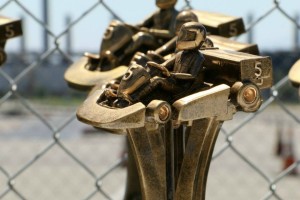 Connor Funk came from a disqualification in qualifying to win in the D Power Racing PRD Senior class. Funk ran to a sixth place finish in the Prefinal, and then went on a tear in the main event, going from seventh to first in 10 laps on his way to the top step of the podium. Paul Bonilla made his second trip to the podium on the day thanks to a second place finish, while pole position winner David Vasquez came home third.

As per usual, the Comer classes raced on track together on Sunday. Empire Karts Junior 1 Comer Pilot class point leader Cole Keith Cotham led the way most of the day. Cotham grabbed the pole position in qualifying, and went on to win the Prefinal. The main event rolled off the grid without Cotham, however, opening the door for Dominic Gorden to move in to the top spot. Gorden led the entire race and scored the win. Alexander Diakouopoulos had his best result of the season, as the ninth place driver in points ran second all day while Kasey Gillis finished third. Fleming Racing Engines Junior 1 Comer Round One winner Ryan Schartau claimed his second victory of the season this past Sunday. Jagger Jones began the day by qualifying on top, with brother Jace behind in second. Jagger stayed at the point in the Prefinal, while Myles Farhan moved in to second place with Schartau up to third. Jagger fell from down the leaderboard after the first lap, which promoted Schartau to the lead. Jace Jones ran second, and finished there. The real story of the final was Dakota Tate driving from eighth to finish third on Sunday.

The TaG categories on display at the LAKC saw three different winners. Erik Jackson doubled up with wins by standing atop the podium in S4, as well as in the PSL SoCal.com TaG Masters class. Jackson would have to contend with a field full of talented racers on Sunday. Tony Rossetti beat out John Molinare for the pole position. Rossetti maintained the podium and crossed the line first in the Prefinal, but would be disqualified in tech inspection for not having a catch can. Vatche Tatikian was awarded the Prefinal win. Tatikian led all but the one lap in the main event that mattered. Jackson battled with Michael Middleton in the late stages but pulled away to challenge and take the lead and the victory from Tatikian on the final circuit. Tatikian settled for second with Rossetti holding third.

Alejandro Fernandez has only run two races in the Buddy Rice Karting TaG Senior class at this point in 2014, and won both of them. Fernandez won Round Three back in April, and added a second victory this past Sunday.  Fernandez was forced to come from the back of the field after being disqualified in qualifying for missing a weight fastener. Fernandez made quick work of the Prefinal, going from last to second in just 10 laps. The main event was all Fernandez as he led wire-to-wire to score his second win of the year. Ty Matta and point leader Eric Molinatti rounded out the podium.

Myles Farhan swept the day in the RPM TaG Cadet class, extending his slim point lead over Jagger Jones. Jagger made sure to keep things tight though, as he finished second to Farhan on Sunday, while Dante Yu came home third.

The championship chase in the LAKC Team Series is getting closer and closer coming to the end of the season. Fourth place team BR Baldozier Racing had a very successful weekend as Erik Jackson scored two wins on Sunday, as did Connor Funk. The leading team of Pure Karting also had a great day in Round Seven, as Kolton Griffin scored the team a win in S2, while Jagger Jones and Pete Yerkovich tallied a pair of second place finishes.

The LAKC still has two exciting rounds of racing remaining in the 2014 season, with Round Eight set to take place on September 21. For more information on the Los Angeles Karting Championship visit them at lakc.org, and like them on Facebook.