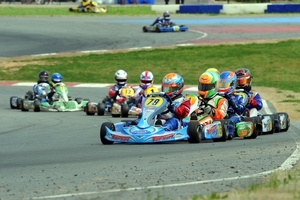 After winning the Florida Winter Tour Formula Kart TaG Junior championship in the six-race mid-winter tour throughout the Sunshine State earlier this year, Malukas rode his HMD Trucking-backed Top Kart USA No. 79 to a fine USPKS campaign in the Leopard and Yamaha Junior categories.

Malukas scored three main-event wins in Leopard Junior on his way to the championship by a hefty margin over Braden Eves.

David won the season opener back in April at GoPro Motorplex in North Carolina and rode mostly consistent finishes in heat and feature race action in the series’ mid-season rounds at Michiana Raceway Park and Pittsburgh Int’l Race Complex.

The 12-year-old racer struggled a bit in the fourth round of the WKA Manufacturers Cup Series a couple weeks ago at New Castle’s Ironman Course, netting finishes of only fourth and eighth in the Parilla Junior class. But there was no sign of struggle at USPKS’s final 2014 stop at New Castle’s traditional “National” course as Malukas rode to dominating wins over a pair of 17-kart fields in the Leopard Junior mains.

“We wanted to end the USPKS season strong after kind of a tough weekend in the WKA race (at New Castle) last weekend,” David said. “I knew the championship was on the line and we had a great shot at it. We’ve never paid much attention to points but it’s been a really good season for us in USPKS and we’re so happy to win the championship. This has become one of the most competitive series so to win the points in this series is a big accomplishment.”

In Yamaha Junior, David also won three main events but his Top Kart USA teammate Zach Holden was just a bit more consistent, capturing two wins and a slew of top-five runs to edge Malukas by 55 points in the final standings.
“I’m happy that Zach and I both won championships. We’ve had a really good year on the Top Karts and it’s awesome that we both won USPKS championships in the junior classes,” David added.

Malukas wins SKUSA Streets of Modesto
West of the Mississippi, Malukas earned a couple of his biggest career wins the first weekend of August at the SKUSA Summer Nationals at the Streets of Modesto in California.

Sunday’s 14-lap main event was another dominating performance by the Chicago driver. Malukas started on the pole after qualifying first and backing it up with a win in the heat race. David never looked back in the final, racing his Top Kart out to a six-second lead by the time the checkered waved. The win marked his first in SKUSA-sanctioned competition.

“We like running out west in the SKUSA Pro Tour and to win at Modesto was a big accomplishment. The Top Kart ran great all weekend with our Comet power. I have to thank my dad, Wes Phillips, HMD Trucking, Top Kart USA and everyone who helps make this racing possible,” David said.