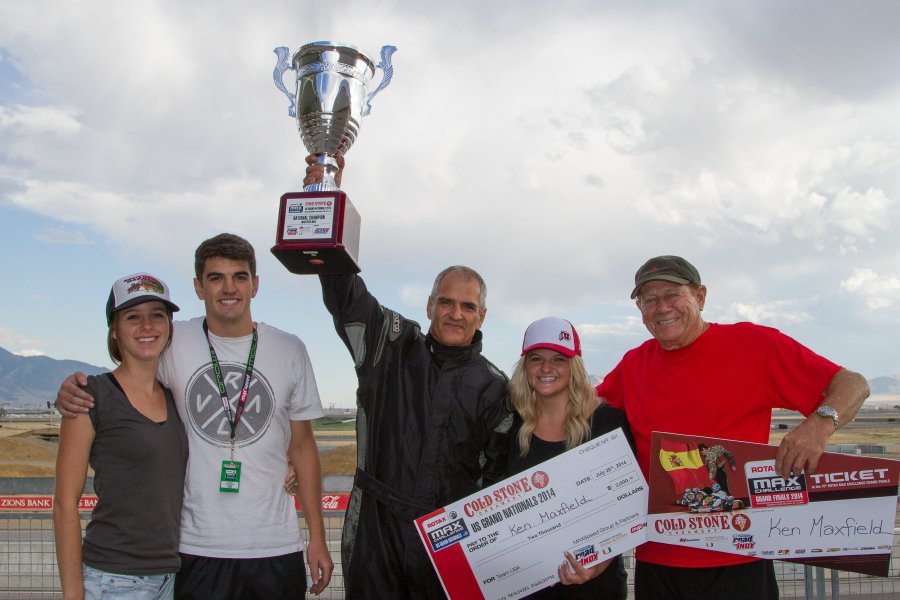 Earning a national championship is not something that you can earn overnight. It is done with hard work, determination, and developing the skills needed to compete at the front of the field in any category. In all seven categories at the 2014 Cold Stone US Grand Nationals at the Miller Motorsports Park in Tooele, Utah, each champion went the extra mile, and found themselves crossing the line first at the checkered flag. Adding his name the list of impressive talents to earn a United States Rotax title was Ken Maxfield. In the Masters Max division, Maxfield was a constant threat and could always be found in the top-five, and completed a very impressive weekend to earn his first Grand Nationals Championship.

The Utah region is a unique one in the karting landscape. The ‘Beehive State’ features easily one of the nations most impressive motorsports facilities, with a karting track that is top-notch. The region may not showcase the highest population of karters, but it is home to some of the best. The Miller circuit host its second US Grand Nationals in four years, and has been part of the United States Rotax Max Challenge program since its beginnings in 2006.

As a hometown racer, Maxfield was primed for the US Cold Stone Rotax Grand Nationals this past July. Just eight months before the event however, it looked like reaching the event would not occur. In November 2013, Maxfield was hospitalized for pancreatitis. Ken spent eight weeks on a feeding tube, and lost much of his physical strength. Fighting back to be ready for the Rotax Challenge of the Americas in January, Maxfield continued his training up to the summer months. The local driver showed speed, and proved to be a threat in the preparatory race for the Grand Nationals – the Rotax Summer Shootout – hosted by MMP in late June. In the warm-up race, Maxfield was on the ball all weekend. From qualifying third Saturday to his second place finish in that day’s main event, followed by another trip to the podium in third on Sunday, Maxfield tapped in to his home track knowledge.

Interview with Ken Maxfield Saturday Evening of US Grand Nationals 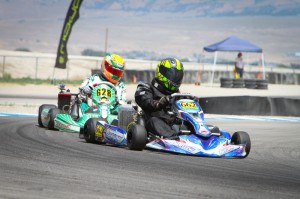 Maxfield held off Scott Roberts to claim the title at the Cold Stone US Grand Nationals (Photo: Ken Johnson – Studio52.us)

Maxfield carried the speed that took him to the podium each day of racing at the Summer Shootout on to the Grand Nationals. Ken took to the track along with 30 of his fellow Masters Max competitors for qualifying where he posted the second fastest lap of the session, only five thousandths of a second back of the top time. The first of three heat races completed the Friday action, which saw Maxfield chase the leader down on lap eight, complete the pass for the lead in the hairpin, and hold off a last lap challenge for the win. Saturday featured the final two and three of the weekends heat races. Ken drove to a fourth place finish in heat two, and a second place in the final heat race after a back and forth battle for the lead.

His efforts during the heat races kept him on the front row, starting outside of now two-time Team USA driver Scott Falcone. After dropping back to fourth, Maxfield fought his way into the second position but began falling back. By the end of the 14-lap event, he ended up ninth. The door opened wide for Maxfield on the opening lap of the main event. Three of the lead drivers were three wide through one of the corners, and contact was made. Maxfield found himself leading as they made their way across the line for the first time. He and Scott Roberts were able to get away from the chaos and hold a sizable lead on the rest of the field. Roberts took a turn at the point, but Maxfield was much stronger out front. Roberts continuously tried to find away around Ken, but the Arrow driver was not to be denied his chance at the national championship. At the end of the 20-lap final Maxfield drove to a half second victory, and was crowned the Masters Max champion.

The next step in Maxfield’s 2014 season is preparing for the Rotax Grand Finals at the Kartodromo Internacional Lucas Guerrero Chiva in Valencia, Spain on November 25-29. It will be the first time Ken will be part of the Team USA outfit, and also the first time he will compete in a DD2 Masters ride. 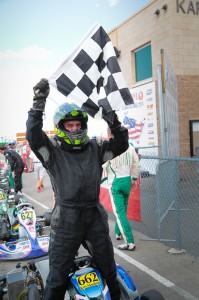 Chassis: Arrow
Engine Service Center: MSquared
Sponsors: My Family
United States Rotax Max Challenge Home Series: Utah Miller Motorsports Park
Years Karting: 10
How did you get started in karting? Attended the Jim Hall kart racing school in California
What has been the high point in your racing career? Winning the Cold Stone US Grand Nationals Masters Max class in 2014
What are your goals in racing?  Karting, I don’t have any desire to move to any other form of racing.  Karting keeps me young and motivated to stay in shape both physically and mentally.  My current goals are to prepare for the Rotax Grand Finals in Spain this November.  I will be racing a DD2 (which I have never raced before) so I need to practice and learn a new style of racing.
In a few words, how would you describe your driving style? Be patient and wait for the opportunities to come.
2014 Accomplishments: Podium in Tucson at Rotax Challenge of the Americas in January, the first race back after being in the hospital for 10 days with pancreatitis, and on a feeding tube for 8 weeks in November and December. Several podiums in Challenge of the Americas and the Rotax Shootout.  Rotax National Champion in Masters Max.

What do you do when not at the track?  Work, Church, Family, I am a private plane pilot
What are your goals outside of karting?  Spending time with my family
What type of street car do you drive? BMW M5
What type of street car would you like to drive? BMW M5
What are your pet peeves or things that irritate you? Selfish people and inefficiency in any form.
What is your favorite aspect about racing in the Rotax Max Challenge program?  The three “C’s” –Consistency, Competition, Comradery