Huston Grabs the Spotlight at Rotax Round in Hawke’s Bay 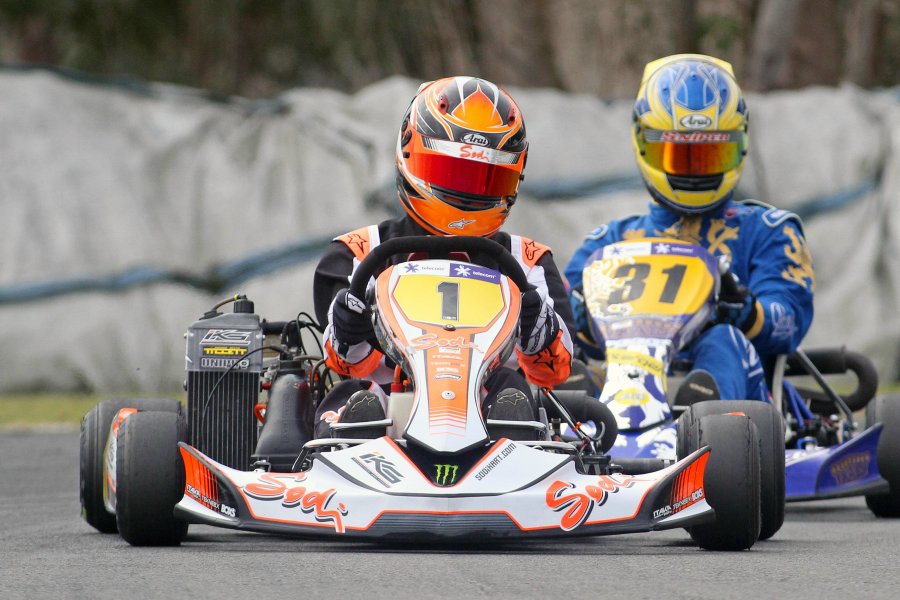 It all came right for Caleb Huston at the fifth round of this year’s Rotax Max Challenge New Zealand in the Hawke’s Bay over the weekend, the 14-year-old from Rotorua successfully making a last lap, last corner pass on title contenders Marcus Armstrong and Dylan Drysdale to win the Arai Junior Max class Final.

“It’s definitely a weekend I’ll remember for a long time,” young gun Huston said of a round where he started well – qualifying third quickest behind Dylan Drysdale and Michael McCulloch  – then finished fourth in the first heat and third in the second and Pre-Final before scoring his breakthrough win in the Final. 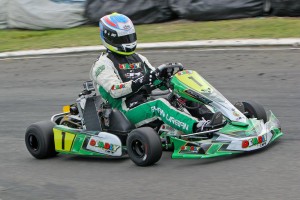 Defending class champion Marcus Armstrong from Christchurch quickly worked his way forward after qualifying fourth, but was not as dominant in the cold, crisp conditions that greeted the Rotax Max category karters at KartSport Hawke’s Bay’s Chemz Raceway on the outskirts of Hastings on Saturday and Sunday as he has been at previous rounds.

He and Palmerston North teen Drysdale shared heat race wins but Drysdale beat him to the line in the Pre-Final with Drysdale leading early on and at the end but Armstrong in front through the middle section of the race.

Armstrong then led the lion’s share of laps in the Final, only to be dragged back into a battle for the lead by Drysdale on the last lap, then find himself helpless to do anything about it when a fast-finishing Huston passed both he and Drysdale as the pair tussled for what they thought was going to be the win within sight of the chequered flag.

While it was by no means the end of the world for either Armstrong or Drysdale as far as series points are concerned it was a big deal for Huston, marking the youngster as someone else to watch out for at the final round of this year’s Challenge series in Auckland next month.

Also impressing in the Arai Junior Max field, albeit a little further back, was Maddy Stewart, the young Wellington female showing the benefit of racing in the Australian Rotax series this year with top six finishes in the heats and Pre-Final, and a ninth place finish in the Final.

The Hastings’ ace was in top form on his home track, pipping Urban to the post in qualifying before winning both heats and the Pre-Final.

Urban was never too far behind, until the Pre-Final – when he was punted off the track at the first corner and forced to fight his way back into contention after the field had flashed past.

On his way back to a hard-won fifth place Urban set a new class lap record, then – obviously fired up – made the Final his, taking over from early leader Zaloum on the seventh lap and going on to win from Zaloum,  former UK Rotax series class winner and representative Tiffany Chittenden, Zaloum’s KartSport Hawke’s Bay clubmate Shaun Reay, and Aucklander Aarron Cunningham.

In the premier Logitech 125cc Rotax Max Light class, meanwhile, it was a case of ‘the Kinsman brothers’ road show’ rolling on, despite the best efforts of Palmerston North driver Fraser Hart.

Qualifying showed pole man Hart’s single-lap pace was every bit as good as that of the Kinsmans but in the races eventual Final winner Mathew and younger brother Daniel had an edge. 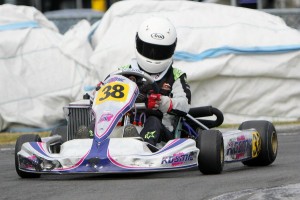 Defending class title holder – and reigning NZ class Sprint champion Mathew – won the first heat from Daniel, Cambridge driver Andy Schofield and Hart, but Daniel made a pass on Mathew on the last lap to win the second.

Heading into the Hawke’s Bay round Andy Schofield was still a top two threat to the Kinsman brothers but now the pair have a buffer ahead of next month’s Auckland series’ final with long-time sparring partner Daniel Connor in third ahead of Schofield, Mason Armstrong and Hamilton’s Rhys Tinney.

The weekend’s series round was the fifth of six making up this year’s 2014 Rotax Max New Zealand Challenge supported by Schwarzkopf Professional with KartSport Auckland hosting the Final at its Strata Networks Raceway at Rosebank Domain over the September 20-21 weekend.