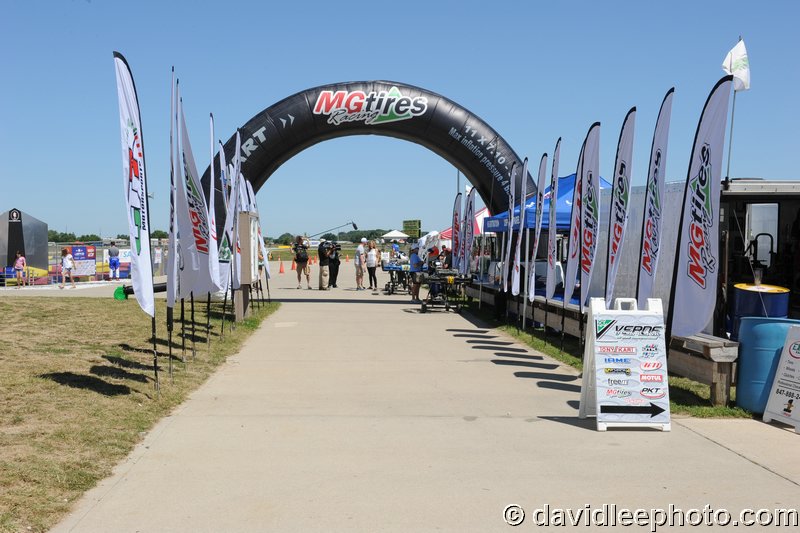 EKN’s Paddock Insider brings you notes, updates and breaking news as it happens. The article will be a timeline of events as they happen during the United States Pro Kart Series finale weekend at the New Castle Motorsports Park in New Castle, Indiana. The information will not be seen anywhere else, including notes, interviews and photos. For complete coverage of the USPKC, visit the EKN Event Page. Please feel free to comment and discuss our coverage and today’s action in the EKN Global Members Discussion area below:

Century Mark Reached Every Weekend
The numbers have hit record highs throughout the 2014 season for the United States Pro Kart Series. The season opened up with 171 per day at the opener held at GoPro Motorplex. Like every series, the numbers steadily went down, but not by much. South Bend had 158 with Pittsburgh hosting 149. This weekend in New Castle, the total is at 135 per day. 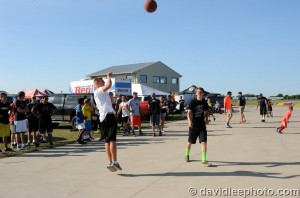 Drivers and crews of the USPKS take on the 3-on-3 basketball tournament (Photo: DavidLeePhoto.com)

USPKS Red Plate
Throughout the 2014 season, the United States Pro Kart Series has given the current point leaders in all categories the option to run a red background on their front fairing. It has seem to act as a target on the drivers, whether bad luck strikes or just tough racing with a number of drivers taking a turn at the top of the standings. This weekend, those carrying the red panels are gunning to retain them to Sunday evening, which will give them a USPKS title.

#KeepFightingAyrton
During the August 1-3 weekend, Virginia driver Ayrton Climo was injured during a practice incident at the Eastern Canadian Karting Championship event held at the Le Monaco de Trois-Rivieres facility in Quebec. The 18-year old schedule to attend James Madison University in the fall suffered head trama, and was placed into a coma at a nearby Quebec hospital. Over the last few weeks, doctors have been steadily working to bring him out of the coma without any complications. His parents are by his side in Quebec, and a possible transfer back into the United States may be scheduled in the near future. A #KeepFightingAyrton drive has begun, including stickers and helmet visors thanks to DB Motorsports’ Brian McHattie. A GoFundMe account has been created to help cover any costs the family may have, regarding travel, medical and post-hospital bills that may arise. EKN will have stickers and visor stripes at Rock Island Grand Prix for those who want to show their support for Ayrton Climo and his family. 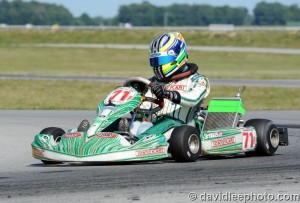 2nd annual USPKS 3-on-3 Basketball Tournament
Friday evening, the USPKS series hosted the second annual 3-on-3 basketball tournament following the on-track practice and alongside the Friday Feast. Sixteen teams entered, and the competition was fierce, just like on the race track with no one giving an inch. The bracket came down to the PCR team and the eKartingNews.com squad. PCR, with AJ Myers, Dakota Pesek, and Nolan Ruocco edged out the elder team of Rick Fulks, Kevin Nelson and David Cole. Congrats to everyone and it appears a third tournament will be back in 2015.

Fast Friday
The tradition continued for the 2014 finale weekend, with the top driver in the Friday Happy Hour session awarded a full pizza by the USPKS. Florida driver Dustin Stross (Tony Kart) posted the quickest lap of the timed session in his final circuit, laying down a 1:05.533-lap to edge out Pittsburgh double winner Mike Giessen (Deadly). Trevor DeLong, aboard a chassis designed by his father Bill, posted the fast lap in the final session on Friday. Using the draft by the point leader Brandon Jarsocrak (Haase), DeLong laid down a 1:12.526. Leopard Junior point leader Zach Holden (Top Kart) was fastest, as was his Top Kart USA teammate and championship leader David Malukas in Yamaha Junior. Merlin driver Alex Bertagnoli and Austin Schaff split the Mini Rok Cadet and Yamaha Cadet division, each earning a pizza for Merlin Nation. Cristian Volmir (Kosmic) and Luca Mars (Praga) set the tone in Parilla Challenge and Yamaha Rookie.