TaG championships coming down to the wire this weekend in Indiana

eKartingNews.com is proud to partner with the USPKS once again, offering live audio coverage. EKN Trackside Live will provide play-by-play and live timing for those unable to attend by bookmarking eKartingNews.com/live and listen in to USPKS announcer Randy Kugler. Included with the EKN Trackside Live coverage will be articles and reports throughout the weekend. A detailed look at the fields that will compete in all eight divisions is set for the upcoming two days. The first preview article yesterday looked at the four Yamaha divisions, with the TaG preview below. 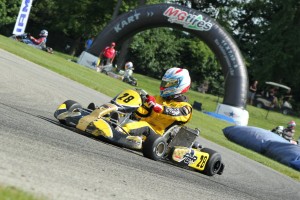 Leopard Pro
Last year, inaugural Leopard Pro champion Kyle Kalish secured the championship one day early with a victory. This year, the Franklin Motorsports/Merlin pilot is up against the wall trying to defend the crown. The season has not been the best in terms of luck this year for the young Illinois driver. En route to victory in Mooresville, a loose airbox cost him a chance at the win as he drove one-handed. South Bend was a battle with qualifying, trying to fight his way through the field back into the top-five. While Pittsburgh aggravated the fractured ribs suffered in early May, forcing a substitute driver on Sunday to salvage points. Thankfully, Kalish appears to be nearly healed, testing out the ribs at a recent on-track session in Dousman, WI.

Aside from the championship contenders, a number of drivers will be hunting for the $1,000 to win the main event each day, along with the $500 bonus for winning both, presented by DRT Racing. That bonus was $1,000, with New York driver Mike Giessen scoring a cool $3k in his 2014 USPKS debut at Pittsburgh. Aboard a Mike Doty Racing Deadly Kart, Giessen was dominant in the dry and the wet. The same combination will be in New Castle this weekend, gunning for more cash.

A handful of drivers will be making their first USPKS start of the season in New Castle, looking to stop Giessen and the rest of the drivers. Former EKN TaG Driver Rankings #1 driver Daniel Formal will get behind the wheel of an Arrow chassis this weekend. In a joint venture between DRT Racing and KartSport North America, Formal will make his first USPKS start. Another former #1 driver – Phil DeLaO – is making the trek from Arizona. Joining the Top Kart USA squad once again, DeLaO will return to the USPKS after the inaugural event at GoPro Motorplex last year. One of the most recognizable names in the United States karting will be doubled, with Jim Russell Jr. of Russell Karting Specialties and his son James racing together in the Pro division. Russell is coming off a nine month absence from the kart seat, showing well at the Modesto Grand Prix in the TaG Master category.

Andrick Zeen is set for a return to the USPKS after winning the TaG Senior race at the Modesto Grand Prix. The new Praga North America driver showed speed at South Bend, but was caught up in a number of wrecks not by his own doing. ‘Cowboy’ Cal Stewart is set to make his first official start in the series this season, after subbing for an injured Colton Ramsey in Pittsburgh. Stewart will be in the familiar Top Kart USA outfit on the weekend, looking to ‘steer’ his way onto the podium this weekend.

Jumping over from the Yamaha Pro category are Shawn Sharkey and California driver Andrew Wiener. Sharkey (Merlin) was the sub driver for Kalish in Pittsburgh, having not been in a TaG kart for nearly two years. After the heat race, Sharkey was thrown into the deep end, racing in the rain for the main event and was able to move up into the sixth spot. Wiener made the long trip to race the South Bend round, only to have a number of misfortunes mechanically throughout the weekend. Now the ART GP driver moves over to the familiar TaG machine for New Castle.

The race for the final steps of the championship podium include a host of drivers. Dustin Stross (Tony Kart), Jacob Donald (Arrow), Derek Dignan (FA Kart), TJ Koyen (ART GP), Roger Ralston Jr. (FA Kart) and Elliott Finlayson (Tony Kart) are all vying for the third through fifth, and a piece of the large championship prize package awarded Sunday evening. 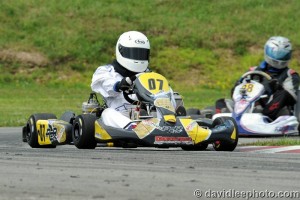 Parilla Challenge
Just two drivers are entered in what will be the final race of the Parilla Challenge at the USPKS program. For 2015, the class will be eliminated, and these two drivers have a chance to become the first and final champion. Francois Brun-Wibaux (PCR) holds a 15 lead over Cristian Vomir (Kosmic). Francois used his first two wins ever during the Pittsburgh round to propel him into the championship lead while Vomir has yet to win a feature race this season. 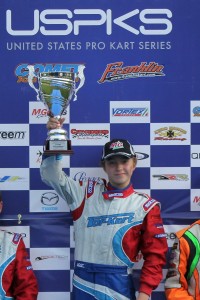 David Malukas is the target in Leopard Junior on the finale weekend (Photo: EKN)

Leopard Junior
The chase in the inaugural Leopard Junior category is far from over. The category has seen five different winners in six rounds of racing, with David Malukas holding on to the top spot in the standings. The Round One winner has led the point standings from day one, and enters the weekend with a 210-point advantage. With the large amount of points still left on the table, and how competitive the season has been, it could be gone after one day of racing. The Top Kart USA driver is carrying strong momentum however, scoring double wins at the Modesto Grand Prix two weeks ago. It was a solid rebound from a challenging weekend at Pittsburgh for the last USPKS event.

Leading the chase toward Malukas in the standings are two drivers who have momentum of their own. Ryan Norberg moved into the second spot in the standings after a great Round Five performance and was set to challenge in Round Six until an engine issue in the rain put the Checkered Motorsports/PCR driver on the sidelines early. Round Six was a great display of wet track racecraft by Zach Holden. The Top Kart USA pilot drove away with the victory, and welcomes the series to his home track, needing a perfect weekend to eclipse the point totals of Malukas and Norberg.

Braden Eves (FA Kart) has steadily worked his way into contention each of the last two weekends, sitting fifth in the standings behind Round Two winner Anthony Gangi Jr. (Tony Kart), who has had up and downs all season. Neil Verhagen (Arrow) has been impressive during his rookie Junior campaign, and is on the verge of challenging for a top-five on the championship podium. Mike McAndrews (Birel) is the only double winner in the category, sweeping the main events at his home track in South Bend. A wild card will be the advancement of John Paul Southern into the Junior category after competing in the Cadet divisions all year. The PCR driver will get his first taste of Junior racing this weekend at New Castle. 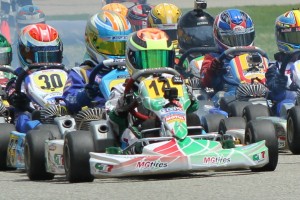 Mini Rok Cadet
Dylan Tavella is regarded as one of the top Cadet drivers in the country this season. Leading the Yamaha Cadet championship, the New Yorker also holds the lead in the Mini Rok Cadet category. Despite a rough weekend in South Bend, the Tony Kart driver holds a 289-point advantage going into the weekend, riding on two wins, a runner-up and third place result. Leading the charge to dethrone Tavella is Merlin driver Alex Bertagnoli. The Round Three winner suffered his worst weekend of the season in Pittsburgh, and is looking to bounce back in New Castle.

The newest winner to the list of USPKS victors is Alex Verhagen. The FA Kart driver scored a dramatic win in Round Six, and sits strong in the third spot in the standings. Devin Boutot (Tony Kart) and Sam Mayer (Merlin) sit fourth and fifth in the point chase, with a trio of drivers looking to move up onto the championship podium. Benik drivers Lance Fenderson and Round Four winner Lachlan DeFrancesco have been fast, along with Austin Schaff (Merlin). The final few spots on the podium for Sunday evenings year-end ceremony is sure to be decided in the final few laps.