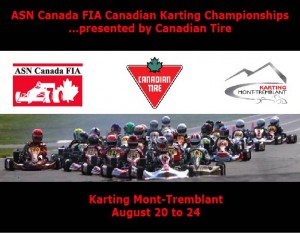 Canadian Tire has renewed its support as the title sponsor of the Canadian Tire ASN Canada FIA Canadian Karting Championships being held on August 22 – 24, 2014, at Circuit Mont-Tremblant, Québec. Canadian Tire will also continue to sponsor Team Canada for the 2014 Rotax Max Challenge Grand Finals 2014 in Valencia, Spain, on November 25 – 29, 2014.

“We are proud to be part of Canadian Tire’s motorsport heritage,” said Paul Cooke, Vice President, ASN Canada FIA.  “Canadian Tire’s support for the development of our youthful driving talent is fantastic and makes a huge difference in helping bring our drivers to the world motorsport stage. The kart racing facility at Mont-Tremblant, Québec is one of the best in North America and a challenging track for our 200 competitors from across Canada to showcase their emerging talent.”

“We are so excited to have the Canadian Tire ASN Canada FIA Canadian Karting Championships event here in Mont-Tremblant,” said Ben Cooper, Canadian and European Champion Kart racing champion and resident of Mont-Tremblant. “We know that young drivers from across Canada are anticipating competing in this event. Canadian Tire is a big part of our community and many teams from across Canada rely on their local store for their supplies. Thank you to Canadian Tire for being a major part of kart racing’s top Canadian event.”