The sophomore season of the United States Pro Kart Series is set to finish this weekend at the New Castle Motorsports Park, presented by KARTSALE. Labeled as one of the top facilities in the United States for karting, the record-breaking year the USPKS championships will close out at the New Castle, Indiana facility. Each of the four TaG categories and four Yamaha divisions will crown the 2014 title winners, and the celebration – with support from MG Tires, Vortex Engines, L&T Clutches and Mazda – will be held following the final day of action on the August 15-17 weekend.

A total of $3,000 thanks to the USPKS and DRT Racing left in the hands of Franklin Motorsports Leopard Pro driver Michael Giessen at the Pittsburgh International Race Complex following his double feature win weekend. Another $2,500 will be offered again during the New Castle weekend, with $1,000 for each feature win and $500 to any driver to secure the victory is both races. That will be the last thing on the minds of the championship contenders, with two drivers entering the weekend separated by 50 points. Round Four winner AJ Myers assumed the point lead after the Pittsburgh event, jumping ahead of defending champion Kyle Kalish, who suffered a rib injury during the Sunday round of action. Yamaha Pro driver Shawn Sharkey subbed for the young champ, helping to salvage points and put Kalish just 50 points out of first entering the New Castle weekend. Florida driver Dustin Stross sits third with last year’s vice-champion Jacob Donald in fourth and Derek Dignan in fifth – each with one top-three finish on the season. 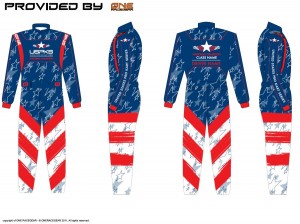 Brandon Jarsocrak has been the driver to beat in Comet Racing Engines Yamaha Pro since leaving the GoPro Motorplex as the point leader. The Pennsylvania driver has scored the most points at each of the three USPKS events, earning the $1,000 purse at all three weekends. Two-time race winner Dakota Pesek is the closest challenger, back by 380 points with Derek Dignan 10 markers behind him.

Three different drivers have stood atop the championship standings in the J3 Competition Parilla Challenge, each scoring a double-win weekend to do so. The latest is Florida driver Francois Brun-Wibaux who won each feature race in Pittsburgh, and leads the championship by a slim 15 points. Cristian Vomir has five top-three finishes over the six rounds of racing to sit second while South Bend double-winner Laurentiu Mardan falls to third, 75 points out of first. Each and every session on-track will affect the final outcome in the championship chase.

David Malukas suffered a difficult weekend in Pittsburgh during the GT7 Motorsports Leopard Junior events. Quick early on, he would not finish either main event to see his championship lead shrink. The advantage however remains 210 points, giving two drivers a glimmer of hope to take over the top spot. Round Five winner Ryan Norberg put himself closer in the championship chase with his victory, and will need more success in New Castle for a chance at the crown. Zach Holden welcomes the series to his home track, down by 250 points but having won the last battle in the rain. Holden has the advantage in the Woltjer Racing Engines Yamaha Junior category. Two wins and two runner-up finishes has him out front in the standings. Malukas is second, sporting three wins of his own in the six races. Round Four winner Brandon Lemke still has a shot, but will need to his best performance over the weekend to close the gap on the top two.

Two drivers are at a near lock at the top of the QPS Employment Group Yamaha Cadet division. Dylan Tavella has a 30 point advantage over defending champion Sam Mayer. Tavella has two wins and a runner-up finish, while Mayer has one win and two runner-up finishes. Each and every session for the two during the New Castle weekend could mean the championship or coming up short. Tavella also leads in the Orlando Kart Center Mini Rok Cadet standings. A double winner in Mooresville, Tavella jumped back to the top after two more top-three finishes in Pittsburgh. South Bend winner Alex Bertagnoli trails by 289 points, needing a perfect weekend to close the gap. Luca Mars is bringing in a five race win streak, and a comfortable lead in the Switch Racing Engines Yamaha Rookie championship chase. Tyler Maxson is the only other driver to win in 2014, and trails by 395 points. 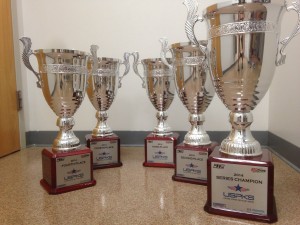 All season, each winner in the Leopard Pro category has received a certificate toward a raffle drawing at the season-end banquet. Praga Karts and IAME are providing a trip to the IAME International Final, set for the Karting International Du Mans in France on October 15-19, 2014. The winner will receive free support with the Praga factory team as well as use of a Praga chassis, IAME X30 engine, tires, tent space, entry and fuel at no charge. If the winner is not able to attend the event, another name will be drawn. MG Tires is also awarding another international trip, with the lucky recipient going to the 2014 Granja Viana 500 event outside Brazil. The driver selected must be of legal age to attend.

Once again, KartLift and the USPKS will be giving away a Pit Kart, valued at $1250.00. A number of gas grills will be given out during the banquet, courtesy of Marx Fireplaces & Lighting. The Rock Island Grand Prix is also offering all USPKS Champions (Leopard Pro, Parilla Challenge, Leopard Junior, Yamaha Pro) a free entry into the 2014 Rock Island Grand Prix, scheduled for Labor Day weekend in the Quad City area.

The weekend schedule on Sunday for the USPKS finale will change to allow time for the year-end banquet held in the evening. The two heat races will be combined into a 10-lap Prefinal and go into the 15-lap main events, 18 laps scheduled for the two Pro categories. In addition to the Friday Feast provided by USPKS and the New Castle Motorsports Park, the second annual 3-on-3 basketball tournament will take place after practice Friday evening. MG Tires, PKT Certificates, L&T Clutches and other giveaways will be handed out to registered racers during both events.

The United States Pro Kart Series is offering any Route 66 Sprint Series racer who has never competed at the USPKS a special incentive to compete in New Castle. The USPKS will give a $100 certificate toward any sponsoring kart shop or engine builder for entering this weekend.