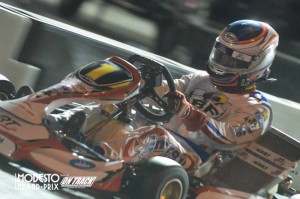 For the first time in SKUSA Pro Tour history, a national championship event would take place on a street circuit. Racing in the downtown area of Modesto, California, a record number of entries would take to the streets looking for SKUSA Summernationals glory in front of the thousands of fans lining the streets to watch the competition. After a disappointing season opener in Dallas, five drivers would enter the race aboard their ART Grand Prix chassis. The high speed and narrow confines of the circuit would make the weekend just as much about avoiding an incident as having the outright quickest pace. With the race days beginning in the afternoon and then ending at night under the lights as well as temperatures in the triple digits, battling the different variables would be an incredible challenge all weekend for the drivers and teams.

Two drivers would compete in TAG Junior on the weekend as Nor-Cal natives Phillippe Denes and Carter Herrera would battle the 31 kart field. Saturday’s qualifying would find Denes 7th and Herrera a solid 17th in his first ever SKUSA event. After losing positions in the opening heat, Denes and Herrera would move forward to 7th and 13th respectively in the second heat to set their starting positions in the final. Dropping as low as 8th early, Denes would run some of the fastest laps of the race making his way back forward in the late night final. With the nature of the circuit making it very difficult to pass, Denes would settle for a 6th place finish and the 3rd quickest lap. Herrera would make his way into the top 10 when a late race incident ended his fantastic opening race three laps short. Both drivers returned Sunday with similar qualifying efforts. With only one heat race on the second day to try and condense the schedule, Denes would improve from 8th to 6th and Herrera from 17th to 12th. Denes would be locked in a race-long battle for the podium positions and would eventually finish 5th. With the pace to finish up to 2nd, Denes used a conservative approach to make sure he saw the checkered flag instead of risking any major incidents. Herrera would battle a bad engine issue and salvage a 14th place result in his pro tour debut.

Marco Eakins would compete in the largest category of the weekend, S2, with 43 entries. A rough qualifying session would see the Oregon shifter rookie advance from 35th to 27th in the opening heat. Eakins would continue to improve in the second heat up to 21st. The main event would continue to be a battle and while not having the pace he wanted, Eakins would fight until the end to salvage a 20th place result even after losing a large amount of time on the opening lap. Sunday would prove almost mirror results until the final where Eakins was locked in a tough battle to finish 26th. While disappointed with the results, Eakins continued to learn and improve and will look to take that knowledge into the final round of the Can-Am Karting Challenge where he will be looking to win the S2 championship.

Chris Cricca and Andrew Zimmer would battle in the professional TAG Senior class. With last year’s Streets of Lancaster winner and the reigning TAG Senior national champion in Cricca and Zimmer respectively, expectations were high for the duo. Cricca would get things started off right with a great 3rd place qualifying effort in Saturday’s qualifying and Zimmer timing in 9th. A wild start in the opening heat would see a number of drivers taken out and Cricca dropped down the order. He would come across the line 7th, while Zimmer would put in a great drive to finish 5th, only to be disqualified after a broken EGT sensor left a tiny hole in the exhaust header during the race. Starting from the outside, Cricca would lose positions early in the second heat to climb back up to 6th place. Zimmer would climb from last to 20th. The main event would be mired by a huge crash on the opening lap. With drivers restarting at nearly 2 A.M. survival was the name of the game. Cricca would struggle to make ground up and while running some of the fastest laps, would fall back to 9th. Zimmer would continue to move back forward and finish 11th.  The next day would start strong again as Zimmer would qualify 4th, and was the quickest Leopard on a track that clearly favored the X-30, and Cricca 6th. Cricca would hold station in the heat, while Zimmer would get bounced back early and finish 11th. The final would be marred by another big accident that would cut down the laps.  Finally with the outright pace to contend for the victory, Cricca didn’t have the time to climb through the field and would finish 5th in what was the Californians first Pro Tour top 5. Zimmer would run very strong lap times, but lost a lot of track position early and would cross the line 11th.

“Street racing is always a battle of attrition and staying clean. This weekend was definitely one of the toughest in that respect I have ever seen. We had the pace in both TAG Senior and Junior, but it just wasn’t meant to be this weekend. I am super proud and thankful of the effort made by all the ART Grand Prix drivers and we showcased once again on the national scene how strong the product is. We will look to push and finish the year strong with the end of the SKUSA Prokart Challenge, USPKS, Can-Am Karting Challenge, LAKC, and then the granddaddy of them all the SKUSA Supernationals!” expressed ART Grand Prix America Team Manager Kyle Kuntze after the event.

ART Grand Prix America is the official race team and exclusive importer for the ART Grand Prix product line for the United States. With national and regional championships in 2013 and top results around the country so far in 2014, the team and chassis has been proven to be amongst the best. With the season beginning to wind down, the end of the year is the perfect time to begin testing and making plans for next year. For special testing rates, arrive-and-drive opportunities with the team for any race the rest of the season, dealer opportunities, or information regarding a dealer near you, visit www.artgpamerica.com or contact artgpamerica@gmail.com.