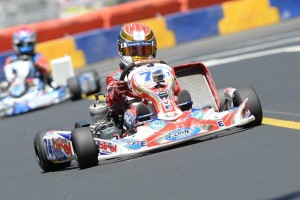 Recently celebrating his 13th birthday, rising young karting star Nick Brueckner is not allowed to drive down city streets in a motorized vehicle. This past weekend, the Texan – along with nearly 250 other drivers – were able to break the speed limits set by the City of Modesto for the 2014 Superkarts! USA SummerNationals. The northern California city welcomed racers from all over the world to take part in the inaugural Modesto Grand Prix through the downtown city streets. Brueckner, making only his second weekend start in the competitive TaG Junior category, carried over his debut podium finish to earn two more, positioning himself as a contender for the Pro Tour championship.

The event was the largest in regards to entry numbers in the five-year history of the SKUSA Pro Tour. Adding to the fact that it was the first-ever street race to count toward the series championship, anticipation and tensions were high. Brueckner remained cool, calm and collected, keeping his MRP Motorsport/Birel America entry clean through the entire weekend. Avoiding mistakes made by others and minimizing his own, the weekend was a success. The schedule and heat also tested the drivers competing as each day featured night racing, with Saturday’s main events taking place just before midnight.

Nick had a slight issue during the Round Three qualifying session on Saturday, and found himself in the 12th position for the opening heat race grid. Picking off one kart per lap, Brueckner was up to the fifth position by the end of the first heat race, earning the fast lap in the process. Nick gained another two spots in Heat #2, setting the fast time once again, placing third and just a few kart lengths from the leader. After dropping back to fourth on the opening lap, with the outside line of the opening corner a difficult position to start from, Brueckner charged back quickly. Nick was into the second spot after lap two, and began matching lap times with the leader. Unable to make up any ground, Brueckner finished the race in the second spot for his best Superkarts! USA Pro Tour TaG Junior result this season. 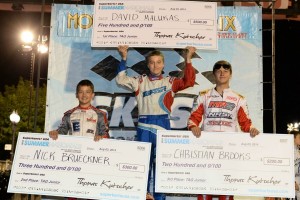 Thanks to both his podium results, Brueckner took home a $300 check for earning the second-most points on the weekend (Photo: On Track Promotions – otp.ca)

The following day began with the same two drivers at the top of the order in qualifying, as Brueckner posted the second quickest lap of the eight minute session, just sixty-four thousandths off the fast time. The 12-lap heat race was cut short to 10 after a false start, with Nick finishing in the second position. He put his MRP Motorsport/Birel America machine into the lead early, but feel back to second. Brueckner posted the fast lap of the race on the final circuit, coming up just short of the race win. Nick held the second position for much of the 14-lap main event until an engine misfire on lap 13 slowed his pace. It dropped him back to fourth, but an aggressive final circuit helped to move him back into third, and on the podium for a third straight Pro Tour feature race.

The upcoming schedule will be much more relaxed for Brueckner as he will settle in back home to get ready for the next school year at the Rosehill Christian School, following what was a busy first seven months of the racing. Nick will be preparing for the Pan American Challenge in October at the GoPro Motorplex in Mooresville, North Carolina to contend for the one ticket up for grabs to compete in the 2014 Rotax Grand Finals, set for Spain in November. The Pro Tour championship will conclude in November at the historic SKUSA SuperNationals XVIII in Las Vegas.

About Nicholas Brueckner:
Racing out of Hockley, Texas, Nicholas Brueckner is a name you will be hearing more throughout the karting ranks in the coming years. At 13 years of age, Nick has spent less than four years in the sport, and has racked up impressive results and experience. From winning the Micro Max class at the 2012 U.S Rotax Grand Nationals and Mini Max championship in the 2013 Florida Winter Tour, to racking up wins at home in the SKUSA Texas ProKart Challenge, Brueckner is climbing the ladder quickly. Nick’s talents are far from being limited to just behind the wheel, however, as he is excelling academically, earning straight-As along with showing great leadership and people skills. Supporting Nick in his racing endeavors is the MRP Motorsport/Birel America team, Jose Castro/CMW Engines, Oakley Sunglasses, Savage Design, Rosehill Christian School, and Trackside Tutoring.