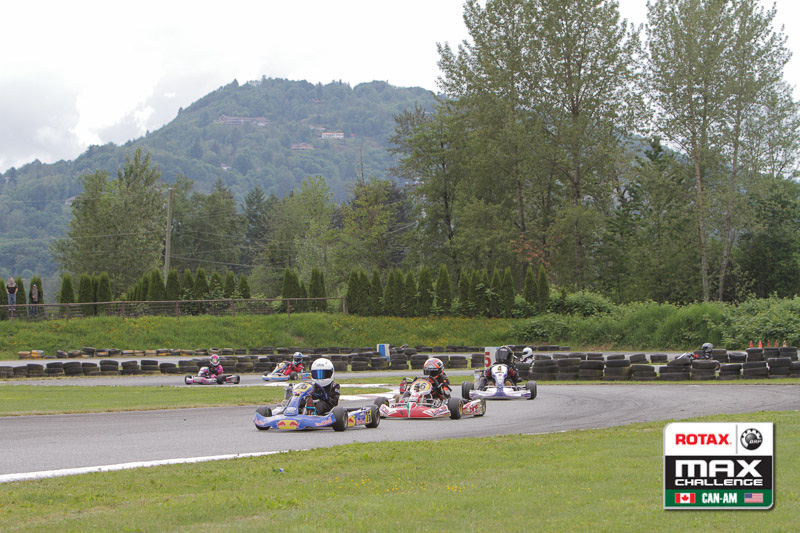 The 2014 season is drawing to an end for racers at the Rotax Can-Am ProKart Challenge, as the series heads to the finale weekend at the Greg Moore Raceway. The Chilliwack, British Columbia facility will welcome the Rotax Max Challenge / Superkarts! USA regional program on August 15-17, hosting the fourth weekend of the championship series. Many top level racers from the western half of the United States and Canada have taken part in the series’ first two seasons, enjoying tough competition amongst one another while enjoying each weekend at the race track with the series providing a number of off-track activities.

This year’s Can-Am championship is a best seven of eight for the Rotax Max Challenge categories, along with the new LO206 Senior and Junior divisions, while the Superkarts! USA Stock Moto classes will complete a five of six championship series in Chilliwack. The weekend will crown the series champions, and also award four drivers a ticket to the 2014 Rotax Grand Finals at new Kartodromo Internacional Lucas Guerrero Chiva in Valencia, Spain on November 25-29.

Three drivers remain in the hunt for the Black Flag Racing Senior Max championship chase. 2013 Senior Max champion Jake Craig was recently crowned the United States Rotax national champion following his victory at the 2014 Cold Stone US Grand Nationals. He has three victories this season at the Can-Am program, as does last year’s Junior Max series champion Luke Selliken. Craig has been more consistent, along with Canadian Bryce Choquer. The two are separated by 41 points, with Selliken sitting third before counting in the drop round. If Craig was to secure his second straight title, he would forfeit the ticket he won at the Rotax Grand Nationals in July.

Austin Versteeg has won four of the six races in the Wicked Fabrication Junior Max category, and holds the championship lead. Earning a Rotax Challenge of the Americas title this winter, Versteeg already has locked up a 2014 Rotax Grand Finals ticket. That won’t disturb his hunger to clinch the series championship. Chasing him is two-time race winner Kyle Wick and the consistent Sting Ray Robb. Both are looking to perform at their best next weekend, with a possible chance of earning the Can-Am Rotax Grand Finals ticket.

The Monster X Tour Mini Max division has seen four different winners in six races. Edward Portz is one double winner, and leads by just a slim margin over Conner Wick. His advantage is just five points over Round Three winner Wick. Round Five victor Austin Torgerson moved himself up to third in the standings with Canadian Marco Kacic and two-time winner Jacob Blue Hudson still in the hunt.

Josh Pierson is coming off a runner-up finish at the Cold Stone US Grand Nationals, and travels to Chilliwack for a chance at the GoKart Hero Micro Max championship. Pierson has won five of the six main events, entering the finale with a 112 point advantage over Max Wright with Ryan Dezall in third. John Buzza is just one weekend away from securing the DD2 title, and the Rotax Grand Finals ticket. Set to make his second straight trip to the Rotax Grand Finals is provisional DD2 Masters champion Derek Wang. Five consecutive wins in the first six rounds put him in full control over the standings, not needing to compete at the finale next weekend. This will be the second straight year Wang will race as part of Team USA.

Kory Estell is looking to lock up the title in the S2 Semi-Pro Stock Moto division. Marco Eakins has kept the pressure on the entire season after winning Round One. Estell has been solid in the last three main events, and the two will settle the score up in Canada. Ben Johnston has a perfect score going in the S4 Master Stock Moto category with four straight wins after sweeping each of the four rounds. Randy Word has kept Johnston honest throughout the year, and will attempt to end the streak. The inaugural season of 4-Cycle racing as part of the Can-Am program could see some larger numbers with the series going across the border. Bryan Green and Jacob Gulick have been the consistent contenders throughout the year, and hold on to the MVP LO206 Senior and RLV LO206 Junior championship leads. The LO206 is a growing program in Canada, and numbers could be at its highest next weekend.

All information regarding entry to the Greg Moore Raceway event can be found at the online registration page, with Rotax competitors having until August 10 at 11:59pm PDT to receive the discounted price (SKUSA and LO206 racers have no pre-entry deadline). Hotel and other event specifics are listed on the Can-Am Event Page. Visit rotaxcanamprokartchallenge.com and be sure to follow the series on Facebook as the 2014 Rotax Can-Am ProKart Challenge continues.