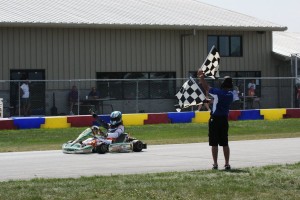 Over the last few years Route 66 has turned into one of the most competitive regional series in the Midwest. With that being said, Innovative Performance has been attacking that series vigorously to turn some heads. Innovative Performance is a fairly new company that was established in 2011that sells Tony Karts / Parts, provides 2-Cycle engines, and will help with other random kart tasks.

TaG Jr. has been one of the new and upcoming classes on the east coast. The series has recently added the class into their schedule but it already hosts some of the best national drivers in the country. Dillon Schwanbeck never competed or drove a TaG Jr. kart prior to this year and has made tremendous improvement throughout the year under the Innovative Performance tent. Dillon was able to qualify within the top 5 both days with an impressive second on Saturday and fifth on Sunday. During the races he had some great battles with the other competitors and ended up coming away with a pair of sixth place finishes. 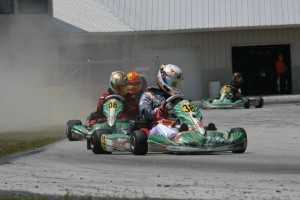 Yamaha Sr. has gained a great amount of popularity throughout the last few years. The racing is always excellent and the class offers drivers the opportunity to race even if they are on a low budget. Yamaha Sr. was able to get close to 20 entries both days. Danny Corcoran competed both days, while owner Scott Kopp only competed Sunday. Danny came into this weekend fresh off a win at the last even at Badger Kart Club. Circumstances were a little different this time around having never been to the track prior to Friday practice, while Badger was his home track. Without any fear, Danny attacked NCMP on Friday with everything he had. Taking advantage of the knowledge Innovative Performance has at NCMP, he made tremendous strides throughout the day and was feeling good rolling into Saturday. Danny was able to muster a sixth place in qualifying. After some adjustment to the kart and engine Danny was off to the prefinal. After the first lap he fell back to seventh but was able to make his way back to sixth. Starting the final sixth place he found himself in an awesome race. He shuffled all the way back to ninth but made some awesome passes which put him into fourth on the last lap. Heading into the last corner he battled with some other karts and was able to come out with a fifth place finish putting him on the podium! Rolling into Sunday Danny and Scott were out looking to acquire some more good results. Danny posted the fastest time in practice which was extremely exciting. With the momentum on his side he was able to keep his pace going into qualifying and got the Innovative Performance Fast time award by getting the pole! Without any practice Scott qualified 16th. He knew what changes needed to be made to move forward. Starting 1st Danny took the jump but ended up getting together with another driver ending his race early which put him in 16th. While that was disappointing, Scott put on a show and moved all the way up to sixth! The final rolled around and Danny was able to move up ninth by the end of the race. Owner Scott Kopp was impressive once again in the final. He moved up to 2nd by lap 10. Heading into the last corner he found himself in a battle with two other drivers. He ended up coming out in 3rd which solidified his great comeback from qualifying. 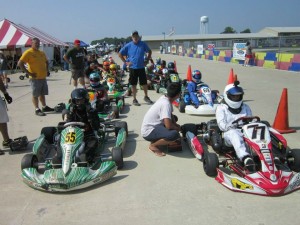 Danny Corcoran on the pole position with Innovative Performance Engines

TaG Sr. which is considered to be one of the most competitive classes in the entire United States lived up to its standard. After the last practice on Saturday Josh Hotz and Tommy Andersen were looking pretty good placing inside the Top 10. Both making some minor adjustments before qualifying Josh and Tommy were ready to go. Josh Hotz and Tommy Andersen both threw down some impressive laps placing them in 3rd and 2nd. With impressive qualifying results, both drivers had pretty high expectations going into the prefinal. After the 2nd corner Tommy Andersen found himself in the lead and unfortunately Josh Hotz got involved in a wreck putting him at the tail end of the field. Tommy would lead some of the prefinal but eventually fall to 2nd place by the end of the race. Going into the final Josh Hotz was looking to move up and Tommy Andersen was looking to take the lead again. After the second corner Tommy took the lead but had contact in turn 3 causing him to fall back to 8th place. After putting his head down and passing at every opportunity he was able to work his way all the way to 3rd place. Josh Hotz started the first lap back in 19th position and after lap two he was in 16th. He ended up finishing 15th. After further examination of Josh’s kart, it was found that he raced the final with a bent kart. With room to improve, the Innovative Performance team worked hard Saturday night. Sunday morning rolled around and practice was under way. Josh ended up 14th quickest in practice and Tommy ended up 3rd. With minor adjustments made for qualifying Josh and Tommy were determined to be up front. Josh ended up qualifying 7th and Tommy ended up 6th. Not the results they were looking for but being inside the top 10 isn’t something to complain about. Going into the prefinal both drivers were trying to break into the top 5. Josh remained in the same place, 7th, and Tommy was able to move up to 4th. Both in positions to finish within the top 5, the drivers went to work. After the first lap of the final Tommy found himself in the lead about 1.5 seconds ahead of second place while Josh remained in 7th place. Josh kept moving forward and ended up securing the 5th spot placing him on the podium. Tommy never looked back and was able to win the race by 2.1 seconds!

If you are interested in purchasing an Innovative Performance Tony Kart, Two cycle engine, or an arrive and drive package, please contact us at Scott@innovativeperf.com or give us a call at (262)-408-8407.

Innovative Performance will be attending USPKS at NCMP.