Top Kart drivers at the front in TaG, Yamaha and Rok classes throughout the weekend 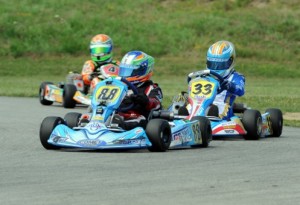 With a short trip to the Pittsburgh International Race Complex (PittRace) in Wampum, Pennsylvania, Top Kart USA would enter a handful of drivers in the fifth and sixth rounds of the United States Pro Kart Series (USPKS). With already a stout resume with their 2014 results, the Indianapolis based team would add more victories and podiums as they enter into the second half of the 2014 karting season.

“Though our results speak for themselves, we had a win that was taken away in post tech,” explained Bill McLaughlin. “Due to the fact that it was a non-performance enhancing item, the USPKS reversed the decision and awarded us the victory that we deserved as well as reinstated all the competitors that were deemed illegal with the same issue. This is a great call by USPKS as they look to make sure their customers remain happy.”

Competing in the Yamaha Pro division, Dakota Pesek continued his string of podium results as he was once again at the front of the field. Taking the main event victory on Saturday, the talented competitor proved it was no fluke by returning Sunday to cross the line in second. Killian Keaveny would also add a pair of top-ten results with seventh and sixth place finishes.

Top Kart USA would enter three drivers in the Yamaha Junior division and come home with a pair of victories. On Saturday, Zach Holden would stand atop the blocks while David Malukas found his way to the front of the field on Sunday after a disappointing DNF in Saturday’s competition. Holden would also add a sixth place result Sunday while Sheldon Mills would narrowly miss the top-ten with an 11th place result.

Pauly Massimino and Giovanni Bromante would enter the Vortex Mini Rok class and have mixed results. Massimino would back up his 11th place run on Saturday with a seventh place finish Sunday, while Bromante would finish 12th and 11th respectively. Bromante would also see action behind the wheel of his Yamaha powered Top Kart and after finishing in the fourth position, was removed from the results for a non-performance enhancing rear bumper rule.

Owen Mahle would be the lone entry in the Yamaha Rookie class and would stand on the podium on Saturday. Coming home with a third place finish, Mahle was hoping to improve two more positions on Sunday but would fail to complete the full race distance. 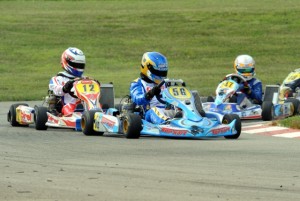 In the ever-competitive TaG Junior field, controversy would rule the day on Sunday after multiple top-ten finishes on Saturday. Holden and Malukas would finish ninth and tenth respectively to complete the first official event day however on Sunday, several Top Kart drivers would be in the top-five. With Malukas out early, Holden stole the show as weather moved into the area and secured a dominant victory in wet and tricky conditions. However, post-race the top-five drivers would be excluded from the results for not having an over flow bottle on their radiator. Though non-performance enhancing, the rule is in the book and was initially enforced. With outrage from competitors, families and teams, the United States Pro Kart Series reversed the technical disqualifications on Wednesday, July 30th, reinstating Holden as the winner and adding to Top Kart USA’s weekend total.

Top Kart USA will now shift their focus to the upcoming USPKS and World Karting Association (WKA) events at New Castle Motorsports Park over the August 8-10 and August 15-17 weekends.

Further information on Top Kart USA and McLaughlin Motorsports can be obtained by contacting their offices at 317.870.3122 or visiting them online at www.TopKartUSA.net. The top Kart USA online store is now live and ready for orders. Visit Shop.TopKartUSA.net to place your orders today.