Respecting the Streets…and the Sport 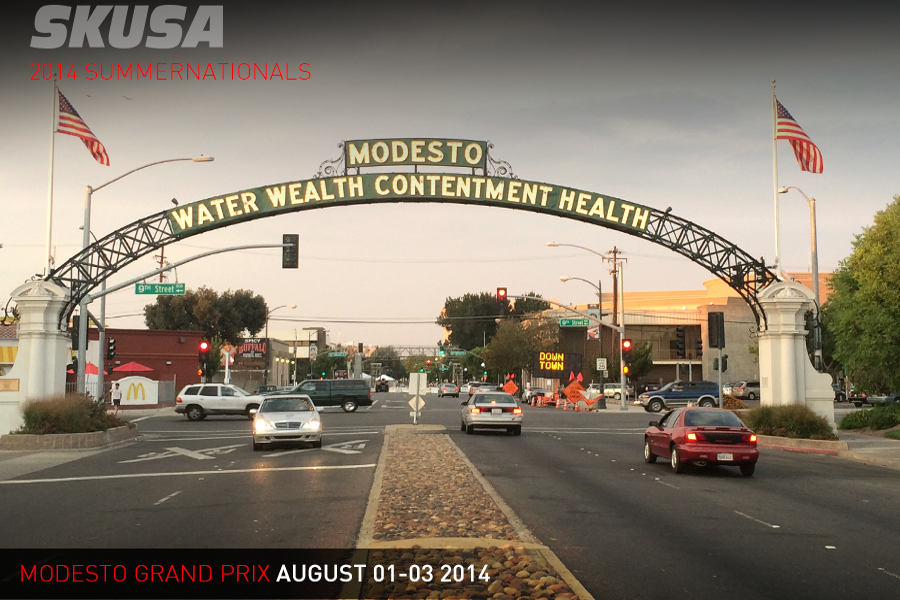 I’m a big fan of Thursdays.  For more than half the year, it’s the day that I head back to the airport for the next event, and I’m always charged up to drop the hammer and get back at it.  On this particular Thursday, I’m even more energetic knowing that I’m on my way to Modesto, CA for the country’s newest street race, which will play host to the SKUSA SummerNationals, the second round of the 2014 Pro Tour.  As I sit here on my United flight bound for San Francisco, I thought that I’d type up a new ‘Morning Coffee’ for a little Friday AM light reading.  As you read this, the final preparations are being completed on a temporary street circuit that I firmly believe will be the biggest street race that American karting has ever seen.  It’s been many years since the tremendous excitement and promotion developed by the Elkhart Grand Prix, and I think this event in Modesto is going to match and surpass the cool factor that was Elkhart.  The City of Modesto is approaching this event just as metropolitans like Long Beach, St. Petersburg and Toronto approach their IndyCar events….and that speaks volumes for what we’re about to experience. 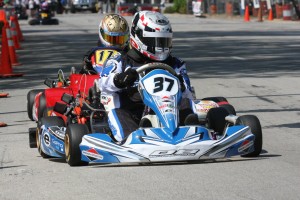 But this edition of Morning Coffee isn’t about how cool this race will be, or the tremendous marketing done in the city or the thrill of running a street race under the lights.  You’ll get all of that through the EKN Trackside coverage that David Cole and I will be publishing on EKN all weekend.  You’ll be able to get listen to our EKN Live audio broadcast of the race as well, which is being graciously presented by Praga North America.  The play-by-play will be only a mouse-click away.

Now, this is a column about respect and understanding a venue, a topic that I believe is important and one that I hope will resonate within the sport’s community and the drivers who will be pulling out onto the streets of Modesto this afternoon.   While I hope that it will find ears in every driver who will race this weekend, wherever they may be, this column is speaking directly to the 250+ competitors who are now focused on preparing for this important race in Modesto, getting themselves in the unique mindset that is needed for a street race.

Street racing is a different discipline.  There is zero room for error, and the consequences of a mental mistake are high, for everyone involved.  I’ve been attending street races for 20+ years.  I’ve raced in a dozen of them myself, and I’ve called a few dozen more from the sidelines, watching the action.  I’d like to point out a few facts to begin this morning’s brief time on the pulpit.

I’m sure that you’ve all heard the line that ‘you can’t win a race in the first corner, but you can sure lose it’.  Or there’s the other old school favorite…‘To finish first, first you must finish.’  These statements are never truer than on a fast street circuit like the one that we’re going to have this weekend in Modesto.  This race carries with it a great deal of importance, from the prestige of winning in the inaugural edition of an event to the season-long implications of a Pro Tour championship.  I know that emotions will be high as the stress and focus will be supreme.  Right now, I just ask that the racers who are preparing for this event get themselves into the right mindset.

More often than not, in street racing, success is not the product of the fastest lap or the best kart.  Instead, it’s the reward for ‘managing’ an event and knowing the limits of your kart and yourself as a driver.  Personally, I’ve been on both ends of the spectrum.  As a sporadic driver who only occasionally gets to put down the mic and race myself, I have to know my limits to find personal success.  At the Rock Island Grand Prix, I have four top-8 finishes and one memory that I can still feel in my ribs on cold day.  I found myself almost upside down in the haybales in Turn 4 when I ran out of talent (and focus) in 2005.  Four years of the right mindset, and one where I lost my focus.  I’m hugely proud of the four good years, and truthfully, still ridiculously disappointed in myself for crashing out in ’05 while running sixth in Masters Shifter.  Frankly, I succumbed to red mist.  Dumb. 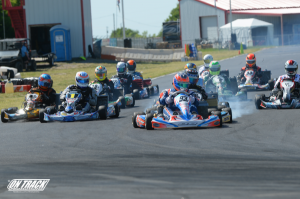 Bumpers are leading to drivers not respecting others, and the sport

I certainly understand the competitive fire that drives us all to slip behind the wheel, and the thrill of experiencing what a badass 125cc shifter or TaG rocket can do, especially powering down a city street.  It’s incredible.  But all successful racecar drivers know how to win, and sometimes, it’s not about sheer speed…instead, it’s about knowing your racecar.   The first driver to the finish line wins the race, not the guy or girl with the fastest lap.

And the real reason that I was motivated to write this column, ahead of 240+ drivers who have my ultimate respect, heading out onto the streets of Modesto for the first time, is this.  I’ve had the chance to attend many events this year and I’ve been quite disappointed by the quality of driving I’ve seen and I don’t want to see that here this weekend.  Truly, what we’ve witnessed this year has been pretty ugly at times.  Starts have been horrible, guys drilling the kart in front of them to make room, showing virtually zero racecraft.  It’s no wonder the greats like Haddock and Dismore wonder what’s going on.  Those guys paired aggression with finesse, which was needed when you didn’t have 30 pounds of plastic guarding your feet and wheels, providing the karting version of a battering ram.  From where I sit, we’re seeing a pretty serious problem in the sport of karting right now, especially at the upper levels of national competition.  Somewhere, at some time, and I’m not sure when it was, racecraft and respect for the purity of the sport got thrown out the window.  The racing that I’m seeing these days, normally behind the high-quality driving and competition up front, is absolutely brutal (I used ‘normally’ because it’s happening with the big guns too, on occasion).  Guys are throwing their karts into the first corner after a green flag with no respect towards others, hammering the guy in front of them, punting them all over the place.  And it’s happening throughout the grid.  And really, who is teaching them this ridiculous approach?  When did this become OK?

I’ve said it a thousand times, with the excessive bodywork we have now, it’s up to the officials to police the contact.  There’s very little in terms of personal penalty for punting a competitor, because you can just bounce off and continue.  If the front nosecones were gone, it would certainly change the complexion of the opening corner, wouldn’t it?  And trust me, I realize how hard it is for the officials to call anything in the first corner.  It would be akin to an NHL referee listing up the penalties after a bench-clearing brawl.

And this is why I’m making these statements right now, in today’s ‘Morning Coffee’.  We’re preparing to dive into the biggest street race that this sport has seen in many years, giving the Elkhart Grand Prix the credit it’s due.  Karting will be on display to a huge community this weekend, and the positive effects for the NorCal racing fraternity could be huge.   The first 90-degree right hander of this eight-turn layout in Modesto could show the incredible racecraft of our sport’s finest…OR…it could be yet another example of a real issue in the sport of karting.  This will be up to the drivers who are in the seats this weekend.

So here’s my request.  Whether you’re racing in the SummerNats here in Modesto or at any of the other great national, regional or clubs events around the country this weekend, please consider showing respect for the sport, your fellow racers and the legendary karters past and present, still with us or passed, by embracing the purity of the sport.  Karting is pure racing, and boils down to the admirable fight for one small piece of the track…the apex.  If your competition wins the apex in one corner… kudos to them.  Honor them by accepting the result of that single battle, and go fight for the next apex or the next or the next.   Using the bumper and blocking have one thing in common…they are instruments of the talentless.  Be above that, be better, honor the sport and respect the demands of badass street racing.

May the wise prevail.