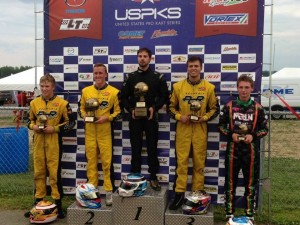 John Paul Southern Jr. lived up to his reputation of being one of the fastest sportsman drivers in the country. On Saturday, the Ohio driver improved from an eight place qualifying position in Mini Rok 60, winning the 16-lap feature event. In Yamaha 100 Cadet, Southern Jr. backed up his Mini Rok performance with a third place finish from an 18th place qualifying effort. On Sunday, John Paul would collect more hardware in Yamaha 100 Cadet. After qualifying third, the twelve-year-old would hold station through the 16-lap final, finishing third. In Mini Rok 60, John Paul would unfortunately break down while leading the feature event. Ian Hornish turned more heads in Pittsburgh. The 12-year-old did not finish on Saturday due to an on track incident, but would qualify 14th in Yamaha 100 Cadet on Sunday in just his second national level event. Hornish would fall to 18th by the end of the final, but secured yet another top 20 finish following his performance at Michiana Raceway Park. Ian Ditson would also finish in the top 20. The first year driver made his USPKS debut in Pittsburgh, running only on Saturday, Ditson would finish 19th. Dawson Crum was another PCR driver making his USPKS debut in Pittsburgh. Competing in Yamaha 100 Rookie, Crum would bring home a top 10 finish in his USPKS debut, finishing 9th. The PCR cadet chassis was the chassis used to propel these drivers to their phenomenal results.

Ryan Norberg continued to set the standard in Leopard Junior. On Saturday, Norberg would show incredible perseverance bouncing back from a DNF in his first heat, winning the second heat by five seconds. Starting in the ninth spot for the feature event, Norberg wasted no time getting to the front, taking the lead by the second lap and never looking back, winning by 3.7 seconds. Nolan Ruocco would step on the 4th step of the podium to put two PCR drivers in the top five. Come Sunday, weather would play a factor. Unfortunately, for Norberg, starting from the 5th position, engine failure ended his day while Ruocco drove to the front with a stuck throttle, placing a respectable 6th. Sasha Brun-Wibaux also competed in Leopard Junior. The TruTV star had a string of bad luck in Pittsburgh, failing to finish both finals while running inside the top ten. Nick Luedeke competed in both Leopard Junior and Yamaha Junior. In Leopard Junior, Nick drove from a 13th place starting position to finish 6th on Saturday, just missing out on the podium. In Yamaha Junior, Nick would not take no for an answer. Starting fifth, Luedeke improved to finish fourth, just .402 shy of victory. On Sunday Luedeke would be caught up in an incident in the heat race, forcing him to start from the rear in the final. The young PCR pilot would drive from 18th to fifth, passing for the last podium spot on the last lap, securing his second podium of the weekend. Evan Fritts backed up his podium from the most recent WKA Manufacturer’s Cup event with a stellar drive on Saturday. After being involved in incidents in the heat races, Fritts would start 15th and charge through the field, finishing fifth, joining Luedeke on the podium. Savannah Fitzgerald and Jordan Griffith also competed under the PCR banner in Yamaha Junior. On Saturday, the duo finish 9th and 10th respectively, earning top ten honors. On Sunday, Griffith would notch another top ten, finishing 10th with Fitzgerald not far behind in 11th. All drivers utilized the PCR Super Strillo chassis to achieve standout results.

PCR outshined the competition in Leopard Pro. AJ Myers would take the points lead in Pittsburgh, finishing second both days. Robert Bujdoso qualified pole position on Saturday and after being involved in an incident in one of his heat races, drove to a third place result. On Sunday Bujdoso would be involved in more incidents dropping from sixth to last in the heat race, in the rain Budjoso would be involved in yet another incident but would show fantastic race craft, finishing 13th. Andrew Bujdoso put another yellow suit on the podium Saturday, qualifying 9th and racing his way up to fourth, just behind older brother Robert. On Sunday, Andrew would qualify sixth and finish 12th in the treacherous conditions. Austin Jordan joined the team for his second ever USPKS event, visiting the Pittsburgh circuit for the first time. The Florida driver would finish 12th in the dry, almost matching his best USPKS finish of 10th. In the rain on Sunday Jordan would bring home a 17th place finish, surviving the lightening storm. All PCR Leopard Pro drivers competed aboard the PCR Mxk8 chassis.

Francois Brun-Wibaux would double up in the Parilla Challenge category on his PCR Mxk8, winning both the Saturday and Sunday finals. The sweep of the weekend puts Francois right in the thick of the points battle heading to New Castle.

“What a weekend for all Checkered Motorsports drivers!” Stated an ecstatic team owner Csaba Bujdoso. “All drivers performed superb on their PCR chassis, collecting great results in every category. We have the chance to win multiple national championships at the last round of the series in New Castle, thanks to the on track performance of our drivers aboard their PCR chassis!”