Round Six of the Los Angeles Karting Championship took place this past weekend (July 27) at the CalSpeed Karting Complex in Fontana, California. The championship chases have been defined with the series now past the halfway point of the 2014 season, and the pressure is beginning to build with the end nearing. Exciting action was the theme at sixth event of the year – just as it has been all year – as many races came down to last lap battles, or were won in dominant fashion. Roughly 180 drivers were greeted by the friendly and helpful LAKC staff as the sixth race day of the year went off smoothly and on time. 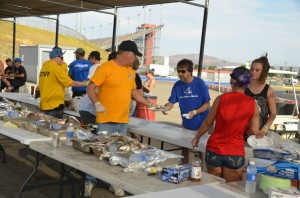 The Los Angeles Karting Championship hosted a dinner to celebrate the season and to thank all the competitors, shops and families for their participation (Photo: LAKC.org)

After scoring the opening round win to begin the 2014 season in the Mike Manning Karting PRD Senior Pilot class, Luis Perez returned to the top of the podium Sunday. Perez began the day quietly after qualifying in the fourth position behind KC Cook, Michel Manning, and Jin Bai. The Prefinal saw Perez gain a spot to finish third, as polesitter KC Cook was shuffled to the fourth position while Bai held off Manning for the win. Perez was patient through the first half of the main event, with his calm demeanor being rewarded. After getting around Manning for the second spot on lap four, Perez stalked leader Bai for the next seven laps. Lap 11, Perez made his move for the lead on Bai, and never looked back. Perez drove to his second victory of 2014 with Bai in second and point leader KC Cook completing the podium.

Despite most of the day belonging to Paul Bonilla, and the PRD-USA bounty of $1,000 on his head, it was a first time winner who stood tall at the end of the day in the D Power Racing PRD Senior class. David Vasquez claimed his first class victory and the bounty money in the category this past Sunday, as he beat out Bonilla for the win. The day started off for Vasquez by qualifying in the fourth position behind Robby Stanovich, Nathan Seegrist, and Bonilla. It was Bonilla who stayed on point by leading every lap of the Prefinal, grabbing the win ahead Stanovich. Behind the leaders, Vasquez gained a spot to finish in the third position. Bonilla got out to an early lead, and led the first 10 laps of the feature. Vasquez, who had taken the second spot away from Stanovich on lap one, got around Bonilla for the lead on lap 11. Leading the last six laps, Vasquez beat out the Round One winner for the victory. Behind Vasquez and Bonilla on the podium was Stanovich. Nathan Seegrist and Jordan Robertson were fourth and fifth.

One of the largest classes of the weekend was RPM TaG Cadet category, with 20 entries. Point leader Myles Farhan got the party started by grabbing the pole position in qualifying. Farhan outran Round Five winner, Jagger Jones for the top spot, with Anthony Willis, Tomas Mejia and Ryan Schartau completing the top five. Jones got a great start in the Prefinal jumping to the lead. After falling to fourth at the end of lap one, Jagger eventually worked back to the lead and scored the Prefinal win ahead of Willis and brother Jace. The final saw Jagger lead the way until the final lap, where he and Anthony Willis engaged in an epic last lap. The two went back and forth, with Willis crossing the line first. Jagger settled for second, while Mejia completed the podium.

Racing together on the track this weekend were two full fields of racers in the Fleming Racing Junior 1 Comer class and the Empire Karts Junior 1 Comer Pilot category. In Junior 1 Comer, Jagger Jones scored the victory. Ryan Schartau out-qualified Jones for the pole position. Jones, however, raced around Schartau to earn the Prefinal win. The main event was all Jones as he led every lap and picked up the win by three seconds ahead of second place finisher Colin Queen. Completing the podium in third place was Daniel Inzunza. Jalen Mack dominated the day in the Junior 1 Comer Pilot category. Mack was on top from qualifying through the main event. Behind Mack was Ryan McElwee and Cole Keith Cotham. 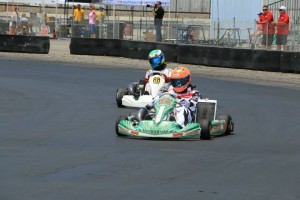 Hannah Grisham had a solid day in the Mack Motorsports PRD Junior 2 class Sunday. Looking to improve on her fifth place championship position, Grisham made noise when she beat Aaron Aguirre by three tenths of a second for the pole position. From qualifying, Grisham went on to battle for, and ultimately score the win over Andrew Murowatz. Unfortunately, for Grisham her great day was ended after only one lap in the main event. Andrew Murowatz was the beneficiary of Grisham’s retirement. Murowatz led every lap of the main event and drove to a near six-second win over Chance Skaufel. Tyler ReviereVerninas came home in the third position.

Carson Morgan scored his second victory of the season in the Pure Karting Honda Kid Karts class. Three-time winner Cooper Hicks showed speed to start the day by winning the pole position. Exactly one second slower than Hicks was Dane Idelson in second. Chance Gibson, Nick Curry and Morgan completed the fast-five. Hicks raced with Gibson early in the Prefinal before picking up the win. From fifth on the grid, Morgan drove to finish second, earning him a front row staring spot in the final. The 10-lap main event featured back and forth racing between Morgan and Gibson. The two drivers dueled the entire race, with Morgan pulling out the victory on the final lap. Gibson was right behind in second, with Dane Idelson in third. Cooper Hicks and Logan Ainsworth rounded out the top-five.

Billy Musgrave scored a perfect day on Sunday in the 7G S1 Pro Stock Moto class. Musgrave’s record on the season moved to five wins in six races this season with Augie Lerch scoring the win at Round Two back in March. Joining Musgrave and Lerch this weekend at CalSpeed was Colorado driver Sabre Cook. Musgrave led the entire day from qualifying to the main event. Lerch was second quickest qualifying with Cook behind in third. The order stayed the same through the Prefinal as Musgrave drove to a four second win. The main event was more of the same as Musgrave checked out for the win. Lerch suffered mechanical issues that forced him to retire on lap four. Cook took over to finish in the runner-up position in her LAKC debut.

Sharing the track with the S1 field as always were the S2 drivers and the Open125. Perfect race days were scored in each of these classes as well. In the 2 Wild Karting S2 Semi-Pro Stock Moto class, it was point leader Kolton Griffin earning his fifth win of the year. Griffin laid down a 46.519, which was good enough to outrun Alan Michel for the S2 pole, and was good enough to beat two of the three S1 Pro racers. Starting on the front row alongside Musgrave, Griffin was perfect in the Prefinal as he led every lap on his way to the class win. Michel held on for second, while Chandler Campbell finished third. The main event was more of the same as Griffin checked out on the S2 field and scored the victory by leading every single lap. Joining Griffin on the podium was Cameron Jocelyn and Pete Yerkovich Jr. Slava Prikhodko swept the day in the TM Racing USA Open 125 Shifter category. Prikhodko was on top of the day from qualifying through the Prefinal and in to the main event. Finishing behind Prikhodko on Sunday was Willy Axton and Chris Curtis. Prikhodko’s win was his sixth of the year, keeping him perfect through 2014. 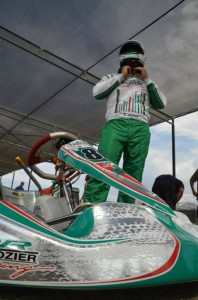 Paul Bonilla came into Round Six this past weekend sitting second in the points picture to Mike Johnson in the Phil Giebler Racing PRD Masters class. By scoring the main event win Sunday, Bonilla cut into Johnson’s point lead.  Bonilla scored the pole position after outrunning Ron Rossetti by four tenths of a second. John Bush was third quick, with Johnson in fourth. The Prefinal and the main event saw Bonilla lead a combined total of 26 laps, as he led every lap in both races. Behind Bonilla was Johnson, moving his way up the leader board throughout the Prefinal and Final. Johnson ended the day in the third position behind Bonilla and Rossetti.

The racing was action packed this weekend in the Musgrave Racing Company S4 Master Stock Moto field. Darren Elliott got things started in S4 by grabbing the pole position ahead of last month’s winner Willy Musgrave. Elliott never made it to the track for the Prefinal, allowing Musgrave to start from the pole position, and drive away to the heat race win. The main event saw Elliott return to the track to end the day, but nobody would have anything for Musgrave. The Prefinal winner drove to a seven second win ahead of Erik Jackson and Rick McAllister.

Gary Delcoure began the sixth round of racing in the Acceleration Kart Racing S4 Magnum class by beating out Steve Donia for the pole position in qualifying. Donia got around Delcoure on the start of the Prefinal and picked up the win, with the polesitter behind him in second. Delcoure stayed at the front in the final and picked up his third win of the season. Four seconds behind Delcoure was Donia and with Ken Manning joining them on the podium. Nicky Hays began his sweep of Round Six by earning the top time in qualifying in the Nash Motorsportz S5 Junior Stock Moto class. In the Prefinal, Hays raced with S4 drivers ahead of him while checking out on Anthony Sawyer and Sara Brinkac. Twelve seconds was the margin of victory from Hays to second place finisher Sawyer when it was all said and done. Brinkac finished her first race with the LAKC in the third position.

Seventeen drivers filled the grid on Sunday in the Buddy Rice Karting TaG Senior class. The timed qualifying session saw Nathan Seegrist outrun Andrick Zeen for the pole position while point leader Eric Molinatti was third fastest. The Prefinal is where Zeen nailed the start, and jumped out to an early lead, that took him to the Prefinal win. Behind Zeen was Molinatti in second after moving up from third place, dropping Seegrist to third. Despite leading the entire main event, Zeen beat Seegrist across the finish line by only one tenth of a second for the race victory. Molinatti completed the podium in third.

Peter Mokran looked to own the day in the PSL So Cal TaG Masters field, until Erik Jackson made his move in the final. Mokran started the day from the pole position, en route to the Prefinal win over Jackson and Brian Phillipsen. Jackson made the most off his front row starting spot in the main event as he jumped around Mokran for the lead. Jackson led the rest of the way and scored the final victory over Mokran with Phillipsen in the third position.

Racing in the LAKC’s Team Series continues to make each weekend fun and exciting. Teams of four drivers – each driver competing in a different class – race to not only win their respective classes, but accumulate the most points between all four racers. The Pure Karting team of Kolton Griffin, Jagger Jones (competes in both TaG Cadet and Junior 1 Comer), and Pete Yerkovich had a very successful weekend at Round Six, and will look to take over the Team Series point lead from the Smokin Fast Team featuring Matt and Mike Johnson, with Myles Farhan and Luis Perez.