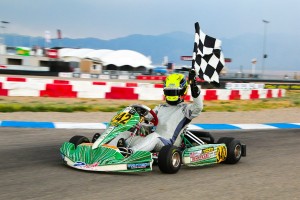 Seen as the largest Rotax only race for United States residence, the 2014 Cold Stone Creamery US Rotax Grand Nationals was a great success for Tru Tech Racing Engines. Nearly 200 of the nation’s best drivers traveled to Miller Motorsports Park in Tooele, UT for the weeklong event. Six competitors would brave the heat with Tru Tech Racing Engines power mounted to their machines, each with a goal of becoming a National Champion and earning a spot on Team USA for the Rotax World Finals in November.

The week started a little rocky with drivers looking for those extra couple tenths in qualifying. Mini Max challenger Cody Dempster (Unser Racing) battled through his heat races to improve on his 34th place qualifying position to finish 25th in the main event. Junior Max drivers Stevie Pugsley Jr. (BlackFlag Racing Products) and Enzo Prevost (ART GP America) positioned themselves through the heat races to make the 34 kart feature field. Prevost would work his way to a respective 21st place result while Pugsley was sidelined before completing the first circuit. Jonathan Shone (TB Motorsports) recorded a top-5 in the Junior Max LCQ but a driving infraction unfortunately delegated Shone outside of a transfer position.

The 2Wild Karting duo of Carlee Taylor and Jake Craig made up Tru Tech Racing Engines two Senior Max entrants. Both Craig and Taylor showed good speed recording the 5th and 7th fastest times in qualifying. Craig continued his quick pace placing within the top-5 in each of his heats, Taylor had an off in Heat 2 moving her down the Pre-Final starting order to 12th. Taylor fought her way through the Pre-Final placing 9th with Craig just ahead in 5th. Craig would get a good start staying with the lead group, Taylor got the short end of a Turn 1 incident and would be sidelined for the remainder of the race. After a couple laps of competition Craig took the point and began to pull out a sizeable gap on the rest of the field. At the end of the 20 lap feature Craig collected his first US Rotax National Championship and the first for Tru Tech Racing Engines.

Tru Tech Racing Engines would like to congratulate all of its drivers. It takes a team to compete at this level of racing, our drivers are our team!