Reichelt puts PSL on the podium in DD2, followed by numerous top-tens throughout the team 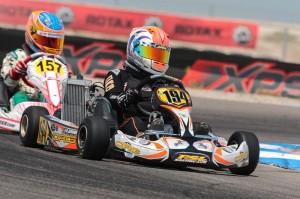 Sebastian Alvarez earned the Hard Charger award in the Mini Max class at the 2014 Cold Stone US Grand Nationals
(Photo by: Ken Johnson/Studio52.us)

Team PSL Karting travelled to Tooele, Utah with a large team of American drivers to race the 2014 Cold Stone US Grand Nationals. The #1 CRG distributor pulled their resources together to produce great results for each driver. Adding top-tens and podium finishes to their already impressive list of results for this season, Team PSL Karting looks to finish out the season with all the same success.

“I’m really happy about this week, the hard work from the entire team, and the performance of our CRG material,” expressed Dominic Labrecque, president of PSL Karting. “We worked hard to test and prepare for US Nationals more than previous years.”

Team PSL Karting’s rookie Micro Max driver Gino Sandoval made a good effort considering his recent premiere in the class. The young driver did not put in a qualifying time, therefore starting from the back of the pack for wheel-to-wheel action to come. In his three heat races, Sandoval finished in 16th, 13th and 11th, starting him in 13th for the prefinal, where he would also finish. In the main event on Sunday, Sandoval finished in 16th place for his first US Rotax Grand Nationals experience.

In the Mini Max class, Sebastian Alvarez had a fantastic weekend up until to his prefinal. After qualifying on pole and finishing first, first, and second in his three heats, the rising talent encountered some bad luck after starting on the pole position for the prefinal on Championship Sunday.

“Alvarez, in his all new CRG-Hero (Mini Max) chassis was really in another world, breaking the track record and always staying three tenths quicker than the entire field, including taking the pole position without a slipstream,” expressed Dominic Labrecque, president of PSL Karting. “In the prefinal, starting on pole, a small error forced Sebastian to dead last and a retirement. In the final, Sebastian finished sixth from 32nd on the grid, and received the Hard Charger award. We are really proud of Sebastian and his accomplishments!”

PSL’s other Mini Max driver Matteo Sandoval had a bit of a challenging weekend. After qualifying in the back of the pack in 37th place, the driver moved up in the ranks to finish his heats in 22nd, 12th and 15th. After finishing third in the last chance qualifier, Matteo finished 24th in the prefinal before incurring an unfortunate DNF in the final race.

In the competitive DD2 class, Team PSL Karting brought six drivers to top finishes. Gavin Reichelt, the youngest driver of the group at age 16, brought home a podium finish to end a successful weekend. His qualifying position of fifth place led to a fourth place finish in each heat, starting him in fourth for the prefinal. The young driver gained one position to finish third in the prefinal, and after leading laps in the beginning of the main event, Reichelt held third place for most of the race while on-and-off rain kept the conditions switching between wet and dry. During the last few laps of the race, an exciting battle between the second, third and fourth place positions kept the attention of spectators. In the last corner, Reichelt made his move for third place, placing him on the championship podium.

Seventh place final finisher in DD2, Alan Rudolph, is usually a DD2 Masters driver. Having already qualified for the Rotax Max Challenge Grand Finals, the seasoned veteran took on the young guns in the DD2 category, but an engine issue plagued the talent all week. Rudolph qualified in ninth, and finished his heats in order to start his prefinal in seventh. After a sixth place prefinal finish, with only one engine checked in for the weekend, Rudolph battled for positions with a few drivers during the main event. Ending ultimately in seventh place, Rudolph’s efforts were an accomplishment considering his lack of power.

Nathan Mauel, a PSL driver who has already attended the World Finals in the DD2 class five times, finished behind his teammates in eighth place. Qualifying in 13th place and finishing his heats in 12th, 10th, and 12th, he started his prefinal in 12th. After finishing in 11th in said prefinal, Mauel worked up a few more spots to finish the final in eighth.

Finally, CJ Cramm finished off the roster of PSL drivers in the DD2 top-ten. Cramm took sixth place in qualifying, and started his prefinal in ninth place. Cramm went on to take a ninth place finish in both the prefinal and final to add to Team PSL Karting’s top-ten results.

Up next for Team PSL Karting is a split-effort, as the Eastern Canadian Karting Championship will resume August 1-3 in PSL’s hometown of Trois-Rivières, Quebec. The same weekend, newly formed PSL West will take the reigns at the SKUSA SummerNationals in Modesto, California for the second stop of the Pro Tour.