Great Battles in Kristianstad for the First CIK-FIA Titles 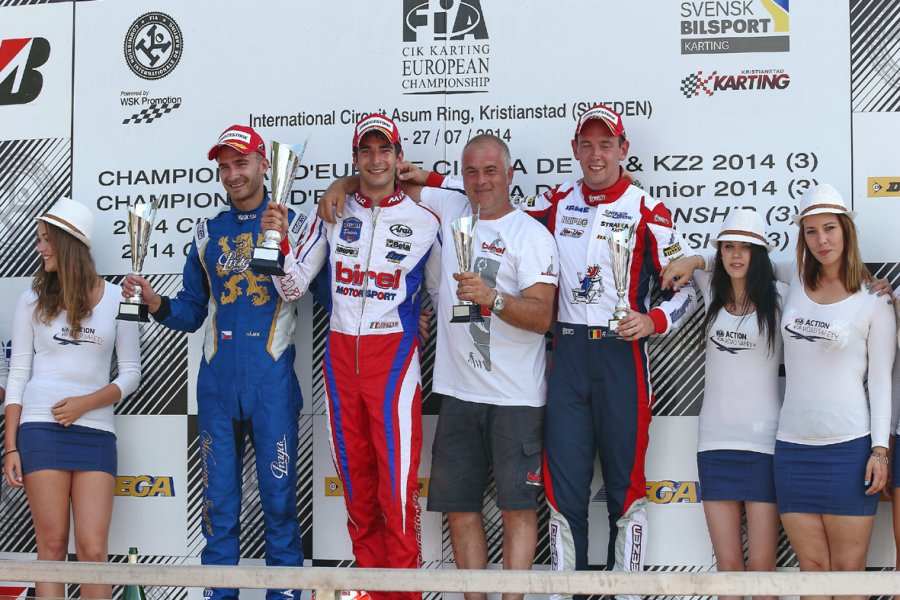 Kart racing confirmed once again to be one of the most unpredictable motorsports. The results of the first two racing days were not confirmed in Sunday’s races. The continuous changes in the standings of the KZ and KZ2 categories were the real protagonists of the weekend on the Swedish circuit of Kristianstad, the venue of the last round of the European CIK-FIA Championship. The facility hosted also the third round of the KFJ Championship, in front of 2000 people. Thanks to heated and thrilling races, the final results remained uncertain until the end.

De Conto wins the Final,  Dreezen scores a podium position and wins the KZ Championship
Rick Dreezen (Zanardi-Parilla-Bridgestone) was rather lucky throughout the whole weekend. He arrived in Sweden as the leader of the category but in qualifying placed only 17th. The Belgian closed the gap in the heats, achieving the third row of the Prefinal. Two strong drivers joined the race towards the title: the Belgian Jonathan Thonon (Praga-Parilla-Bridgestone)  and the Italian Marco Ardigò (Tony Kart-Vortex-Bridgestone). Unfortunately, they did not do well in the Prefinal while, on the contrary, Dreezen managed to grab the front row of the Final, in second position next to the pole-sitter, the Czech Patrik Hajek (Praga-Parilla-Bridgestone). Dreezen just controlled the Final, while his two most dangerous rivals were trying to close the gap starting from the middle of the grid. The Belgian was involved in a hard battle against an extraordinary Paolo De Conto (Birel-TM-Bridgestone). Also the Czech Patrik Hajek (Praga-Parilla-Bridgestone) joined in. The Italian driver, who had achieved a great recovery in the Prefinal, gained an early lead, keeping at bay  both Dreezen and Hajek. Behind them, the Dutch Bas Lammers (FK-Parilla-Bridgestone) and Jorrit Pex (CRG-TM) fought hard and, eventually, Pex managed to score a fourth position beating Lammers into fifth position. Behind the winner, De Conto, Hajek was the runner-up and Dreezen was happy with a third position which allowed him to secure the win in the European Championship. 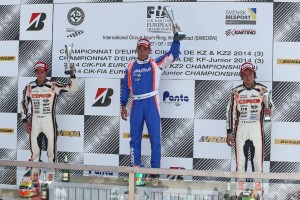 Lundberg wins on the home circuit and. Dalè wins the KZ2 title
The Swedish Douglas Lundberg (Alpha-Parilla-Bridgestone) achieved the perfect race on his home circuit. He was on top throughout the whole weekend until the final victory. He battled against the German Maik Siebecke (CRG-Modena-Bridgestone) in qualifying until the latter sent his kart spinning in the Prefinal. The man to beat was Simas Juodvirsis (Energy-Maxter-Bridgestone), who arrived in Kristianstad as the leader of the Championship. Unfortunately, the Lithuanian had a gearbox failure and could not remain with the top drivers and had to give up the hope of becoming the European Champion. So, behind a flawless Lundberg  the runner-up was Felice Tiene, third another Italian, Fabian Federer (both on CRG-Maxter-Bridgestone). For the Italian Andrea Dalè (CRG-Maxter-Bridgestone) it was an unforgettable Final: he had to recover many positions and to close the gap with Juodvirsis. Dalè managed to score the fifth position, which was enough to win the title, just ahead of Lundberg.

Travisanutto is the new top driver in KFJ
The third out of four rounds of the European CIK-FIA Championship for the KFJ category saw the outstanding performance of the Italian Andrea Travisanutto (PCR-TM-Vega), who took the place of the Italian Leonardo Lorandi (Tony Kart-Parilla-Vega) and the British Daniel Ticktum (Zanardi-Parilla-Vega), the winners of the two Prefinals. Travisanutto, on the last lap of the Final, had the upper hand over the Danish Christian Lundgaard (Tony Kart-Vortex), the leader of the race up to that moment. In the last phase of the race, also the Dutch Bard Verkroost (FA Kart-TM) and the German Mick Junior (Tony Kart-Vortex) took part in the battle for the podium. The German driver managed to score the third position, starting from the 23rd slot on the starting grid, behind the runner-up,  Verkroost. Junior’s third position was made possible by Lundgaard’s disqualification for cutting the track. The English Enaam Ahmed (FA Kart-Vortex) is still the leader of the Championship.