From the Tower: 2014 Cold Stone US Grand Nationals 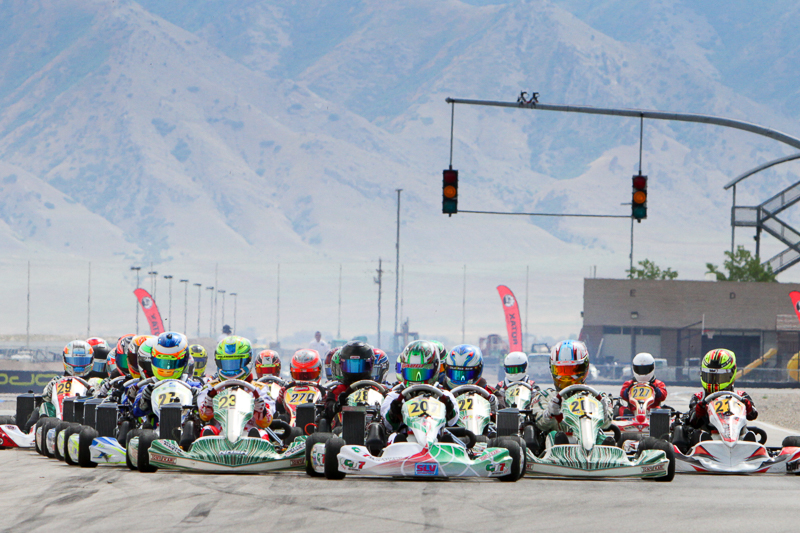 US Karting’s annual ‘Rotax Week’ took place from July 14-20 at the pristine Miller Motorsports Park in Tooele, Utah, and was yet another big event. Nearly 200 drivers participated in the seven categories at the 2014 Cold Stone US Grand Nationals. After six straight days of dry weather and above 90 degree temperatures, rain rolled in on Sunday to disrupt a few of the main events, which added to the already-tense atmosphere surrounding the competitors and teams going for the Rotax national championships.

Structure to the MAX
After taking over the United States Rotax Max Challenge program in 2011, the MAXSpeed Group has strived to improve every facet of the Rotax program in America. The improvement has not only been focused on the distribution side of the business, but also the racing component. A strong dealer network is continuing to grow and improve, and over 20 USRMC racing programs compete throughout the season, qualifying drivers for the annual US Rotax Grand Nationals. With the five events under their belt – three Grand Nationals, one Pan American Challenge, and the 2013 Rotax Grand Finals – the entire MAXSpeed crew and its trackside operation staff were well prepared to put together one of the best events in Rotax history.

Serious Fun Finds a New Home
During the event, it was announced that the MAXSpeed Group had purchased Formula Kart Productions, including the Florida Winter Tour series. Longtime promoter Bill Wright and MAXSpeed’s Richard Boisclair finalized the deal during the final day of practice, provide some interesting dinner time discussions that evening. Wright, who was the co-announcer for the Cold Stone US Grand Nationals, commented that he was looking for the right person or company to take over what he built from the ground up, and would continue the program’s legacy into the future. Boisclair confirmed their intentions to keep the FWT program intact, putting a MAXSpeed ‘touch’ on how things off the track are conducted, and continue to provide the ‘Formula Kart’ events that include shifter and TaG categories. Garrett Potter – the former track manager at the NOLA Motorsports Park – has been hired by MAXSpeed, and will be a crucial part of the new FWT alongside USRMC director Josh Smith.

Plenty Awards and Prizes
On Friday evening, MAXSpeed and MRP Speed Schools hosted a Welcome Party. Nearly everyone from the paddock attended, and an unfortunate mistake by the catering company left some people still hungry after arriving late. Despite the food issue, the party was a success with a number of raffle prizes being handed out. Boisclair emceed the ceremony, which also included recognizing Koene USA SuperPole winners Thomas Issa and Sting Ray Robb. Boisclair’s enthusiasm was to the ‘MAX’, providing a unique way of to include more than just the winner in the raffle prizes. Mini and Micro Max competitors were invited to take part in a Pinewood Derby – won by Payton Durrant.

In addition to the party prizes, MAXSpeed awarded cash prizes for the podium finishes along with a Hard Charger trophy for each division. The nine drivers who earned tickets to the Rotax Grand Finals, finishing first or second in their categories, won a stellar $2,000. Third place in those for classes (DD2, DD2 Masters, Senior Max and Junior Max) won $500 for their efforts. Masters Max runner-up was awarded $500 with third place receiving $250. Mini and Micro Max podium finishers split $900 each – $500 to winner, $250 to second and $150 to third. 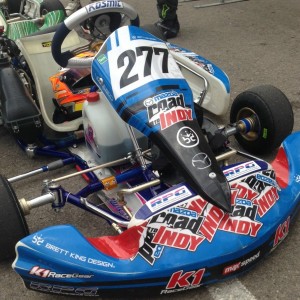 Passing Clinic
One of the favorites going into the weekend was Junior Max driver Austin Versteeg. Making his third start in the category at the US Grand Nationals and competing at his home track, the odds were in the favor of the 2014 Rotax Challenge of the Americas champion. Versteeg had bad luck strike during his out-lap in qualifying, as a hub bolt snapped and sent his Mojo tire flying off his Kosmic. That sent him to the 24th grid position for his three qualifying heat races. With composure and skill, the Rolison Performance Group driver made his way forward in all three to finish inside the top-eight to earn a ninth place starting spot in the Prefinal. After falling back at the start, he fought his way back to the eighth. Lap one contact once again dropped Versteeg down the order, falling back to 15th. Running lap times similar to that of the leaders, Austin climbed his way onto the podium with a last lap pass for third. In total, Versteeg passed 73 karts over the course of five races. The highlight? No tire marks on his Mazda Road to Indy livery bodywork.

Making History
Last year, DD2 national champion Daniel Formal made history, as he became the first driver to win four titles in four different categories (Mini Max, Junior Max, Senior Max, DD2). This year, Nick Neri entered the Cold Stone US Grand Nationals as a three-time champion, winning Mini Max, Junior Max and the Senior Max back in 2011 at Miller Motorsports Park. Throughout the event, Neri was chasing Alessandro Bressan. When the wet weather came, the Ocala Gran Prix/Tony Kart driver was able to pounce and took advantage to earn his fourth title, matching the win total set by Formal and Jordon Musser (three times in Senior Max, one in DD2). The interesting fact is that Neri has won his four Rotax Grand Nationals the year following Formal’s victories in all four categories.

Young Guns Continue to Challenge in Senior Max
The Senior Max division has become the battle of young guns, with the last four champions, including this year’s title winner Jake Craig, winning within their first two seasons at the top level of the sport. Throughout the weekend, it was a younger crowd at the top-10, as four Senior Max rookies were among the contenders after the heat races. 2013 Florida Winter Tour Junior Max champion Thomas Issa (J3 Competition/Kosmic) was the SuperPole winner and the first to reach the checkered flag in Heat #3 in his Senior Max debut at the US Grand Nationals. 2013 Rotax Can-Am ProKart Challenge Junior Max champion Luke Selliken (Rolison Performance Group) won two of the heat races, and 2013 Rotax Grand Finals Junior Max top qualifier Kyle Kirkwood (Ocala Gran Prix/Tony Kart) won the Prefinal. When the final checkered flag waved, however, the top rookie was RPG’s Blaine Rocha in the fifth position, who rose up after battling an illness all week long.

Hometown Hero Triumphs
One of the best stories throughout the weekend was the performance of Utah pilot Ken Maxfield. The hometown Masters Max driver circled this event on his calendar after suffering an illness last year that put him in the hospital. Upon returning home, he went on to compete in the Rotax Challenge of the Americas this past winter. In the COTA series, his endurance was not as he hoped, and it was visible on-track. Over the next four months, Maxfield trained hard to be ready for the grueling week that is the US Grand Nationals. He lasted the 20-lap final with the strength to hold off Scott Roberts, and earn his first national title. Listen in to his interview, along with others throughout the week, in the Paddock Insider.

One thought on “From the Tower: 2014 Cold Stone US Grand Nationals”