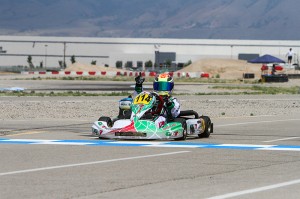 Always a threat to stand atop the podium, GT7 Motorsports driver Dylan Tavella did not disappoint this past weekend. Competing at the Miller Motorsports Park in Tooele, Utah, Tavella would reign supreme in the Rotax Mini Max division as he claimed the 2014 Cold Stone US Grand Nationals Rotax Mini Max national championship, his second national title in as many seasons. Showing speed and poise throughout the weekend, Tavella secured the victory with a bold last lap pass.

Claiming the Rotax Micro Max national title in 2013, Tavella would move to the Mini Max class at the beginning of this season. Working with his GT7 Motorsports team and tuner Charlie Swayne, the duo has been honing their skills at national events across the country. Entering the 2014 Cold Stone US Grand Nationals, Tavella was one of the favorites to take the win and did so in dramatic fashion during a main event that would see both dry and wet weather action.

Starting his weekend off with qualifying on Friday morning, Tavella would turn the fifth fastest lap time in a field of 45 competitors to qualify in Group A. Starting each of his three heat races from the inside of row two, the young New Yorker would see wheel to wheel action on Friday afternoon before completing the final two heat races on Saturday.

Tavella’s Friday would come to an end early, as the multi-time race winner would be involved in a first lap incident. With damage done to his GT7 entry, the Tony Kart driver would be forced to retire before completing a lap and be classified in 23rd. Saturday’s heat two would go better for the youngster as he was able to get through the opening lap carnage and run at the front of the field. Turning the fastest lap time of the heat, Tavella would flex his muscles and show his speed to come home third. Carrying that momentum into the third and final heat, Tavella continued to improve, this time taking the heat race victory and another fast lap. With combined points, Dylan Tavella would start Championship Sunday’s prefinal from inside row seven in the 13th position.

Championship Sunday would bring some of the best racing of the year to the forefront, as nearly 200 Rotaxians would fight for national titles. Tavella would have a picture perfect prefinal driving forward from his 13th place starting spot to a third place result. Again scoring the fastest lap of the race, the talented competitor would start his prefinal from row two and have a shot at claiming back-to-back championships.

The main event would be one for the ages as the Rotax Mini Max field took the green with rain on the horizon. Running the opening laps in dry conditions, Tavella worked his way to the point and looked to be the driver to beat early. As the rain began to fall and track conditions became tricky, a five way battle for the lead would ensue. Tavella continued to lead the way with a five-kart length gap over his rivals before the rain would subside and conditions began to improve. With lap times improving with each and every circuit, Tavella would eventually be caught by a fellow competitor and gave up the lead with only six laps remaining. Staying close to his competitor and stalking him lap after lap, it wasn’t until the final circuit that Tavella made his bid for the lead. Making a bold move down the inside of one of the trickiest sections of the track, the talented Tony Kart driver took the lead and never looked back. Taking the victory by a scant .035 seconds, Tavella was crowned the 2014 Cold Stone US Grand Nationals Rotax Mini Max champion, his second national title in as many seasons.

Dylan Tavella would like to thank many people who have contributed to his successes: Charlie Swayne, the best tuner in the country and for putting up with me when I don’t listen. Chase Racing, for believing in me and providing me with the power plate to race with. Anthony Gangi Jr., my friend and teammate for always helping me with driving lines and making sure I stay focused. Anthony Gangi, for helping my dad to think outside the box. Willie, Matt, Chris and Phil, for being behind the scenes and making me the parts I need. OVRP, for helping me learn how to drive on the hardest track in the country. Also, thank you to all my sponsors for your support: Philip Joseph Jewelers, Argyle Jewelers, GT7 Motorsports, Diversified Private Wealth, K1 Race Gear, Oakland Valley Race Park, Iron Rock Motorsport, A.G.C Machine Corp, as well as Richard and the entire staff of Rotax for putting on the best event and Payton Durrant and Michael d’Orlando for racing me like true professionals. And most importantly, Mom and Dad, you guys have given up everything for me so that I can live my dream. Thank you for everything!

For more information on Dylan Tavella including news, profile, media and contact information, please visit him online at  www.DylanTavella.com.