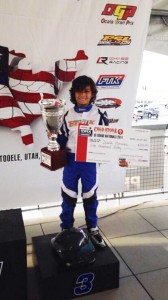 Descending on the Miller Motorsports Park facility in Tooele, Utah for the second time in four weeks, BENIK Kart would look to carry their momentum from the first half of the 2014 season. With race wins and podium results in almost every series of competition, four talented Rotax Micro and Mini Max competitors would look to stand atop the box at the 2014 Cold Stone US Grand Nationals as they competed for Rotax National Championships.

“Though the results were not exactly what we were looking for, the speed was definitely there,” explained Nick Mitchell, Co-Founder of BENIK Kart. “With only four drivers under the team tent, all four would be run in the top-ten throughout the weekend.”

Entering three drivers in the Rotax Mini Max category, Lachlan DeFrancesco, David Morales and Jordan Heffner would fight for the victory. Progressing nicely through the heat races and on to Championship Sunday, the trio would start the day in the top-ten as they chased the championship. DeFrancesco and Morales would lead the way in the prefinal as the duo ran at the front of the field. DeFrancesco would hold the point early but would end the prefinal in second after a hard fought battle while Morales had the speed, but would end the prefinal in fifth. In the main event, it was David Morales that would get the most out of his BENIK Kart as he quickly jumped to the front of the field. In an intense five-kart battle just past the half waypoint, Morales would end his 2014 Cold Stone US Grand Nationals with an impressive third place result, adding another podium to the BENIK Kart resume.

Chase Heffner would be the lone BENIK Kart entry in the Rotax Micro Max field and he was one to be throughout the weeklong event. Qualifying in the top-five and running all three of his heat races at the front of the field, the youngest of the Heffner family would jump to the lead during the main event. Leading the majority of the final but falling to second in the weaning laps, Heffner made a bid for the top spot on the final circuit but would fall victim to an incident ruining his chances. As the two leaders tangled, Heffner would eventually remove his kart from his competitor and end his Grand National event in sixth.

Mitchell continued, “I would like to congratulate all the BENIK Kart drivers on a great weekend. The speed of our program is quickly becoming apparent across the United States and we are looking forward to the remainder of the 2014 racing season.”

With no time off, BENIK Kart will travel back to the Midwest and compete at the United States Pro Kart Series event at the Pittsburgh International Race Complex. With a host of drivers competing in a variety of different classes, BENIK Kart will once again look to rise to the top step of the podium and set their drivers up for a shot at the overall series championship.

For more information on BENIK Kart, please contact Nick Mitchell or Ben Cruttenden via e-mail to Info@Benik-Kart.com or by phone at 754.206.4870. BENIK Kart can also be found online at www.Benik-Kart.com or on Facebook at www.facebook.com/BenikKart and Twitter at @kartBENIK.