Surprises in Kristianstad During Qualifying for CIK-FIA European Championships 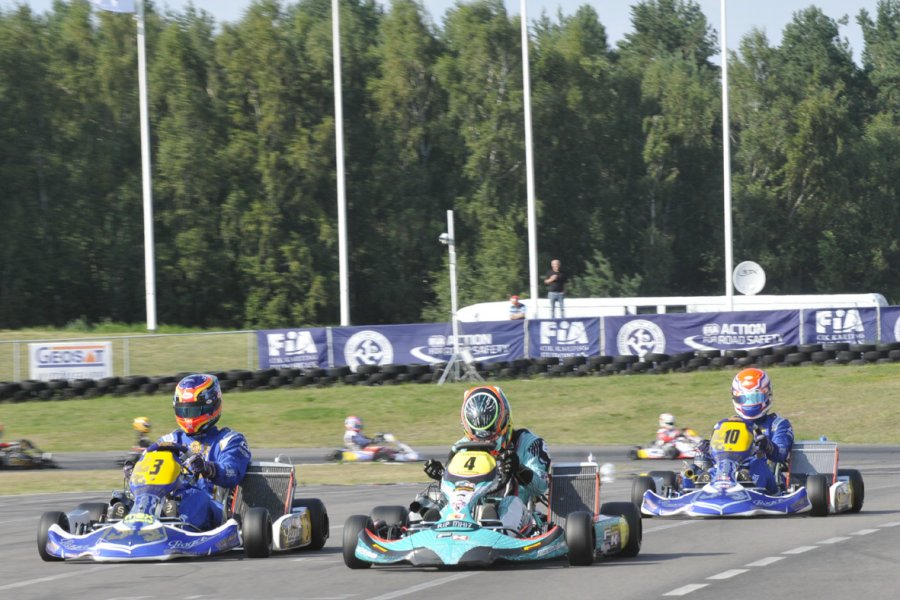 The race to the European titles has started. Today, in Kristianstad (S), the event which will award the European CIK-FIA titles for the KZ and KZ2 categories on Sunday has got into top gears. On schedule also the third – out of four – round of the European KF Junior  Championship. Today’s programme was dedicated to the qualifying practice, after a long free practice session which had begun yesterday morning. In the evening, the 156 scrutineered drivers for the Swedish event took part in the first qualifying heats. The race is hosted by the Asum Ring Circuit, a 1,213 meters-long track set in Norra Asum near Kristianstad, in the county of Scania.

Patrik Hajek achieves the pole in KZ
After the success in KZ of the Belgian Jonathan Thonon (Praga-Parilla-Bridgestone) in the previous round in Germany, the Praga Kart Racing team is back on top thanks to its other driver, the Czech Partik Hajek. In Kristianstad he set the fastest time thanks to his 51”524. Thonon completed the successful session of their team placing behind Hajek, with a gap of 148 milliseconds. Behind them, two other pretenders to the European title:  the Dutch drivers Jorrit Pex (CRG-TM-Bridgestone), third 0”205 behind, and Bas Lammers, fourth at 0”240. The Italian Marco Ardigò (Tony Kart-Vortex), second of the current Championship standing, placed at 0”273 with the fifth time, ahead of the English Jordon Lennox-Lamb (CRG-Maxter), with a gap of 0”301. The current leader did not do well: the Belgian Rick Dreezen (Zanardi-Parilla) is only 17th, 0”731 behind Hajek.

Correa, an underdog gives the chase to success in KFJ
Surprises never end in KFJ. The American Juan Correa (Energy-TM-Vega), only 20th in the Championship, is the first in qualifying in Kristianstad thanks to his 52”271. He placed ahead of the English Martin Ross (Tony Kart-TM-Vega) for only 8 hundreths of a second. Two other underdogs, the Dutch Bard Verkroost (FA Kart-TM-Vega) and the Belgian Ulysse De Pauw (Kosmic-Parilla-Vega) placed behind the American. Behind them the Chinese Sun Yeu Yang (FA Kart-Vortex) and the Swiss Clément Novalak (Kosmic-Vortex): they are all occupying the last positions of the Championship standing. The top drivers, on the other hand, are experiencing a rather hard time: the leader, Enaam Ahmed (FA Kart-Vortex), is only 22.

Tiene attacks in KZ2
The surprise in KZ2 is the Italian new entry Felice Tiene (CRG-Maxter-Bridgestone). He achieved success immediately in qualifying, grabbing the pole thanks to his 51”896, ahead of the Italian Andrea Dalè, 16 milliseconds behind. The latter responded to the Lithuanian Simas Juodvirsis (Energy-Maxter-Bridgestone), who placed only 14th today, after he had  conquered the top of the Championship standing in Germany. The Swedish Douglas Lundberg (Alpha-Parilla-Bridgestone) is 3rd 0”029 behind, followed  by the Spanish Jorge Pescador (Praga-Parilla-Bridgestone) at 0”142. In this case, too, lots of the fastest drivers of qualifying are trying to redeem themselves, given that they are quite far from the top positions of the Championship. This is the case, for example, of the Swedish Joel Johansson (Righetti-Parilla), fifth at 0”161, and the Dutch Marijn Kremers (Birel-TM), sixth at 0”187.

The first qualifying heats
This evening, the first qualifying races were as heated as expected. The first KZ race was won by Thonon, after a gripping duel against Lammers. The KFJ, after the first success of Correa, saw the victory of the German Mick Junior (Tony Kart-Vortex-Vega) and of the English Daniel Ticktum (Zanardi-Parilla-Vega). Finally, the two KZ2 heats were won by Lundberg and Pescador.

Don’t miss the live streaming
Great expectations for Sunday’s Prefinals and Finals which will follow the qualifying phase. Fans will be able to watch the event from the drivers’ parade at 10:15 until the last podium on www.cikfia.tv and www.cikfiachampionship.com. On Rai Sport 2, on Wednesday 30th at 18:00, the delayed broadcast of the finals. The special TV report is scheduled for next Friday 1st August, always on the same channel.

Ahmed defends his leadership
In KFJ the British Enaam Ahmed (FA-Vortex-Vega) and the American Devlin Defrancesco (Tony Kart-Vortex-Vega) lead the standing separated only by a point. They will try to pull away  in the Championship before the final sprint on schedule at the end of August in England. Their most dangerous rivals are  the Swedish Anton Haga (Kosmic-LKE-Vega), who will be driving on his home track, and the American Logan Sargeant (FA-Vortex-Vega).