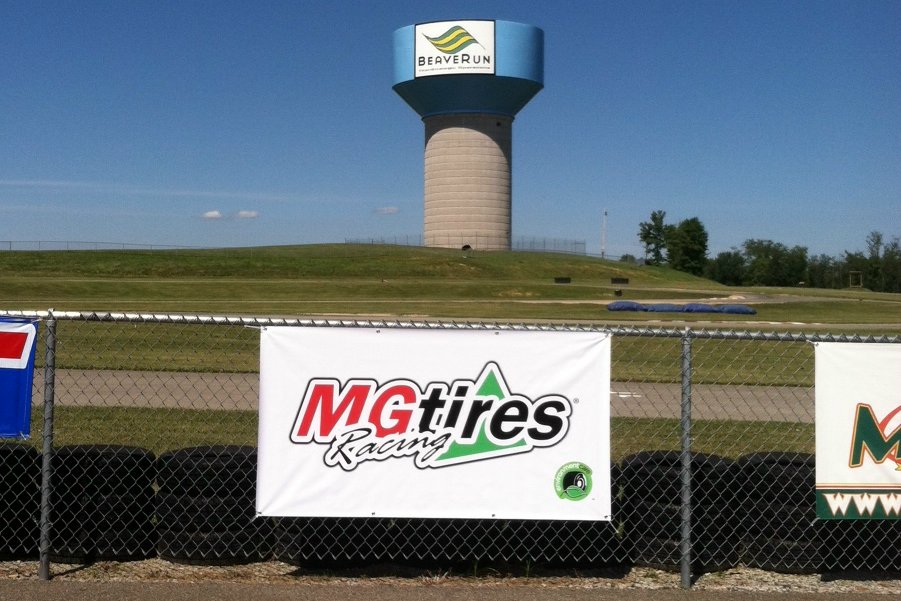 EKN’s Paddock Insider brings you notes, updates and breaking news as it happens. The article will be a timeline of events as they happen during the United States Pro Kart Series at the Pittsburgh International Race Complex in Wampum, PA. The information will not be seen anywhere else, including notes, interviews and photos. For complete coverage of the USPKC, visit the EKN Event Page. Please feel free to comment and discuss our coverage and today’s action in the EKN Global Members Discussion area below: 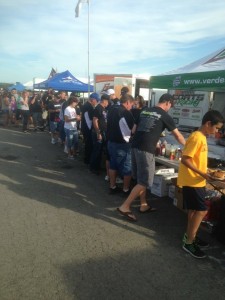 Record Numbers
Numbers are at an all-time high this weekend at the Pittsburgh International Race Complex – formerly known as the BeaveRun. The total for the eight categories is 151, which is the second highest in the six events thus far over the past year and a half. GoPro Motorplex was at 169, and when pre-registration closed last week, numbers were just over 100. The good word is spreading around the industry and through the community about the great atmosphere and tough competition at the USPKS. Word also spread quickly as hundreds lined up for the USPKS BBQ – sponsored by the Allegheny Karting Series – the local track program that was recently developed this year. A line was formed for over 90 minutes as 460 people were served pulled pork, chicken, corn on the cob, and plenty of sides to fill you up. With the season finale set for the popular New Castle Motorsports Park in just three weeks, numbers are sure to be near the same.

DeLong Father/Son Win Ladder Golf
During the Friday night dinner, USPKS and eKartingNews.com hosted a Ladder Golf tournament with 16 pairs taking part, made up of young and old racers, along with family members and parents. After a 16-team single elimination bracket was filled, the remaining two teams were Tony Jump/Scott Kopp against DeLong father/son duo. Jump/Kopp were rolling through teams like a train, but the pinpoint accuracy of the DeLong pairing was too much. They winning team took home two sets, with the runner-up taking one. Each pair will also receive some EKN Gear for their efforts. The second annual USPKS 3-on-3 basketball tournament is slated for New Castle next month, and people are asked to contact Rick Fulks for information. 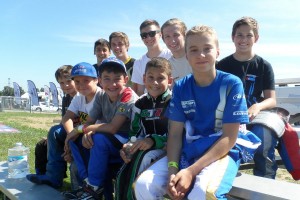 A handful of drivers are racing at the USPKS event after competing at the US Grand Nationals in Utah (Photo: EKN)

Back-to-Back Weekends
A handful of drivers here at the USPKS event just outside Pittsburgh were 1800 miles west at the 2014 Cold Stone US Grand Nationals to crown this year’s United States Rotax Max Challenge champions. One of them earned a title, and is in the hunt for two championship in the USPKS program. Dylan Tavella earned the Mini Max victory Sunday, and is currently in contention for the Yamaha Cadet and Mini Rok Cadet point standings. He, along with a few others, will also be in Modesto, California for the Superkarts! USA SummerNationals – the third leg on this three weekend EKN adventure. 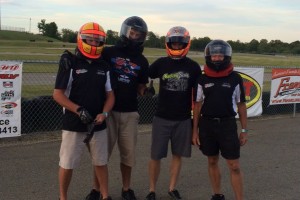 Officials Having Fun Too
Following the Happy Hour sessions and the Friday Night Dinner, a few of the USPKS staffers along with myself getting a chance to try out the Pitt Race Rental Karts. The Birel ‘Rock’ Karts are something familiar to many facilities around the country. and provide a great entry level program to get people into karting. Once walk-up participants were finished, Rick Fulks, announcer Tony LaPorta, and assistant race director Jim Fry went wheel-to-wheel. The money was on the lighter and ‘more experienced’ Fry, who led all six laps to beat out Fulks and myself. After three trips to the facility, it was my first laps around the circuit. After just one lap, I was dead tired. While it may look easy from the outside, it is the complete opposite. There is never a flat portion of the track, as you are either going up hill or down hill. The toughest and most popular passing areas are an increasing radius, down hill corner, where the exit point jumps up at you. Those drivers with a lot of laps around the course certainly have the advantage early on. There are at least six passing areas around the 8/10-mile course, which will make the racing action this weekend very exciting. 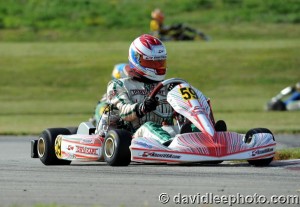 Happy Hour
Eight drivers left the track Friday afternoon with a positive result, ending the day as the quickest driver in the final session. Koene USA’s Elliot Finlayson (Tony Kart) slapped on some new MG Tires to help propel him to the top of the order in Leopard Pro. A 55.476-second lap was his best, clearing the field by two tenths of a second. Championship leader Kyle Kalish (Franklin Motorsports/Merlin) hit a curb and lost a chain during the opening laps. Jacob McWhirter (Tony Kart) set the bar in the Yamaha Pro division with a 1:01.170 lap, as point leader Brandon Jarsocrak (Haase) was fourth. Simon Sikes (FA Kart) was fastest in Yamaha Junior (1:00.088) while Matt Solarczyk (Birel) clocked in the quickest lap in Leopard Junior (56.328). Championship leader in both categories – David Malukas (Top Kart) was second in both. Parilla Challenge saw its field double from MRP to six, as Francois Brun-Wibaux dropped a flier on the final circuit of Happy Hour to put his Checkered Motorsport/PCR to the top spot. Lance Fenderson (Benik) was the top Cadet in both Yamaha and Mini Rok while Luca Mars (Praga) set the pace in Yamaha Rookie.