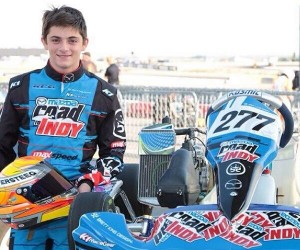 The last 12 months of training for rising karting star Austin Versteeg came down to one week of competition at this year’s Cold Stone US Grand Nationals. The United States Rotax Max Challenge national championship event was held on July 17-20 at the Miller Motorsports Park. Competing at his home track in Tooele, Utah was a slim advantage, as the best 47 drivers from across the country gathered for a chance to earn the coveted US Rotax title. The 15-year old battled through adversity on the opening day of action, showing the true poise and skills behind the wheel Versteeg has developed to this point in his career, fighting his way from the tail of the field to finish the event on the podium in the third position. It was the first trip to the award ceremony at the national championship, and solidified Austin as one of the top karters in America.

Taking to his home track quickly, Versteeg was among the quickest drivers throughout the unofficial practice sessions. Friday morning began with a warm-up session and qualifying to set the 47-driver field into their heat race groups. Versteeg piloted his Kosmic machine out of the pit-lane, and barely completed half a lap before a hub bolt snapped and dislodged his tire from the chassis. Without a timed lap, Versteeg found himself in the 47th position in the qualifying order, and set to start all three heat races from the 24th position.

“It was an unfortunate situation I found myself in after qualifying, after showing promise of recording a possible fast lap in the session all week long,” stated Versteeg. “The team was devastated, but I kept positive, knowing the only way to go was forward. The challenge of coming from the back allowed the pressure I felt going into the event to move away, and was filled with optimism.”

The opening heat race, Versteeg took advantage of a number of incidents in front of him, and was into the top-10 by the end of the first lap. From there, he posted the fast laps of the race to climb up to the fourth position in the first 10-lap heat race. The following day witnessed two more drives from the back. Heat #2 was another steady climb up the order, jumping into the top-15 early and picking off roughly one driver per lap to end up an impressive fifth. The third heat began with Versteeg going off course as the field made its way into the opening corner. Austin kept his Kosmic kart straight and rejoined with the field still in sight. Posting lap times similar to the leaders, Versteeg fought his way up to the eighth position. 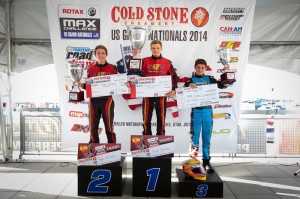 Versteeg climbed to the third step of the podium in the Junior Max division, standing alongside his Team USA teammates for the 2014 Rotax Grand Finals (Photo: Studio52.us)

Austin’s drive from the back helped to move him into the ninth starting spot for the Prefinal on Sunday morning. The inside line was favored throughout week, and was thought to be the right position for Versteeg as the race went green. Drivers just in front of him however made contact and Versteeg fought through the skirmish. He came out falling back to the 14th position. The kart was quicker with each lap, hooking up with Rolison Performance Group teammate Kyle Wick to end up eighth after 16 laps.

More opening lap issues arose at the beginning of the 20-lap main event to decide this year’s US Grand Nationals champion. Versteeg was affected and dropped back to the 15th position after the opening lap. Quick to react, Austin was into the top-10 and began hunting down for a spot in the top-five. The longer distance of the race allowed time for the Utah driver to settle into a pace, and reel off consistently fast times that matched the pace of the leaders. With seven laps remaining, Versteeg was into the fifth position and moved up another spot after contact removed one of the lead drivers. With a top-three finish in site, Austin hammered out more fast laps and caught the two drivers battling for the second position. A pass maneuver into the hairpin corner promoted him into the third spot, holding it all the way to the checkered flag.

“I couldn’t be happier with the outcome after what I went through to get here,” added Versteeg. “I love to be challenged, and the last three days were that. I especially need to thank Mike Rolison and the Rolison Performance Group enough for their effort, including the entire RPG family for supporting me during the week. My engineer Brian Fletcher who helped me get to this point, was unable to stay with us in Utah due to an illness, but without him, my team pulled together their resources so this result could be possible. Thank you also to Arie Ouimet for stepping in for Brian’s absence, as he did a phenomenal job preparing our Kosmic for each battle. And lastly, my family for all of their support and being there at the race track cheering me on.”

The 2014 Rotax Challenge of the Americas champion can now focus on preparing for this year’s Rotax Grand Finals, slated for the end of November in Valencia, Spain. It will be the first trip for Versteeg to the ‘Olympics of Karting’ where he will compete against drivers from over 60 countries in an effort to earn a world Rotax title. Up first, Austin travels to the Superkarts! USA SummerNationals at the Modesto Grand Prix in northern California on August 1-3, set to continue his S5 Junior Stock Moto championship campaign. Visit www.austinversteeg.com for more information and to follow his path during the rest of the year.