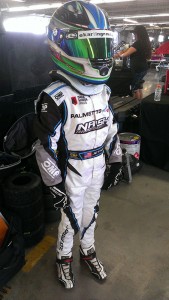 Jetpak Jak Crawford had the speed to run upfront all weekend long but an incident in the final, ruined his chances at a victory (Photo: Jak Crawford Racing)

As had been the case at the Rotax Summer Shootout, ‘Jetpak’ Jak Crawford’s National Championship campaign started with utter domination.  This time at Miller Motorsports Park in Tooele, Utah, however, it ended in being run-off the track in a desert dust-up on Championship Sunday.  As has been the case all season long in his debut Micro Max year, Jak has had to contend with diversity and fight his way forward.  After winning pole on Friday by over half a second and crossing the line first for all three heat races, Jak’s weekend started to go the wrong way.

There was a problem in the tech barn after the last heat on Saturday that would send Jak to a ninth place starting position for Sunday’s prefinal race.  Not to slow him down, it served as fuel for ‘Jetpak’ and only took a few laps for him to find his spot at the front of the Micro Max pack.  Jak finished the prefinal event in second place on the all-Texas driver represented front row for the main event.

The final would start well enough as Jak gridded on the outside and slotted himself in third position after the first corner.  On the second lap, the second place driver didn’t carry his speed out of turn one and Jak had to make a pass on the outside.  That same driver pushed over in Jak’s lane and sent Jak off the track scattering up a cloud of dust in the infield.  Jak’s chance at the championship was over with barely one lap completed as he found himself 20 kart lengths or more behind the last place driver and a quarter lap away from the lead pack.

Never a quitter on the racetrack, the just turned nine-year-old racer worked hard to the end to finish fifth and with one more lap would have probably been on the podium in second or third. In spite of broken kart parts dangling and a front end that would only turn well in one direction, ‘Jetpak’ Jak set the fast lap for the final race and his chance at Championship domination blew away with the desert wind.

Jak’s dad and tuner went on to say, “Jak is a fighter when the chips are down and they were down for him on Sunday morning from ninth position. He was so dominant all week and during the Shootout, and really all year so far, that we felt there was a tech witch-hunt for us all week and they finally found something minor which was turned into a major issue even confiscating our pipe and manifold. The fact Jak went out and turned the fastest laps again in all sessions on Sunday proves the over-reaction on Rotax’s part.”

Jak wishes to congratulate the #58 on the win, and his buddies piloting the #14 and the #55 for their podium positions.  Jak also wishes to thank Chris Freckleton of Precision Motorworks for his exceptional engines and Seth Nash of Nash Motorsportz for his engineering excellence.   Both Freckleton and Nash were key components to Jak’s unbelievable first seven months of major Rotax competition.

After it was announced that the 2015 USA Rotax Grand Nationals will be held at Carolina Motorsports Park (CMP), Jak will once again contend for a Micro Max championship next year. Feeling that CMP is much more of a driver’s track than an engine or drafting track like the Star Trek configuration at MMP, Jak feels like he can do well a year from now, even with his height which is becoming a disadvantage on certain long track configurations.   While Jak might jump into a Mini Max for non Rotax Max Challenge races, his main emphasis for the remainder of 2014 and hallway thru 2015 will be in the Micro Max category.

For more information on ‘Jetpak’ Jak, or to place sponsorship or calendar inquiries, please contact Nikki Crawford at nikocraw@gmail.com. Also, be sure to like ‘Jetpak’ Jak Crawford on his new Facebook page at www.facebook.com/jetpakjakcrawford.