New tracks and competitive fields give Benyahia a different perspective 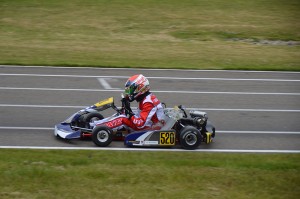 Michael Benyahia recently returned home from several weeks spent racing in Europe. The young American driver participated in CIK-FIA’s Academy Trophy competition at tracks throughout the region including Genk, Belgium; Sarno, Italy; Sienna, Italy; and Wackersdorf, Germany. While Benyahia did not achieve any podium finishes throughout his time in Europe, the experience made the trip worth his valuable time. In Europe, Michael learned the ins and outs of the very different European racing style, and how to decipher the many technical courses that Europe has to offer.

“I’m very thankful to have had the opportunity to race in Europe this season,” expressed Michael. “I’m hoping to continue improving myself and to grab a podium finish at the last Academy race in October in Sarno, Italy.”

Michael Benyahia’s most recent competition was in Wackersdorf, Germany, for round two of the Academy series. The weekend went mostly well, despite the fact that a new bumper system caused problems. For the young driver, the system was too sensitive and dropped very easily to the ground. In the weekend’s prefinal race, the bumper system dropped when Michael on the eighth lap, and in turn he received a mechanical error flag and was forced to come off track to fix the problem, leaving him inevitably near the tail of the field. Similar problems occurred in the final, and once again Michael was not able to finish in a decent position.

“Despite my mechanical issues, I still really appreciated the whole European racing experience,” Michael continued. “I made so many new friends from different places, and learned so much in so little time.”

Benyahia will be returning to Europe in fall of 2014 to compete again, with hopes of ever-improving results. Michael would like to thank his parents and family for their support, Zagar Corse, Parolin chassis, MIR and FIM Motors and the CIK-FIA organization for putting on great events.