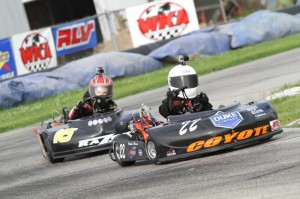 Coyote racers from around the eastern half of the country traveled to southwest Ohio the weekend after Fourth of July for the second round of the World Karting Association Gold Cup Series at the historic G&J Kartway in Camden.

Two Coyote drivers netted wins at G&J, where over 200 entries made it another strong turnout for the Gold Cup.

The highlight of the weekend came Saturday when youngster Blake Boon raced his Coyote Kriptonite to his first-ever national win in the LO206 Kid Kart division. Blake out-raced three other competitors for his first Gold Cup triumph in his third event in the series. Boon made his series debut at the 2013 season-closer last October at Carolina Motorsports Park.