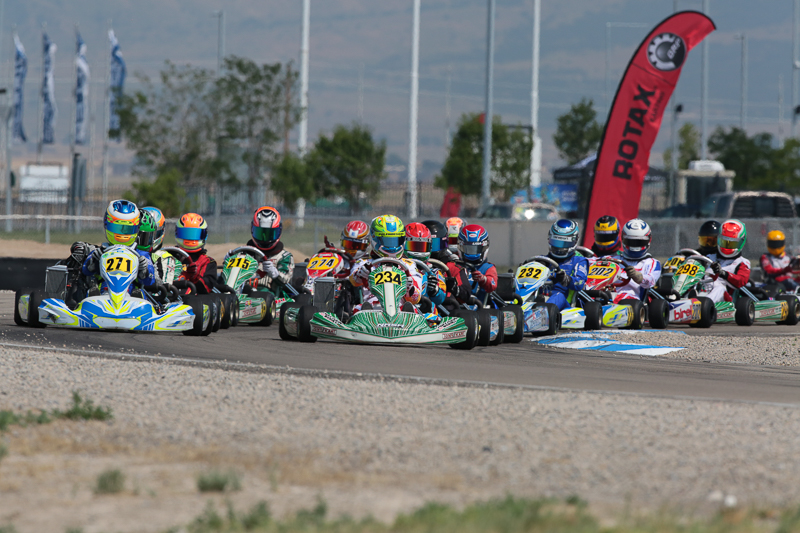 For complete coverage of the 2014 Cold Stone US Grand Nationals, visit the EKN Event Page

Be sure to post your comments below in the EKN Global Members Discussion section – Ed.The first true test for the possible 2014 Cold Stone US Grand Nationals champions began Friday with the qualifying and the opening heat race for the seven United States Rotax Max Challenge categories. Nearly 200 drivers took to the Miller Motorsports Park on a hot and sunny day in Tooele, Utah, keeping in mind that today is only the start. Two more full days of racing still remain, with the eye on the prize for Championship Sunday. 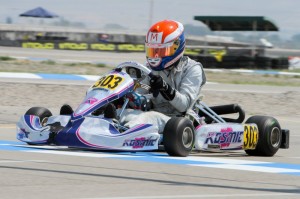 Ocala Gran Prix Senior Max
Thirty-five drivers filled out the Senior Max field, with drama unfolding before they took the track. Defending champion Oliver Askew (Tony Kart) announced he would sit out with a possible back issue. Originally, Nick Neri was slatted to fill the seat and compete in both categories, however, the Ocala Gran Prix team elected to hold Askew’s position in the field. After a trip to the hospital, he spent the rest of the day visiting with a specialists to find out his options – but never hit the track. On-track, it was Rotax veteran Louie Pagano that led the way in the qualifying session. A 58.373-second lap in his Dallas Karting Complex Sodi Kart secured the final spot in the Koene USA SuperPole session. Jamaican Thomas Issa (Kosmic) was second with fellow Senior rookie Luke Selliken (Kosmic) in third. California driver Mason Marotta (Tony Kart), Jake Craig (Tony Kart) and Dan Roeper (Birel) completed the top-six moving on to the SuperPole. Positions changed, with Issa moving to the top spot. Top qualifier Pagano suffered a fuel supply issue that limited his pace, costing him a shot at retaining the top position. That dropped Pagano to fourth in the order, as Marotta went from fourth to second. Selliken remained third while Roeper was provisionally fifth, however, had his fast lap taken away for an infraction, moving Craig to fifth. 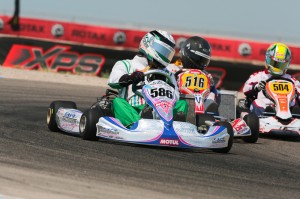 Issa and Marotta led the field to the green for the opening heat race, as the field was able to get through the opening laps clean. Selliken muscled his way into the second spot on the opening lap, with Pagano and Craig filling out the top-five. Just one more lap later, and the Rotax Summer Shootout winner Selliken was into the lead. With consistent lap times, he stretched out to a lead of 1.6 seconds after 10 laps. After losing the lead, Issa began to fall and eventually ended up in the sixth position. Marotta moved to second while Craig jumped ahead of Pagano for third. The fast driver of the race was another Senior Max rookie, Kyle Kirkwood. The Ocala Gran Prix/Tony Kart driver came from eighth in the order to end up fifth. 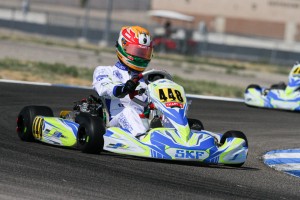 The opening heat race was a three driver battle in both classes. Bressan was in command during the entire 10 laps, with Neri and Kotyk in his tracks. They kept the pressure on early, but shuffling by the two OGP drivers allowed the J3 Competition driver to score the win by two seconds. Kotyk came away with second with Neri in third. Adds was shuffled back at the start with Reichelt leading a train of drivers in fourth with two-time DD2 Masters champion Alan Rudolph (CRG) up to fifth from ninth. Musser joined the front row drivers in the Masters group, as Jackson set the pace. They along with Jones shuffled it up for a number of laps, with Jackson edging out Jones at the stripe by 78 thousandths for the win.

Can-Am Karting Challenge Junior Max
Forty-seven drivers filled out the field for the Junior Max division, split up by two groups. The second group was the quickest from practice, with Luis Jose Forteza (Kosmic) securing the fast time. Sting Ray Robb (Tony Kart) was second with Christian Brooks (Tony Kart). Anthony Gangi Jr. (Tony Kart), Kyle Wick (Kosmic) and Braden Eves (Tony Kart) making up the top-six in the session, and moving on to the Koene USA SuperPole session. The Junior session saw some movement among the top-six, with Robb moving up one position to secure the pole position for the three heat races. That dropped top qualifier Forteza to second. Gangi Jr. moved up to third, dropping Brooks to fourth. Eves moved to fifth and Wick to sixth. 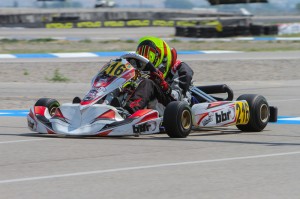 Robb led the field to the green flag for the opening heat race that included Groups A and C. Contact through a number of the corners shuffled up the field, allowing Trenton Estep (Tony Kart) to come away with the lead, as SuperPole winner Robb fell to fourth. The top three of Estep, Gangi, and Austin Garrison (Tony Kart) broke away to settle who would win the 10-lap event. Gangi triumphed, crossing the line first over Estep and Garrison. The drive of the race went to Austin Versteeg (Kosmic). The Utah native made zero laps after a snap hub bolt sent his Mojo tire flying off his machine. Starting 24th, he made quick work with all the contact in front of him on the opening lap, moving into the top-10. Fast laps of the race allowed him to work up further in the order, ending up an impressive fourth to push Robb back to fifth.

Another three driver group formed in the B versus D heat race, as Forteza, Brooks and Patricio O’Ward (FA Kart) led the way. O’Ward appeared to be the one looking to move early, and was into second by lap two, and putting the pressure on the top qualifier. The Texan’s pace however slowed on lap five, as he suffered a punctured right rear tire and pulled off on lap six. That left Forteza to fend off Brooks, crossing the line first by eight tenths. The win was taken away from Forteza in technical inspection, with an issue with his ignition. He was demoted to finish sixth, giving Brooks the win. Ryan Norberg (Tony Kart) qualified 18th overall, and fought his way to an impressive second place result. Mayo Livingston (Tony Kart) was third, with Christian Munoz (Tony Kart) and Chase Acklam (Tony Kart) completing the top-five. 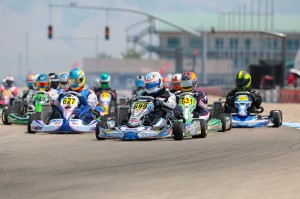 Scott Falcone is leading the Masters Max field to the green each session after posting fast time in qualifying (Photo: Ken Johnson – Studio52.us)

Full Throttle Karting Masters Max
Like a man on a mission, Colorado driver Scott Falcone put his Arrow machine on the pole position in Masters Max qualifying. A member of Team USA after placing runner-up in DD2 Masters at the Florida Winter Tour, the KartSport North America driver is gunning for a win or nothing else. His second lap was a 1:00.192 to secure the top spot in the session, edging out Utah driver Ken Maxfield by a scant five thousandths of a second. It was a 1-2 Arrow result, with Tony Kart chassis completing the fast five that including Tyler Brooks, John Crow and Scott Roberts.

The two Arrow karts led the way to the green flag, with Falcone blasting away with the led. Maxfield was shuffled back to fifth on the opening circuit, as the top five broke away. Falcone held a sizable lead but the eyes were on Maxfield. The quickest kart on the track, he steadily found himself into second, and ran down Falcone. On lap eight, Maxfield took the lead at the hairpin, and fought off a last lap charge by Falcone for the win. Roberts and Crow dropped Brooks to the fifth spot, with Andy Seesemann (Birel) up to sixth after starting 10th. 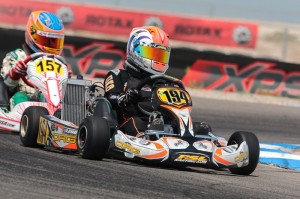 Chase Racing Mini Max
Forty-five drivers filled up the Mini Max qualifying session, all looking to post the fast lap of the race. Texas driver Sebastian Alvarez laid down the quickest of the session, a 1:03.346, which was better by nearly three tenths on the rest of the field. The d’Orlando brothers of Michael and Nicholas worked together in the session to put their Tony Kart entries into second and third. Florida driver Lachlan DeFrancesco (Benik) was fourth with last year’s Micro Max champion Dylan Tavella (Tony Kart) completing the fast five.

Top qualifier Alvarez went wire-to-wire in the opening heat race which featured Group A versus C. Early on, he drove away but Nicholas d’Orlando was able to reel him in by lap three. They ran nose-to-tail the remainder of the race that way, with Nicholas trying a few times to take over the lead. At the line, it was just 74 thousandths of a second that separated the top two. Riley Dickinson (Tony Kart) won the fight for third with GoRotax.com Driver of the Month for June Kaylen Frederick (Tony Kart) fourth with last year’s Mini Max runner-up Enzo Fittipaldi (Tony Kart) in fifth. Tavella went off at the exit of the bus stop, and pulled off after one lap when he rejoined at the back of the field.

Michael d’Orlando and David Morales (Benik) broke away to settle the win for the B versus D heat race. The defending champ put his Koene USA entry out front, with Morales waiting until lap six to make his move. D’Orlando responded a few corners later, taking back the position and held on to the checkered flag. Morales was second with DeFrancesco fighting his way back to third after dropping back. Trey Brown (Tony Kart) and Alex Verhagen (Arrow) completed the top-five, but the final result was swapped after Brown was handed a two position penalty for contact. 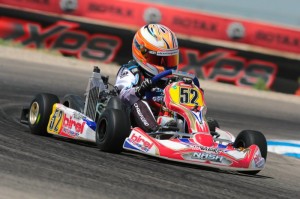 Nash Motorspotz/Precision Works Micro Max
As he shown all season, Texan driver Jak Crawford (Birel) laid down a monster lap to secure the pole position. A lap time of 1:06.952 by the Rotax Challenge of the Americas champion cleared the field by over a half-second, making a few passes and getting a great draft to lock in the top spot. Ethan Arndt (Tony Kart) made it a Texas 1-2 with Diego LaRouqe (Kosmic) and Jonathon Portz (Kosmic) all within a tenth of each other. Florida Winter Tour champion Reece Gold (Tony Kart) rounded out the fast five.

Crawford jumped out in the lead early and never looked back. The top qualifier drove away to a three-second advantage to open up the event perfect. It was a shuffle for the spots behind him, with Tyler Maxson (Tony Kart) coming up to second from eighth. Chase Heffner (Benik) drove to third after starting sixth. Cooper Becklin (FA Kart) and Ugo Ugochukwu (Tony Kart) also moved into the top-five, with Ugochukwu the biggest gainer after starting 12th.