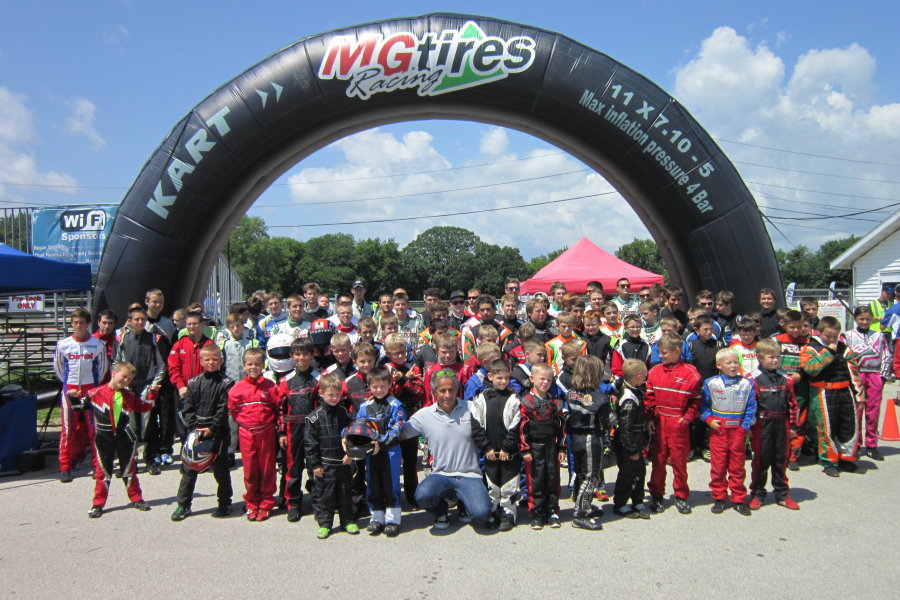 The MG Tire / L & T Manufacturing Route 66 Sprint Series held rounds five and six at the Briggs & Stratton Raceway Park near Dousman, WI on July 12-13 with another large turnout of over 300 entries.  The event was sponsored by QPS Employment Group and hosted by the Badger Kart Club (BKC). Rain was predicted for Saturday and it held off until the 7th final of the day when the Leopard Senior class had to mount up their rain tires.  Several drivers were able to capture multiple wins over the weekend. Brandon Lemke won both Leopard Junior finals and the Sunday Yamaha Junior final.  Mason Maine won the Yamaha Rookie final on both days.  And Austin Schaff captured both Yamaha Cadet finals over the weekend. 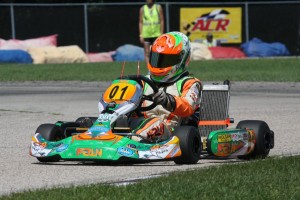 The series was lucky enough to have Wagner Rossi from MG Tires/Brazil drop by on Sunday and check out the event at BKC.  All the drivers and even the series officials got in on the act posing for photos with Wagner. Wagner was gracious enough to answer a few questions about MG Tires and share how important the racer feedback is to the company.  Wagner then roamed the pits for a while to get feedback from the drivers about their tires.

The growth of this series continues as evidenced by the very full pits on Thursday afternoon prior to the Friday practice day.  The hosting Badger Kart Club handled the crowds with ease as they have a much experience at running big events at their track. BKC once again hosted their free cookout after the races on Saturday with a fried chicken and Italian meat balls dinner.  BKC also provided beautiful eagle trophies along with their famous cheese cows awarded to the top five in each class. A softball game scheduled for the end of the day Saturday in the race track infield was cancelled due to the rain.

On Saturday morning, four drivers won a free set of MG tires in a drawing held at the driver’s meeting.  MG Tire sets were won by Christian Besasie, Stephen Dial, Brandon Lemke and Cohle Santiago.  PKT gift certificates were also given away by drawing to five drivers.

The first final racing both days was the Haddock Limited/Comet Kart Sales Komet class.  Ryan Weyer (Merlin) set quick time in qualifying on both days and won both pre-finals.  He pulled away by 2.5 seconds for the win on Saturday over Kyle Gluth. On Sunday, contact on lap five took him out of contention handing the win to Christian Besasie (Merlin).  On Saturday, Besasie, Joe Adler and TJ Nevels rounded out the top five.  On Sunday, Joe Adler, Jeremy Roche, Cooper Horn and Roman Padens finished in the top five. 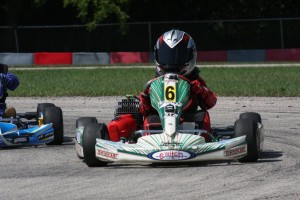 The Hollywood Crane Service Kid Kart class was racing next where Pierce Sonderup set fast qualifying time both days.  Dylan Julien won the pre-final on Saturday and Sonderup won the Sunday pre-final.  Sonderup won the final on Saturday by just .151 seconds over Elliot Cox with Julien, Charlie Kremer and Adam Brickley rounding out the top five.  On Sunday, Julien (Merlin) pulled away to a huge 11 second lead to take the final over Cox, Kremer, Maxim Mabee and Brickley in the top five.

The next class racing was the Haddock Limited/Express Karts & Parts Komet Cadet class.  On Saturday, Alex Bertagnoli (Merlin) swept the day by setting fast time and winning the pre-final and final.  Sam Mayer followed Bertagnoli to finish a close second followed by Austin Schaff, Stephen Dial and Spike Kohlbecker in the top five.  The Saturday final got off to a rough start when Michael Paterno and Emery Waldron got together and ended up crashing into the pillow bags at the end of the front straight on lap 10. Both drivers were not injured.  Sam Mayer (Merlin) would sweep the day on Sunday setting fast time and winning the pre-final and final.  The front pack had a tight battle with Bertagnoli finishing second followed by Schaff, Connor Cass and Dial.  Spike Kohlbecker ended up in the front straight crash pillows on lap four taking him out of contention.

The next class racing was the RLV Yamaha 100 Senior class with large fields of 26 entries.  Collin Griffin captured the fast qualifying awards on both Saturday and Sunday. Pre-final wins went to Nick Stagl on Saturday and new comer Dan Corcoran on Sunday.  Stagl (Tony Kart) held off Griffin for the win on Saturday followed closely by Kyle Gluth, Ben Hewitt and Robby McQuinn in the top five. On Sunday Dan Corcoran (Margay) battled his way to the win over Gluth, Griffin, McQuinn and Kyle Prokup who finished in the top five. 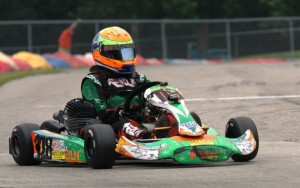 The CKT Leopard 125 Junior class was up next.  Brandon Basela set fast qualifying time on Saturday however Brandon Lemke (Merlin) would take the pre-final and final wins pulling away to a five second lead over Dillon Schwanbeck, Emily Hurlbert, Max Nufer and Michael Rutter.  On Sunday Lemke would sweep the day by setting fast time and taking both the pre-final and final wins.  Hurlbert, Max Nufer, Nicholas Nufer and Schwanbeck finished in the top five on Sunday.

The next class racing was the Triple E Sales Yamaha 100 Rookie class with 15 entries.  Taylor Maas set quick time and won the pre-final on Saturday however would fail post-tech handing the win to Mason Maine (Tony Kart). Conner Churchill, Lucas Smalec, Mason Santiago and Cameron Christ rounded out the top five on Saturday.  On Sunday Taylor Mass would again set fast qualifying time however it was Mason Maine (Tony Kart) taking the pre-final and final wins by just .204 seconds over Mass. Conner Churchill, Keegan Bosch and Lucas Smalec finished in the top five on Sunday.

The Franklin Motorsports Leopard 125 Senior class staged next with large fields of 26 entries on each day.  Six different drivers claimed fast times, pre-final wins and final wins over the two days in this very competitive class.  On Saturday, before the rain started, Michael Gerringer set the fast qualifying time and Kyle Kalish won the pre-final.  As the class was doing their warmup laps for the final, rain began to fall and the race was red-flagged to switch to rain tires.  Andrick Zeen (Praga) mastered the rain on Saturday as he pulled away to a 7.478 second win over Gerringer with Darin Marcus, Kalish and Troy Hottmann rounding out the top five.  On Sunday Tommy Anderson set fast qualifying time and Armin Cavkusic won the pre-final.  In the finals, Colton Ramsey (Tony Kart) took the lead on lap one from his third starting position and never relinquished it taking the victory by .392 seconds over Anderson.  Josh Hotz, Kindra Hurlbert and Darin Marcus finished in the top five. 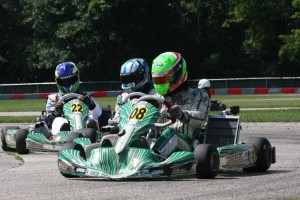 The Yamaha 100 Junior class sponsored by Woltjer Racing Engines was up next.  On Saturday, Mike McAndrews set the fast qualifying time and Dillon Schwanbeck won the pre-final under dry conditions. The Saturday final competed in rain conditions with Becker Reardon (Tony Kart) pulling away to a big 10 second win over Brandon Lemke, Brant Carter, Schwanbeck and McAndrews. On Sunday, Brandon Lemke (Merlin) swept the day taking fast time, pre-final and final wins.  McAndrews and Schwanbeck followed Lemke closely at the finish. Becker Reardon and Ryan Weyer rounded out the top five on Sunday.

The Briggs and Stratton LO-206 class staged next under rain conditions on Saturday.  Jeremy Roche set quick time and won the pre-final on Saturday however Matthew Bartling  (Birel) would pull away to a 11.5 second win in the wet final over Roche.  Brandon Klein, AJ Collins and Robert Bromberek finished in the top five on Saturday.  On Sunday Bartling claimed fast qualifying time but Jeremy Roche (Merlin) would take the pre-final and final wins.  AJ Collins, Brandon Klein and Mike Riemer rounded out the top five on Sunday.

The Switch Racing EnginesYamaha 100 Cadet class was the last class racing  with a big field of 18 entries.  Austin Schaff (Merlin) would sweep the class on Saturday taking fast time and winning both the pre-final and final.  Sam Mayer finished a close second on Saturday with Alex Bertagnoli, Aidan Harrington and Maks Kowalski finishing in the top five in wet conditions.  On Sunday, Austin Schaff qualified on pole and Bertagnoli took the pre-final win.  In the Sunday final, Bertagnoli was knocked off the track on the final lap giving the win to Schaff (Merlin).  Connor Cass, Greg Della and Stephen Dial rounded out the top five. 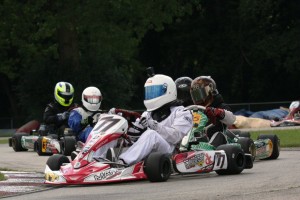 Merlin chassis captured the most final wins over the weekend with 11 victories as this is the home track for many of the Franklin Motorsports Merlin competitors. Tony Kart was next with five wins.  Birel, Margay and Praga each had one victory.