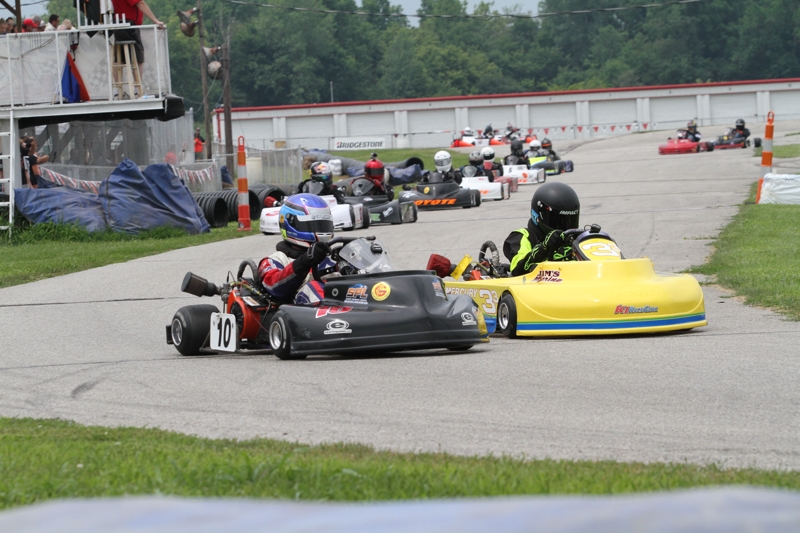 Maryland‘s Jacob Heavlow was the only driver who gave Lawson a consistent challenge. Heavlow, a multi-time WKA Junior national champion, led a number of laps in Friday’ Money Race before Lawson bested him by 0.7-second margin. The pair traded paint a few times in an exciting race that saw Scott Kleman, Dustin Demattia and Jim Lipari finish third through fifth.

Heavlow almost had Lawson beat in Saturday’s Coyote Motorsports Pro Gas Animal final. Heavlow and Lawson swapped the lead several times until the final lap when the pair touched once again while racing for the win. Lawson took the advantage onto the final straightaway when his chain fell off as he crossed the finish line for the checkered flag. Demattia, Tanner Lee and Kleman filled the top five.

Heavlow qualified second to Lawson in Sunday’s Pro Gas Animal class but was bounced in fuel tech. Having to start from the rear in heat race, Heavlow made it to the top 10 in the 20-kart field, and advanced to second in the feature. Lawson won by another convincing margin.

Lawson pocketed over $2,000 for winning the four races. Heavlow, Demattia, Lee, Kleman, Lipari, Mincey, Skaggs, Josh Stiefel and Mike Greiner all left with Jacksonville with a piece of more than $3,000 in purses that were posted for the event.

Maryland racers Matt Miller and Jason Alder each scored the hat trick at Camden. Both drivers won three times in the Junior Sportsman category, besting competitive fields of talented 8- to 12-year-old racers throughout the weekend.

Hall crossed the finish line first in Saturday’s Sportsman Pro Gas Heavy main, but was docked a one-position penalty for offending another kart. Hall was penalized to second, giving the win the Miller, with Alder fourth, Vrabel fourth and Nick Fauci fifth.

Miller edged Hall in Sunday’s Sportsman Pro Gas Heavy weekend capper. Hall tried everything he could to pass the Margay driver but came up just short.

Alder’s most competitive triumph came in Sunday’s Sportsman Pro Gas Lite 2. The Maryland racer and Hall made contact in the final corners while battling for the lead. Alder made the inside pass while touching Hall, but there was no penalty and Alder became the only driver to win a Sportsman Pro Gas final other than Miller.

Lee won going away in Saturday’s contest, crossing the stripe four seconds ahead of Headley. Cayla Chapman was third.

Sunday’ Animal Medium race was an exciting one between Tyler Sandmeyer, Jimmy Heavlow and Jim Lipari. Sandmeyer and Heavlow ended up taking each other out and Lipari’s retired early with engine problems. Justin Funkhouser ran well but him and Chapman made contact, sending Funkhouser into the fence in turn two.

Lee won Saturday’s Power Plus Lubricants feature. Lee again won over Headley, but this time by only a 0.253-second margin. Tim Stiefel ran a strong race for third.

Josh Stiefel, who ran strong all weekend in Senior Pro Gas and Animal Heavy, raced to a competitive win in Sunday’s CKI Animal Heavy Mix main over Headley. The New York Coyote racer made a late-race pass on Headley to score the win.

Click HERE for MyLaps results from this past weekend.

Next up for the Gold Cup is the August 15-17 Van-K Wheels / MGM Chassis Nationals at Michiana Raceway Park in South Bend, Indiana. Click HERE for the event entry form.