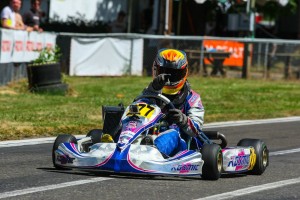 Young motorsport talent Austin Versteeg has been busy during the first few months of the 2014 summer season. The 2014 Rotax Challenge of the Americas champion has been spending the break from school to hit as many races as possible. While Versteeg is gaining seat time in preparation for the 2014 Cold Stone United States Rotax Grand Nationals, Austin has also been racking up wins. The first half of the summer has seen Versteeg compete in two Rotax Can-Am ProKart Challenge weekends along with the Rotax Summer Shootout at Miller Motorsports Park. Over the three weekends of racing, Versteeg tallied five victories, two runner-up results and a third place finish in eight races.

Versteeg’s busy summer began with a weekend of racing in the Junior Max class at Rotax Can-Am ProKart Challenge on May 30-June 1 at the McMinnville Kart Track in northwestern Oregon. Austin joined the rest of his Rolison Performance Group team at the 6/10-mile long circuit known to most as the ‘Mac Track’. The weekend was a strong one for Versteeg. Saturday saw him spend the day constantly improving. After qualifying fifth quickest, Austin drove to a third place finish in the Prefinal, before ending the day with a second place result in the Final. Sunday faired just as well, with better results early. After missing out on the pole position by a tenth of a second in qualifying, Austin looked great in the Prefinal as he grabbed the win. Versteeg however settled for the second position, keeping himself in the lead of the championship standings.

From McMinnville, Versteeg returned home to compete in the Rotax Summer Shootout at Miller Motorsports Park in Tooele, Utah the weekend of June 27-29. The event served as the official tune up race for the 2014 Cold Stone US Rotax Grand Nationals, with plenty of ‘Rotaxian’ drivers and teams taking part in the event. Not many drivers know the fast and technical layout of MMP as well as Versteeg, and he proved that over the weekend. Austin showed great speed to start the weekend, ending Friday’s final timed session as the fourth quickest driver in a very large Junior Max field which featured 32 drivers. The first race day was an up and down one for Versteeg after he started off by qualifying third quickest. A rough start in the Prefinal saw him fall to the 10th place, but his grit and determination saw him rebound to an impressive third place in the main event. Austin built on his podium run from the day before and showed the way Sunday in qualifying, laying down the fast lap of the session by five hundredths of a second. Versteeg led the Prefinal flag-to-flag, picking up the win and survived a wild last lap that saw him fend off challenges from four other drivers to secure the feature victory. 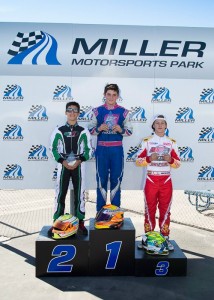 Austin looks to return to the top step of the podium at Miller Motorsports Park next weekend, looking to claim his first US Rotax Grand Nationals title (Photo: Ken Johnson – Studio52.us)

Taking just enough time to enjoy the win at the Summer Shootout, Versteeg packed his bags again and boarded a plane to Oregon for the Fourth of July weekend race at Pat’s Acres Racing Complex for the next round of races toward the Rotax Can-Am ProKart Challenge. Tucked away in the town of Canby, Oregon, PARK is a historic karting facility that will test any driver’s ability and skill. Versteeg passed the test with flying colors as he pulled doubled duty on the weekend, continuing his chase for the Junior Max crown and gained some time in his S5 Junior Stock Moto machine. Versteeg started the weekend with the second quickest lap in Junior Max qualifying, but losing a spot in the Prefinal to finish third. Seven laps into the main event, Austin took the lead away drove on to score his third victory of the year in the series. Domination was the word of the day on Sunday. From qualifying through the main event, no one could match the pace set by Versteeg as he swept the day and left with back-to-back main event wins on the weekend. Austin added two more first place trophies by winning the S5 category both days, gearing up for the upcoming Superkarts! USA Pro Tour SummerNationals at the Modesto Grand Prix on August 1-3 in northern California.

Versteeg for now will keep all his focus on the upcoming 2014 Cold Stone United States Rotax Max Grand Nationals at his home track, the Miller Motorsports Park. Versteeg finished fourth in the Mini Max division during the 2011 edition of the Grand Nationals, the last time it was held in Tooele. After two years of working his way up the ranks of the Junior division, Austin is in position to contend for the US title this year. Visit www.austinversteeg.com for more information and to follow his path during the rest of the year.