Leopard Pro bonus increased to $1,000 for a double winner at the Pittsburgh International Race Complex event

The United States Pro Kart Series reached the halfway point of the 2014 season, following the second event of the year at the Michiana Raceway Park in North Liberty, Indiana. The June 20-22 weekend provided another near-record turnout as the eight TaG and Yamaha categories battled for Round Three and Four victories, inching closer to the final stages of the eight-round championship chase. The next step for those looking to claim USPKS hardware and a piece of the enormous prize package at the end of the year is Round Five and Six at the Pittsburgh International Race Complex in Wampum, Pennsylvania on July 25-27, presented by Checkered Motorsports and Zero Error Racing.

The MRP weekend witnessed two different winners in the Franklin Motorsports Leopard Pro division as Michael Geringer and AJ Myers each took home $1,000 for their win. With no double winner on the weekend, the $500 bonus is carried over to the PIRC weekend, offering up a $1,000 check – presented by DRT Racing – to any driver that can win both feature races. It could be a nice cool $3k payday for one lucky driver, as the opening event of the 2014 season saw Roger Ralston Jr. win both races, earning a nice $2,500 pay day for the weekend.

The Pre-Entry deadline for the upcoming Pittsburgh round of the United States Pro Kart Series is set for July 18 at 11:59pm (CDT) on MotorsportReg.com. Drivers looking for an opportunity to get some extra practice before the USPKS weekend can take part in the Allegheny Karting Series on July 19-20. The Pittsburgh International Race Complex club series is hosting a two-round event on the weekend prior to the USPKS event, offering categories for Yamaha and Leopard competitors on the standard MG Tire compound. Head to AlleghenyKartingSeries.com to find out more information. USPKS would like to remind competitors of the no testing policy during the week of the event (Monday through Thursday) until official practice begins Friday, July 25. Back my popular demand will be the helmet trophies that were presented at the opening rounds in Mooresville, with the top-five finishers in each category on both days receiving an award. 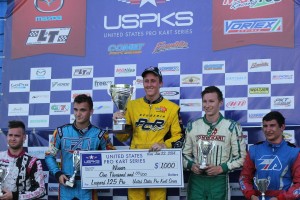 The Leopard Pro bonus for winning both events at the Pittsburgh round will increase to $1,000 – added to the already $1,000 to win each day

The weekend at Michiana Raceway Park – presented by Verde Speed Resource and freem USA – featured more drivers taking home money for their efforts on the weekend. Comet Racing Engines Yamaha Pro saw Brandon Jarsocrak earn the most points on the weekend for a second straight event, taking home another $1,000 check. Derek Dignan was second and won $500 with Sunday feature winner Tony Jump taking $250 for his third place effort on the total weekend points. Zach Holden was shut out in the win column, but moved to the top of the Woltjer Racing Engines Yamaha Junior championship chase and earned the most points over the weekend, bagging $500 while Sunday winner Brandon Lemke was second, taking home $250. Double GT7 Motorsports Leopard Junior winner Mike McAndrews locked up the $500 payday, with David Malukas second overall. Alex Bertagnoli and Alex Verhagen bested the Orlando Kart Center Mini Rok Cadet field to take the money, with Austin Schaff and Sam Mayer doing the same in the QPS Employment Group Yamaha Cadet division.

Mark Coats, series promoter for the United States Pro Kart Series, announced at the end of June that the series will continue to utilize the Parilla Leopard, Yamaha KT100, and Vortex Mini Rok engines for 2015. “It’s hard to argue with success, and that is why we are leaving the engines alone for the 2015 season. We all know that single engine classes are the way to go, and that is what our racers want.”

The Leopard Pro and Leopard Junior categories will remain unchanged, as will the Mini Rok Cadet division. The Yamaha Pro and Yamaha Junior are set for return in 2015 with Yamaha Cadet and Yamaha Rookie racers back next year. Changes for the 2015 season will be the removal of the Parilla Challenge division, with some possible adjustments coming in the near future with the goal of making it a seven classes championship next season. The Yamaha Junior divisions will also see the rear tires move to a 7.10 size, up from 6.0 in 2014, to match the same size for the Leopard Junior.

“A stable rule and class structure has lacked in karting for many years,” continued Coats. “We at the USPKS are trying to lock in a rules package for several years in advance. This way the manufacturer, the shops and the racers know our intensions. The MG Tire is a great product and has brought a level playing field to the series, and we are currently working to extend our contract for the USPKS and the Route 66 Sprint Series programs.” Coats is also working on the 2015 schedule, and hopes to have it released within the next 60 days.