EKN will once again be providing the popular Trackside coverage. Be sure to follow the Official Discussion Thread for top-10 results of every on-track session as the event unfolds, and follow all the coverage through the EKN Event Page. Also, get updates through Facebook, Twitter and Instagram. Junior Max, Mini Max and Micro Max were previewed first on Monday, with DD2 Masters and Masters Max set for today. Wednesday is a look at Senior Max and DD2, with coverage beginning on Thursday. 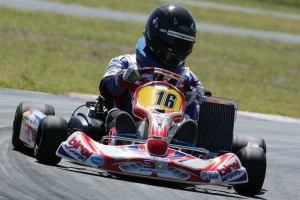 PSL Karting DD2 Masters
The last two years at the US Grand Nationals, the DD2 Masters division has belonged to veteran Alan Rudolph. With his departure to challenge the younger competitors in the DD2 category (more on that tomorrow), that has left the door open for a new champion to the category. That driver, however, may not be earning his first title.

The first half of the Rotax era in the United States, the ‘Mr. Rotax’ name went to Texan Jordon Musser. The four-time US Grand Nationals champion went three straight years in the Senior division (International as it was known back then), and followed it up with a DD2 crown in 2006 at Road America. After a sixth in 2007 at The Track in Colorado, Musser focused his efforts on car racing. The last few years, he’s been back behind the wheel, this time in shifterkarts. Now, the 3G Kart Racing/Birel driver makes his return to the US Grand Nationals for the first time in seven years. Should he become victorious on Championship Sunday, Musser will make history as the only five-time winner of the event (currently tied with Daniel Formal – last year’s DD2 champion).

It could end up becoming a Lone Star State battle for the national crown this weekend with 2013 runner-up Mike Jones set for a run at his first Rotax title. The Dallas Karting Complex/Sodi Kart USA veteran has two straight years of Team USA experience at the Rotax Grand Finals, following his Pan American Challenge victory in 2012 at The Track. Jones is looking for a third straight trip to the world championship, only this time he wants to clinch the ticket with a victory at the US Grand Nationals.

One driver who may have a leg up on them is former event runner-up Erik Jackson. The Baldozier Racing/Kosmic driver took part at the Rotax Summer Shootout, gaining valuable seat time at the track he earned his only Rotax Grand Finals ticket at in 2011. One of the original DD2 competitors every season is Conrad Park. The 62-year old exemplifies what Rotax Max Challenge racing is all about, enjoying his time at the Dallas Karting Complex series races, and visiting with longtime friends at the US Grand Nationals every year. More drivers are anticipated to enter trackside, filling up what is sure to be a great battle for the two Rotax Grand Finals tickets on the line. 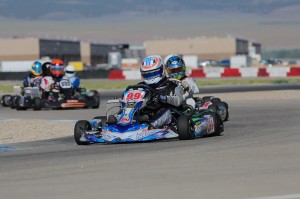 Full Throttle Karting Masters Max
The Masters Max category has been a classic category at the US Grand Nationals, and with another solid field over the 25 driver mark, this year is certain to be historic. A great mixture of drivers have scored victory over the past 12 years the category has been offered. Regular club guys, national level talent, and even professional motorsports drivers such as last year’s winner Max Papis have earned the US title. To the victor, or top finisher not yet qualified, goes a ticket to the 2014 Rotax Grand Finals in Valencia, Spain to compete in the DD2 Masters division.

Three former champions of the US Grand Nationals will be in the field, vying for a second crown. The latest is Todd Ulmen (Playthings Racing/Tony Kart) who won the DD2 Masters title in 2010 at New Castle Motorsports Park. He’s returned back to Rotax, and the Florida driver is ready to take on the challenging Masters field. Oregon’s Mike Daniel was awarded the 2009 victory after the provisional winner failed tech inspection. Daniel is among the highly talented drivers along the west coast, and makes his return to the US Grand Nationals since finishing 11th at Miller Motorsports Park in 2011. The third is the proclaimed ‘Mr Rotax’ of the Masters category, and among the original supporters of the RMC in the United States – Andy Seesemann. The Full Throttle Karting-owner is also the promoter of the Rotax Challenge of the Americas and So-Cal Rotax Challenge. When he’s not supporting the sport, he likes to jump in the seat from time to time. In 2004, he scored the Masters Max victory at the XPLEX, and is making his 13th straight start at the US Grand Nationals.

All eyes are however are on two of the top drivers returning from last year’s event. Scott Falcone was runner-up in 2011 to Brent Harper, fourth in 2012 at MRP, and runner-up again at GoPro Motorplex. Since 2009, he’s finished inside the top-12 every year. The Falcone Racing/Arrow driver was the provisional winner on Saturday until it was discovered in tech that he had used an incorrect carburetor part. Falcone then spent Sunday testing out different setups on Sunday, preparing to battle this week for his first US Grand Nationals crown. Falcone already has a ticket locked up for the Rotax Grand Finals, thanks to his runner-up result at the Florida Winter Tour in DD2 Masters, so it’s all in for the ‘Flyin Falcone’. Picking up both wins at the Rotax Summer Shootout was California driver Tyler Brooks. It was an impressive performance by the young driver, able to race the Masters division thanks to the 190lb. minimum weight for drivers under the age of 32. While he won’t qualify for the Rotax Grand Finals ticket, Brooks is like Falcone, going for the title itself aboard his TRB Kartsport/Kosmic entry.

Other quick drivers to watch that were among the contenders last year include the Ocala Gran Prix/Tony Kart duo of Scott Roberts and Robert Maier. Dean Boyd of the DKC/Sodi Kart USA operation was a top-10 finisher a year ago as well. Local drivers Ken Maxfield (Arrow) and Justin Peck (Tony Kart), carrying the MSquared Karting banner, were among the podium finishes at the Rotax Summer Shootout. Both have been championship contenders at the Rotax Challenge of the Americas the last two winters, and each are looking to add some US Grand Nationals hardware to their trophy case. Another driver making a return to the Masters Max division is John Crow. A provisional winner in 2009, Crow has always been a contender at every US Grand Nationals he has competed in. After two years of racing the DD2 Masters division, earning a spot on Team USA one year, Crow’s back to the nest of Masters Max racing. The Californian is scheduled to enter at the track, looking to better his third place results from the 2011 edition at Miller Motorsports Park.