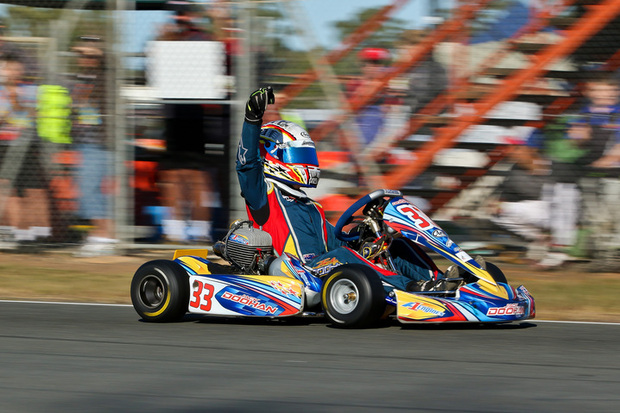 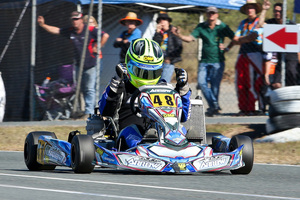 Doohan was victorious in the Rookies class, for drivers aged between nine and 12 years old.  He was one of nine winning drivers from the Sunshine State at the event.

With his father, five-time MotoGP World Champion, Mick Doohan watching from the sidelines, 11 year-old Jack was the pacesetter all throughout the event before claiming the win in the Championship Final by more than two-seconds.

Over the past few years I’ve finished on the podium in just about every State Championship I’ve raced in.  To get this win is a huge relief and I’m ecstatic, said Jack Doohan.

Doohan Senior described the win as better than winning yourself.

Like any father, watching your child be successful whenever they’re competing in a sport is a very proud moment it’s better than winning yourself.  I’m happy for Jack he’s worked very hard to get this win, said Mick Doohan.

So far this year Jack has been very consistent.  This win is courtesy of his hard work and the great team he’s got around him with Graham Powles as his mechanic and mentor along with Brett Arnett maintaining his engines. 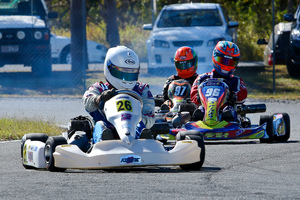 Toowoomba teenager William Brown upstaged local Whitsunday driver Jordan McGregor during the preliminary races in the Junior Rotax class, however, it was McGregor who won the race that mattered most.

McGregor led every one of the 16 laps in the final to add the 2014 Championship to his ever-growing resume.  Brown finished second ahead of James Litzow.  Brown also finished runner-up in the Junior National Light class won by Victorian Aaron Cameron.

Since stepping up into the Senior ranks at the start of 2014, Hayek has struggled to find the strong form he had in the Junior ranks.  Hayek believes his win this weekend came courtesy of the lessons he learnt from being a part of the CAMS (Confederation of Australian Motor Sport) Junior Development Camp recently.

Any State Championship win feels amazing, on the back of last year I was on a bit of a high but I’ve had a challenging six or seven months to start the year.  I got invited to the CAMS Academy recently and it has given me a whole new outlook, said Hayek.

It (the camp) taught me about how to get back on top of my game, a lot about nutrition, fitness and mental strength.  It also made me realize why I race karts and that I need to enjoy it.

The CAMS camp gave me the insight to look at the positives and how important it is to keep the core people around you happy, they all want the best for you.  Karting is very much a character building sport that plays a lot on your mind, you’ve just got to stay confident. 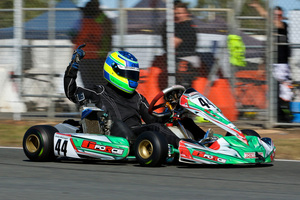 Another pair of Sydney-siders to come out on top were Cody Brewczynski, who got the better of an intense four-way battle to win the Junior National Heavy class, and Cody Gillis who won Junior Clubman.

In the youngest class of karting Cadets, it was Victorian Jay Hansen who took the win ahead of Brisbane youngster Bayley Douglas while Jay Schrodter and Mackay’s Bevan Garioch who won Senior National and Clubman Over 40s.