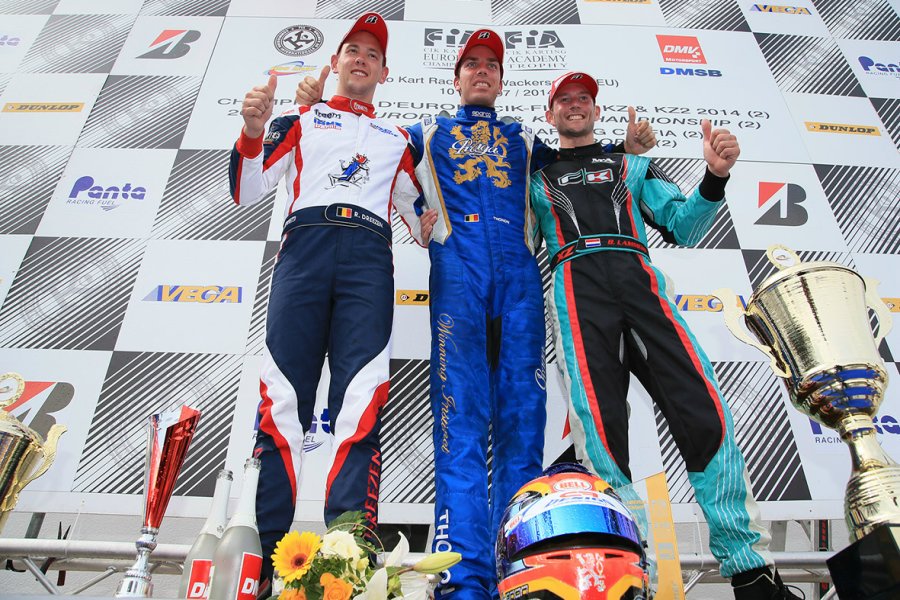 Upside-down standings after the second round of the European CIK-FIA Championship of Karting for the KZ and KZ2 categories. The German town hosted also the second round of the CIK-FIA Karting Academy Trophy. Today’s races were all very uncertain and full of thrilling battles until the finishing line: that’s why many drivers who didn’t win in the heats yesterday seized the opportunity to take centre stage. New names also in the championship standings: the race for the final victory has become as uncertain as ever, right before the last round of the event, on schedule in Kristianstad (S). Short but intense rainfall on the Bavarian circuit made the whole final day of this second round more thrilling, even though the weather did not influence the final results. On Wednesday 16th July, on Rai Sport 2, the pre-recorded broadcast of the Finals at 08.00pm. On the same channel, on Friday 18th, the special report with highlights of all the races of the weekend.

Thonon eventually wins in KZ
The KZ Final was definitely a thrilling one with six drivers ready to fight until the end. The Belgian Rick Dreezen (Zanardi-Parilla-Bridgestone) had a great start from the front row, leaving behind the pole sitter, the Dutch Bas Lammers (FK-Parilla-Bridgestone), winner of the Pre-final. The Italian Marco Ardigò (Tony Kart-Vortex-Bridgestone) followed in third positions, but he had to pull over soon for an engine issue. In the meanwhile, the Belgian Jonathan Thonon (Praga-Parilla-Bridgestone), who started from the eighth position, had joined the pack of top drivers together with the British Ben Hanley (ArtGP-TM-Bridgestone) and Jordon Lennox-Lamb (CRG-Maxter-Bridgestone) and the Italian Flavio Camponeschi (Tony Kart-Vortex-Bridgestone). Thonon managed to take the lead after few laps, while the positions behind him remained uncertain until the chequered flag. Eventually, the two other podium positions were conquered by Dreezen, second, and Bas Lammers, third. Dreezen, thanks to this result, is the new championship leader, 15 points ahead of the rather unlucky Ardigò. 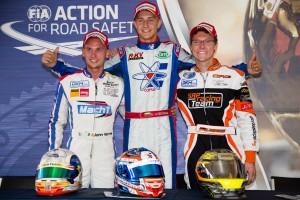 Juodvirsis in the lead in KZ2
The German Maik Siebecke (CRG-Modena-Bridgestone) had already exploited his skills in the heats, so it was no surprise when, at the start, he gained the lead of the Final moving from his slot in fifth row. The Czech Jan Midrla (Birel-TM-Bridgestone), the pole sitter, tried hard to re-gain the first position, but the German driver fended off his attacks and kept the leadership. In the meanwhile, lap after lap, the Lithuanian Simas Juodvirsis (Energy- TM-Bridgestone) accomplished his recovery from the 13th position: he managed to join the leading group and, finally, to conquer the head of the race. The battle for the runner-up position continued between Midrla and Siebecke until a contact made Siebecke drop back to fourth position. Joudvirsis won, followed by Midrla and the Irish John Norris (Mach1-TM-Bridgestone), third. However, Midrla was hit by a penalty for the contact with Siebecke, who gained the third step of the podium behind Norris. Today’s victory allows Juodvirsis to be the new leader of the Championship, seven points ahead of the Italian Andrea Dalè (CRG-Maxter-Bridgestone), who did not perform well this weekend.

American Gary Carlton (TB Kart-Modena-Bridgestone) suffered another up and down weekend. Posting the fastest lap in the final free practice, an issue hampered his speed in Qualifying and dropped him down the order. Carlton continued to be among the quickest drivers all weekend, and fought his way to a 10th position in the Final.

Vromant is the winner of the Academy
Great battles also in the CIK-FIA Academy Trophy, where the French Alexandre Vromant got the lead at half race, when he managed to prevail in a battle between five drivers: the Dutch Richard Verschoor, the Japanese Kakunoshin Ota, the Turkish Berkay Besler and the Dutch Rinus van Kalmthout (all on Parolin-FIM-Bridgestone). They finished the race in this order. Thanks to the points he scored today and the points gained after the victory in Genk (B), Ota is in the lead of the Championship, only two points ahead of van Kalmthout. American Michael Benyahia finished 26th, while Jared Cordova was unable to qualify through the Second Chance Heat.