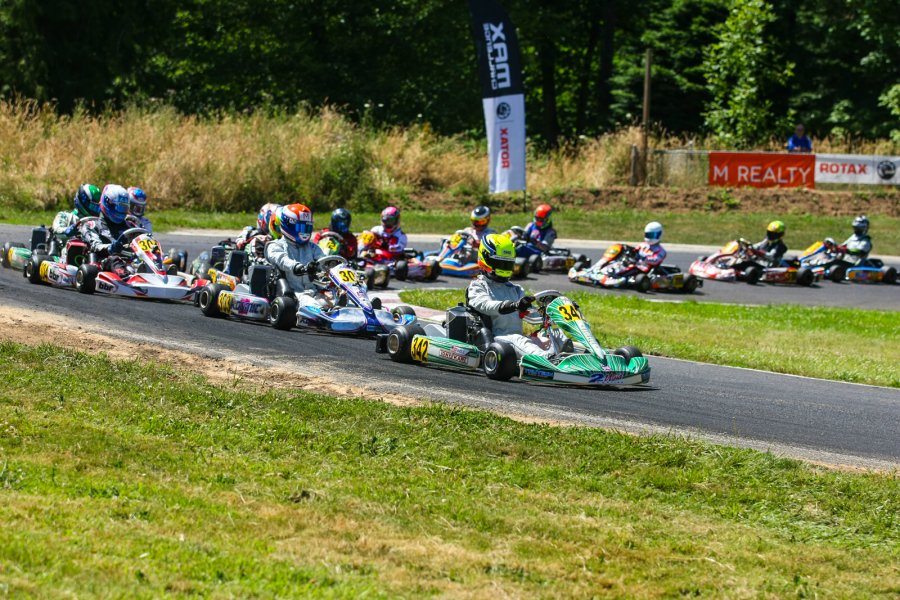 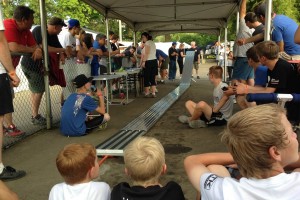 The championship chases in the Rotax Can-Am ProKart Challenge turned another page in the 2014 storybook, following the completion of events at the Pat’s Acres Racing Complex over the holiday weekend (July 4-6). Rotax Max Challenge and Superkarts! USA competitors from all around the western half of the country journeyed to the Canby, Oregon facility, taking on the challenging circuit that has seen a number of historical karting events in its past.

Over $6,000 in prizes were awarded on the weekend, including a Cold Stone US Grand Nationals entry to a Mini Max (Edward Portz) and Micro Max (Josh Pierson) drivers. Seven sets of tires, three 40” 3D flat screen smart televisions and $750 in Can-Am gift certificates were also among the prizes handed out by the series. Friday evening after practice on-track was over, a number of people took part in the competitive pinewood derby event that accompanied the complimentary dinner – which was completed with some great fireworks that evening to celebrate the Fourth of July holiday. A special Can-Am Rotax Max Challenge decal was created for the weekend, displaying the Red, White and Blue. 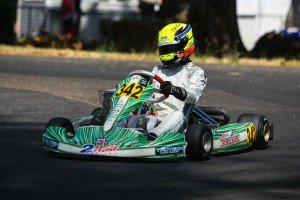 Twenty-one drivers filled out the Black Flag Racing Senior Max category on the weekend, and they were all chasing championship leader Jake Craig throughout the opening day of action. The top three in the championship chase went 1-2-3 in qualifying for Round Five, with Craig edging out Selliken by just 29 thousandths of a second while Canadian Bryce Choquer was just nine hundredths off the fast time. Craig drove away to a two-second win in the Prefinal as Choquer moved around Selliken for the second position. The 20-lap Final was all Craig, leading every circuit and pulling out to a five-second advantage by the checkered flag for his third victory of the season. Selliken was running second until lap five when he lost his chain, making a big impact on his championship chase. That promoted Choquer to the second spot for his fourth podium result while California driver Mason Marotta drove his way up to third in his series debut with the fast laps of the race. Local driver Dalton Egger and Artie Carpenter were fourth and fifth.

Craig began Round Six where he left off on the previous day, securing the fast time in the qualifying session with a 48.508-second lap. Choquer was second in the order with Andrew Zimmer posting the third quickest time. After losing the lead on the first lap to Choquer, Craig retained the top spot to lead the remaining circuits of the 15-lap Prefinal. Selliken, who started sixth, finished a close second with Choquer back to third. The top two checked out early from the field in the main event, with Craig at the point. Lap eight, Selliken took over the lead and posted fast laps of the race to the checkered flag, securing his third victory of the season. Craig settled for second, standing on the podium for his fifth straight race to maintain the top position in the championship chase. Egger earned his first trip to the steps as he edged out Choquer for the third position while Zimmer ended up fifth. 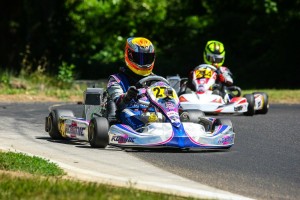 Utah driver Austin Versteeg added to his point lead over the weekend, earning wins number three and four in the Wicked Fabrication Junior Max division. Junior rookie Sting Ray Robb appeared to be the driver to beat on Saturday, securing the fast time in qualifying by a scant 67 thousandths of a second over Versteeg. Robb then went on to lead all 15 laps of the Prefinal, stretching out to a four-second advantage over two-time race winner Wick and Versteeg. The Final looked to be in Robb’s hands, until his pace slowed toward the end of the 20-lap event. Versteeg would catch and pass him for the lead, going on to earn his second victory of the weekend. Robb held on to second, finishing the race with a deflating rear tire. Wick completed the podium with Jessica Dezall with her best series finish in fourth and Stevie Pugsley Jr. in fifth.

Versteeg went on to sweep Round Six on Sunday, earning a perfect score to extend his championship lead. The Team USA 2014 driver cleared the field by two tenths in qualifying, and led all 15 laps of the Prefinal. The Final was another wire-to-wire performance, driving to a six tenths advantage over Robb as Wick bagged another third place result. Adam Smalley and Kellen Ritter garnered their best results on the season, ending up fourth and fifth. 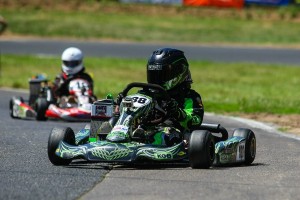 The championship chase in the Monster X Tour Mini Max division is sure to go down to the wire with five drivers still within 100 points of each other after the two rounds in Canby with Austin Torgerson and Jacob Blue Hudson earning victories. Torgerson swept Saturday’s Round Five racing, earning the pole position along with the Prefinal and Final wins. His first series victory was a wire-to-wire triumph over Enrique Jaime and Hudson. Jaime got the best of the Mini Max field Sunday morning as he clocked off the fastest lap in qualifying to earn the pole position. The opening lap of the Prefinal saw Jaime on the sideline after losing a wheel, which allowed Hudson to lead all 12 laps to the win and the pole position for the main event. Hudson never looked back, taking advantage of the front row starting spot to go flag-to-flag in the Final for his second victory of the season. Conner Wick finished four seconds back in second with championship leader Edward Portz in third.

The GoKart Hero Micro Max point leader Josh Pierson added to his advantage with two wins in Canby. Jonathon Portz was the top driver early on for Round Five Saturday, coming in as the top qualifier and scoring the Prefinal win. Portz was at the point for the first half of the Final, until Pierson powered by with fast laps of the race to secure the top spot and the victory. Crossing the line second, Portz was penalized to last position for a technical infraction, thus promoting Cooper Becklin to second and Max Wright to third. Sunday was Becklin’s turn at the point, redeeming his miscue on Saturday, as he duplicated Portz performance on Saturday with the fast time in qualifying and placing first in the Prefinal. He led the first three circuits of the main event until Pierson once again put himself into the lead. The top-six were nose to tail at the line with Pierson taking his fifth victory of the season. Max Wright and Becklin completed the podium over Ryan Dezall, Tyler Ruth and Ashton Torgerson. 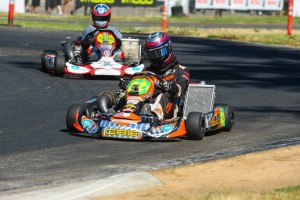 Kory Estell extended his S2 Semi-Pro Stock Moto win streak to three with a double-win weekend at Canby. Round One winner Marco Eakins was the top qualifier and winner in the Prefinal. Estell grabbed the holeshot to begin the Final with Eakins running second until a mechanical issue put him on the sidelines on lap five. That allowed Estell to drive away with the victory over Justin Walsh and Dustin Glenn. Estell swept Sunday’s action, earning a perfect score toward the championship. Eakins fought strong, but managed to only finish second with Walsh completing the podium. Ben Johnston swept the weekend in the S4 Master Stock Moto division, adding to his two previous wins at McMinnville. Johnston bested Randy Word and Chad Wallace on Saturday with Word and David Shepard rounding out the podium on Sunday. Joey Wimsett and Austin Versteeg ran uncontested in the S1 Pro Stock Moto and S5 Junior Stock Moto categories.

Colorado driver Sabré Cook and point leader John Buzza split the weekend in the DD2 category, as did Derek Wang and Scott Grimes in DD2 Masters. Cook and Wang each swept the Saturday round of racing in Canby, with Buzza and Grimes placing second. The following day, Cook was the top qualifier but a technical infraction took the Prefinal win away, giving it to Buzza. Cook advanced up to the lead in the Final, but a mechanical issue took her out on lap eight. That gave the win to Buzza, his fourth of the season. Wang also had issues on Sunday after scoring the pole position and Prefinal win. He retired in the main event on lap five, handing the victory to Grimes for his first series triumph. 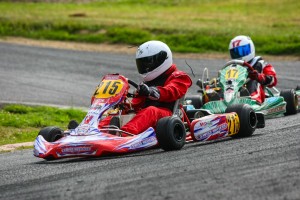 The MVP LO206 Senior class featured a record seven drivers, with Stepanova Nekeel stealing the main event victories on the weekend. The former US Rotax Grand Nationals winner was the top qualifier on Saturday, only to come in underweight and give Jonathan Brown the top spot. He won the opening heat race, but Nekeel fought his way forward to win the second, along with the feature race. Brown ended up second with point leader Bryan Green in third. Brown once again was the top qualifier on Sunday, only to see Nekeel score the win in both heat races. Nekeel led the field at the checkered flag for the main event win, with Brown a close third and Nick Ferguson third. It was a back and forth battle in the RLV LO206 Junior division between Jacob Gulick and Tyler Besuyen. Gulick came out on top in Saturday’s main event, edging out Besuyen by just a tenth of a second at the line. The two went at it again all day Sunday, and was going to be decided at the line until Besuyen retired on the final circuit, giving the victory to Gulick for his fourth of the season.

The series returns to action next month, as many of the Rotax Can-Am ProKart Challenge competitors will be competing at the Cold Stone US Rotax Grand Nationals in Utah and the Superkarts! USA SummerNationals at the Modesto Grand Prix in California. Rounds Seven and Eight are set for north of the border, at the Greg Moore Raceway in Chilliwack, British Columbia, Canada on the August 15-17 weekend. Visit rotaxcanamprokartchallenge.com and be sure to follow the series on Facebook for more information on the series finale.