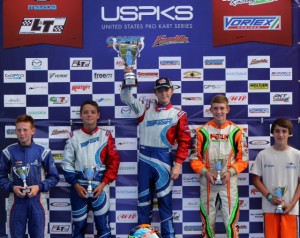 Top Kart USA, one of North America’s largest and fastest growing karting companies, continued to make a name for themselves in the past two weekends in national level competition. Competing at both the second round of the United States Pro Kart Series (USPKS) and third round of the World Karting Association (WKA) Manufacturers Cup, the race team side of the operation continued their winning ways scoring ten main event victories and thirty-eight podiums taking control of several of the class championships as both series pass the midway point.

The ever-consistent Zach Holden added three top-ten results to the Top Kart USA squad including a pair of second place podium results in Yamaha Junior. In Leopard Junior, luck would not be on Holden’s side as a seventh place result on Saturday was derailed by a DNF Sunday. Yamaha Pro driver Dakota Pasek continued his string of consistent results claiming fourth and tenth place results over the weekend.

Zach Holden leaves South Bend as the current point leader in the Yamaha 100 Junior championship with David Malukas second, only a mere 25 markers in arrears. Malukas is the point leader in Leopard 125 Junior while Holden sits fourth.

Only one week later, Top Kart USA would visit the MRP of South Bend facility yet again, this time for the WKA Manufacturers Cup. With several more Top Kart drivers in attendance, the Indianapolis-based squad claimed eight main event victories and a total of thirty-one podium results over the double race day weekend.

Entering four drivers in the Parilla Junior class, Malukas would be the most consistent of the bunch claiming third and second place results. Alexander Kardashian would add fourth and fifth place finishes with Holden claiming a third place podium result and Brendan Burcroff adding a fifth place finish.

Malukas would be the man to beat in Yamaha Junior as he managed to out pace the rest of the talented field of drivers. Scoring the main event victory both days, Malukas was joined on the podium by Holden who added another pair of podium results to Top Kart’s resume with a pair of third place finishes. Emerson Reed would throw his hat in the mix and come home with fourth and fifth place results. 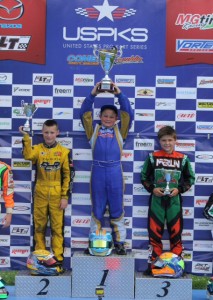 Giovanni Bromante found his way to the top step of the podium giving Top Kart another victory in 2014
(Photo: eKartingNews.com)

Kardashian would turn up the wick in the Komet Junior category claiming Saturday’s main event victory and following that up with a second place finish on Sunday. Adam Sturgill would be consistent in Komet Junior garnering a pair of fourth place results keeping his championship hopes alive with two event weekends remaining.

Bromante would also be back behind the wheel of a Top Kart this past weekend competing in Yamaha Sportsman, KPP Sportsman and Cadet Sportsman. Never finishing outside the top-three, Bromante scored one third place result, three-second place results and two main event victories over the six main events.

Calvin Stewart would be consistent in TaG Senior with a pair of third place podiums while twins Garrett and Jake Johnston would add three top-five finishes including a victory in Saturday’s Parilla Senior ranks by Garrett. Failing to place inside the top-five on Sunday, Jake flew the flag in Parilla Senior with fourth and second place finishes, the same two results that Steve Schiewer would attain in TaG Masters.

Kid Kart competitors Elliot Cox and Sebastian Wheldon continue to gain experience and improve with each and every outing as they ran in the top-five throughout the weekend. When the days had finally came to a close, Cox would secure fourth and third place results with Wheldon scoring fifth and eighth place finishes. A big shout out to Sofia Darrigo and Daniel Dvszelski IV for their solid runs in the Kid Kart ranks as well. Top Kart USA would also like to send an extra special thanks to Top Kart authorized dealer Championship Racing Performance (CRP Racing) for their continued support and development of the youth in the sport of karting.

Top Kart USA will now shift their focus to the upcoming USPKS event at the Pittsburgh International Race Complex over the July 25-27 weekend before heading back to New Castle Motorsports Park for WKA and USPKS events August 8-10 and 15-17.