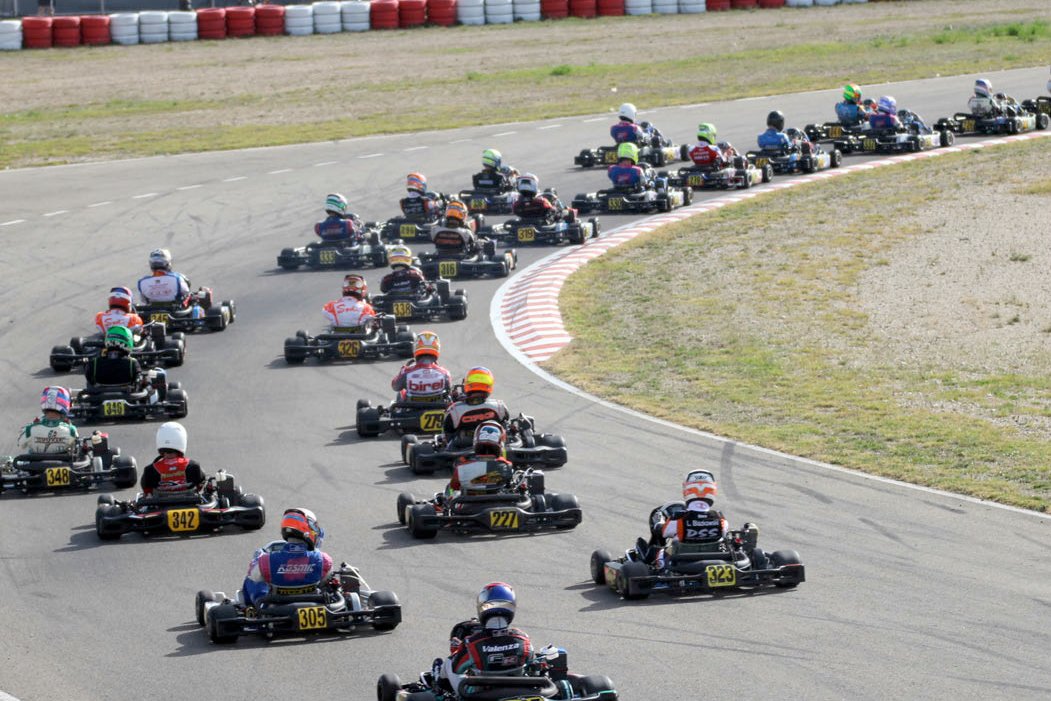 A hot halftime event is expected for the third round of the ROTAX MAX Euro Challenge. From 14th to 20th July the summer race under the burning sun of Spain promises to be the hottest of the season. Scene of action will be the Circuito Internacional de Zuera, situated in northern Spain right between the cities of Barcelona and Madrid.

The 1.700 metres long track is well-known to the European ROTAX elite as it is venue of the popular International Open for several years now. The Spanish karting complex comes with most modern facilities on the one hand and a quite uncommon track characteristic on the other. Highspeed is the keyword, which describes the fastest course of this years’ calendar best. According to experience, slipstreaming is the passport to fame in Zuera – a fact that not only the championship leaders of the three categories of junior, senior and DD2 have to consider.

In the junior class Thomas Preining (Team TKP) is the one to be beaten: The youngster from Austria won all races thus far, which puts him in an undoubted favourite role for the championship crown. A lot closer is the situation for the seniors.

The largest grid within the framework of the ROTAX Euro Challenge states Winter Cup and opening round winner Joseph Reilly (Strawberry Racing) from the UK in the leading position. But his fellow countryman Edward Brand (Intrepid Driver program) is only one point behind. Not to forget the reigning junior champion Guan Yu Zhou (Strawberry Racing) who proved to be a reliable candidate for podium. His outstanding talent recently grabbed attention from a very special level: He was appointed by the Ferrari Driver Academy, which opens him a promising perspective for his future racing career. Complementing the top drivers, one has to mention Harry Webb (Strawberry Racing). Actually aiming for formula racing in 2014, he missed the first ROTAX races of the season but gave a remarkable comeback at Castelletto by winning both final races.

In the direct drive category of DD2, title-holder Ben Cooper (KMS – Birel Motorsport) is till waiting for his first win of the season. Yet the reigning champion was the most consistent driver thus far and goes for Spain with the championship lead. But he really has to watch out for his opponents. The group of chasers is lead by opening round winner and runner up of the ranking, Jordan Lennox Lamb (CRG SPA). He is in a lurking position, which applies to Sodi’s spearhead Anthony Abbasse or the Strawberry-duo Andreas Backman and Sean Babington. Last but not least Martin Pierce (Praga Racing Team) aims to expand his lead in the DD2 Masters classification which Christophe Adams (Sonic Racing Kart) and lady driver Tamsin Germain (DG Racing) want to prevent.

“The halftime race is always a very special event in the calendar and from the sporting point of view a guidepost for the championship’s outcome. This year Zuera will host the third round and despite the holiday season we are pleased to welcome full grids in each category. Equally the Spanish round will be a small foretaste of the upcoming ROTAX International Open later this year. In October we will come back to Zuera, offering the chance to win seven last tickets for the ROTAX MAX Grand Finals in Valencia”, says Roland Geidel, CEO of the organising RGMMC Establishment.

Everybody is invited to join the race action in Zuera, as live TV coverage will start on Friday and continue throughout the weekend. So stay tuned on the official website www.rotaxmaxeurochallenge.com or www.rgmmcmedia.com, where you get all information regarding reports, photos, results and live TV stream.