The Superkarts! USA Rocky Mountain ProKart Challenge visited the SBR Motorsports Park in Calhan, Colorado during the June 20-22 weekend. The opening day of competition on Saturday raced beneath clear skies with picture perfect weather, while Sunday was completed in a rush to beat impending storms. Rounds Three and Four of the championship season saw repeats as well as first time winners over the course of two days of racing. After being shut out at the opening weekend of the series, Ryan Rudolph scored his first, and then second win of the 2014 season in S2 Semi-Pro Stock Moto. Rob Van Deren and Rayce Dykstra stayed perfect so far in 2014 in S4 Masters Stock Moto and Micro Max divisions.

The second weekend of the series was a unique event to say the least. SBR Motorsports Park is a staple of karting history in Colorado, and the opportunity to relish in the memories of past races was not lost on many long time Colorado karters. The Mount Rushmore of karting in the state could be found standing on the fence watching races, and standing in the pits working on karts. The weekend was full of fun and camaraderie as SKUSA staff treated racers to a cookout Friday night. On Saturday night, Rocky Mountain ProKart Challenge director Stan Bryniarski challenged mechanics to a rental kart race. On the line was a free entry to Round Five of the series in Grand Junction next month. To sweeten the pot, Bryniarski announced that if all the tuners in the race could beat him, Bryniarski would throw all the tuner’s names in a helmet and would draw one to receive a free entry to this year’s SuperNationals, for the tuner’s driver. TaG Senior driver/tuner Brandon Southwick won the tuner race, while Bryniarski was roughed up on track by CRG-USA cronies Stacey Cook and Gary Davis. After being spun twice by the CRG-USA mechanics, Bryniarski finished dead last. A man of his word, Bryniarski had Ivy Seigel – wife of SBR owner Lee Seigel – pull a name out of his helmet. Winning the free entry to the 18th annual SuperNats was Stacey Cook for his daughter, S1 racer Sabré Cook. 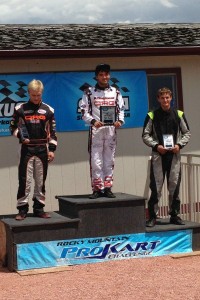 Coming into the weekend at Calhan, the action in the S2 Semi-Pro Stock Moto class was intense. In Grand Junction, Lindsay Brewer secured her first series win as she took the checkers in Round One on Saturday, while Tase Flores scored the Round Two win on Sunday. Round three began with Flores laying down an impressive lap around the tight half-mile course. Edging Ryan Rudolph out by less than a tenth of a second, Flores earned the pole position with a 38.607 second lap time. Flores was solid Saturday afternoon as he won both heat races. The first heat race saw Flores hold off S1 racer Sabré Cook for the overall win, with Cook getting the better of Flores with a last lap pass in Heat 2. The main event was all Flores – until the end. Flores paced the field for 17 of the race’s 20 laps, until he slid wide on the exit of turn one and did a half-spin at the top of the track. The move allowed Cook to take away the overall lead, while Rudolph sped by to take the S2 lead and win. Flores settled for second, with Brewer standing on the podium in third.

Sunday looked to be a carbon copy of Saturday, except for the weather. Once again it was Flores besting all shifter racers for the overall pole position. Rudolph was placed at the back of the field, missing a transponder for the timed session and forcing him to start the first heat at the back of the grid. When the flag dropped on the first heat race, Flores took off to another early lead. Myles Marolt stalled on the grid, forcing Rudolph and others to take definitive action. A short two laps later, Rudolph was pushing his kart off the final corner due to a mechanical issue. Flores drove to his third heat race win of the weekend. Again, heat two was a copy of the first, as Flores went wire to wire and picked up the win. Rudolph was forced to sit out the second heat race all together due to lengthy repairs from the mechanical issues from the first heat race. The main event was run under threatening skies, and strong winds blowing from the west. Flores got a great start and jetted out to an early lead, while Rudolph charged hard from the back. By lap five of the 20-lap feature, Rudolph had caught and passed Flores for the lead. Rudolph quickly pulled away and checked out from the field. As the race passed halfway, rain began to fall. After an additional five laps, the race was called complete at 15 laps. Rudolph scored his second win in as many days, while Flores would again settle for second after dominating the day. Marolt joined the two on the Round Four podium. 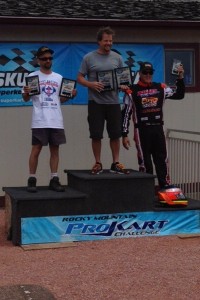 S4 Masters Stock Moto belonged to Rob Van Deren, who won both rounds at the Grand Junction opener. Each day, Van Deren dueled with Norbert Laczko for the win, while Mike Urban joined the action Sunday – despite having no previous track time or practice on the unfamiliar track. S1 Pro Stock Moto Sabré Cook ran uncontested and scored the weekend’s victories.

Rob’s son Max Van Deren drove to back-to-back wins in the Mini Max class, as he too raced uncontested. Joining Mini Max on the track were Micro Max racers Rayce Dykstra and Braden Hindson. Dykstra scored the victories in the Micro Max class, as Hindson drove to a pair of second place finishes.

The final class to run each day was the local option, Briggs & Stratton LO206 class. Rodney Ebersole battled Norbert Laczko on track. Despite Ebersole racing in the heavier Masters class and Laczko competing in the Senior class, the two battled closely with each other all weekend. The highlight of the weekend came on Sunday when Brandon Southwick – a TaG Senior – joined the Briggs racers on track. Southwick spent the entire first heat race literally bump drafting each Briggs racer past the other each trip down the front stretch. The first heat race ended with Ebersole beating Laczko by two thousandths of a second. The three drivers elected to make their second heat race their main event in an effort to beat the weather. The main event was a copy of the first heat race as Southwick pushed each Briggs driver around the track, helping them achieve the fastest lap times they had all weekend. When the checkered flags flew on the weekend, Southwick had won Round Four in TaG Senior, while Ebersole and Laczko won their respective Briggs classes both days.

The Rocky Mountain ProKart Challenge now takes a break until the late August when they will return to Grand Junction Motor Speedway in Grand Junction, Colorado for the final weekend of the championship season. For more event details and to sign up, be sure to visit the Rocky Mountain PKC section of the Superkarts! USA website. You can also follow the series on Facebook.